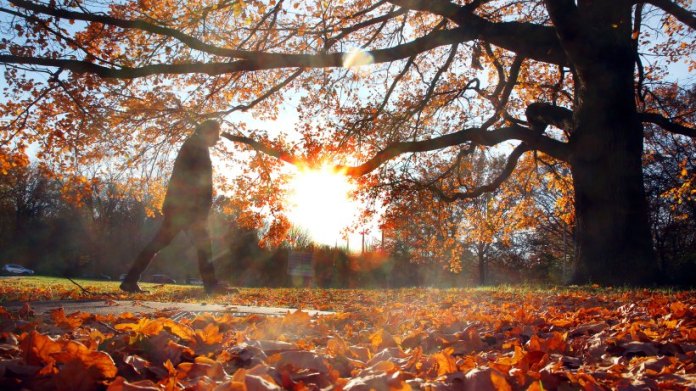 Get some fresh air: This is probably the best thing you can do in the partial lockdown. Ten particularly beautiful walks in and around Berlin.

Berlin / Brandenburg. Fresh air is good – especially in Corona times. Grandmother once said that a walk in nature strengthens the immune system. And such a walk in partial lockdown is also allowed, unlike many other things. Along the water, across the forest or through parks or through previously undiscovered street canyons: We present ten particularly beautiful routes.

From Tempelhof to Lichterfelde: Always along the Teltow Canal

The walk begins not far from the Ullsteinstraße underground station with a view over the Tempelhof harbor. You can discover the Ullsteinhaus, the Benjamin Franklin University Hospital and the “Mäusebunker”. The wonderful route along the Teltow Canal is around eight kilometers long, and you should plan around three hours for it. Along the Teltow Canal from Tempelhof to Lichterfelde: Here is the route.

Middle: Discoveries in the Hansaviertel and the Tiergarten

From autumn idyll in the zoo to modern housing from the 1950s: this walk offers a lot of variety. Our description provides interesting information about the Hansaviertel, a route map and tips for a small, tasty snack “to go”. Discoveries in the Hansaviertel and the Tiergarten: You can find the complete article here.

The Wuhle-Hönow-Weg is one of the 20 official hiking trails that run through the whole of Berlin. Our walk starts at the Hönow underground station. It has two quite different stages: first a lot of nature and then an interesting passage through new housing developments in Hellersdorf. The route ends at the “Wuhletal hiking trail”, so the route can be extended as desired. On the way on the Wuhle-Hönow-Weg: Click here for a complete description with a map.

Pankow: Eastern Weissensee – where ruins stand next to new buildings

The eastern Weißensee is unknown to many Berliners. We think it’s worth a trip. Our walk through the streets to the east of the lake not only leads past well-kept single-family houses and family-friendly new buildings, but also past historical relics that reveal a lot about the city’s history. If you want to extend the walk, you can take a lap around the lazy lake at the end. Eastern Weissensee – where ruins stand next to new buildings: Follow this link for a full description.

Best of Berlin – here you will find more ideas for discovering Berlin:

Treptow-Köpenick: Colorful leaves, blue water – a walk on the Dahme

Did you know that the Grünau forest and lido is the oldest lido in Berlin? On this walk you will pass it – and a lot more, for example the former radio station Grünau and the famous “Bammelecke”. In the Richtershorn district there are neat houses on the shore, at the end of the route there is a wonderful view of Lake Seddiner. On the long way from Grünau to Schmöckwitz, the tour can be shortened at any time with the 68 tram. Get some fresh air – and always along the Dahme: Read more here.

“11 kilometers full of highlights”: This is how our author describes the discovery tour in southwest Berlin from the Wannsee S-Bahn station to the Kohlhasenbrück exclave. Among other things, the old main railway bridge can be discovered. It originally spanned a section of the Avus, which was replaced because of its course after the wall was built. Nowadays the bridge is a meeting place for graffiti artists. The route is also suitable for cyclists. Historical border crossing in southwest Berlin: Here you can find the complete article with route map.

Treptow-Köpenick: Discoveries to the right and left of the Kaisersteg

This walk leads from Nieder- to Oberschöneweide with its revitalized industrial areas. It is five kilometers long and takes about two hours. The “Documentation Center Nazi Forced Labor” is also passed. At the time of National Socialism, there were around 3,000 camps for forced labor in the Berlin urban area. The one on Britzer Strasse is the only one that has been almost completely preserved. From Kaisersteg one has a wonderful view Discoveries on the right and left of the Kaisersteg: Here you will find the exact route description and all information.

Tempelhof-Schöneberg: On the way on the south-west parade

Strollers will love this stroll along one of the most beautiful streets in Berlin. And on the Friedenau cemetery, officially: “Friedhof Schöneberg III”, there are old trees and deceased celebrities. The graves of celebrities such as Marlene Dietrich, Helmut Newton and Horst Bosetzky, who has written many crime bestsellers under the pseudonym -ky, are to be visited. The walk is four kilometers. It starts at Bundesplatz and ends at Breitenbachplatz underground station. Out and about on the Southwest Corso: Read more here.

The walk leads along the S-Bahn line through the Volkspark Humboldthain and from there over the Mauerpark to the Kollwitzkiez. Otherwise populated by tourists, it is currently much emptier in this popular corner of Berlin – also because of the cold temperatures. The Berliner Wasserbetriebe have just opened a new storage canal, Berlin’s largest “water parking lot”, twelve meters below the Mauerpark. It holds 7,611 cubic meters, which is the equivalent of 60,000 full bathtubs. The major construction site left its mark on the main entrance to the Mauerpark on Eberswalder Strasse. For many months, construction vehicles and containers occupied space. Now the portal has been restored – and more than that: it now also serves as a small open-air museum of the Cold War. From Trümmerberg to the water tower: Here is the description of the route.

Potsdam: weaver houses, castles and lots of green in Babelsberg

The walk through the Potsdam district leads through the Weberviertel to Babelsberg Palace and back to Babelsberg S-Bahn station. Babelsberg Castle offers a wonderful panorama over the Tiefen See and Glienicker Lake with a view of the Glienicker Bridge. The approximately six-kilometer route takes two hours. Curious? Weavers’ houses, castles and lots of green in Potsdam-Babelsberg: this is the way to go.

The ten best shops for hard liquor in Berlin

Simply do it yourself: ten shops for hobbyists in Berlin

Hellishly hot: a visit to the “Pfefferhaus” in Friedrichshain

1000 kinds of sweets in the “Sugafari” in Prenzlauer Berg

Why a visit to the “Chuchichäschtli” is worthwhile

Trump gives up his blocking stance

Microsoft is planning a big change for the taskbar Germany: Seehofer on controls: police do not just wave through –...

Messi: FC Barcelona disputes “dragged around with me”