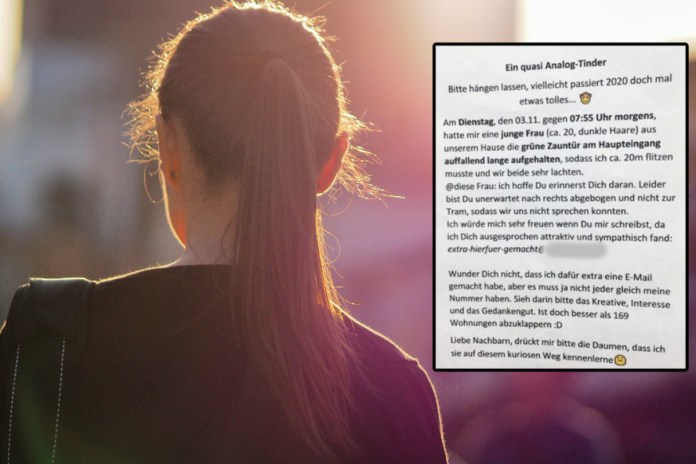 That’s what you call love at first sight. At the beginning of November, a young woman in Berlin-Lichtenberg had opened the fence door for a man.

Berlin – Sweet or was it just a nice touch? A man from Berlin-Lichtenberg has apparently hit it hard. Instead of searching through dating apps like Tinder or Happn, he tries to post a notice in the stairwell.

A 20-year-old woman with dark hair had “kept the green fence door at the main entrance open for a noticeable long time on Tuesday, November 3rd, so that I had to dash about 20 meters and we both laughed a lot,” he wrote in Notes of Berlin.

However, since she unexpectedly turned right and apparently did not have to go to the tram, there was unfortunately no conversation. He would like to make up for that, “because I found you extremely attractive and personable”.

But so that not everyone has their number immediately, the charmer has set up an e-mail address. “Please see the creative, the interest and the ideas. It’s better than rummaging through 169 apartments.”

All that’s left to do now is to have his neighbors play along so that something great might happen in 2020.

A discussion promptly arose in the comment columns on Instagram. While the vast majority of users think the action is sweet and romantic, some web followers see it differently.

“I mean, that’s cute, but I can absolutely imagine the situation that she just wanted to be nice to a stranger and he immediately sees it as flirting – I think it’s just a shame when things are always so sexualized and somehow this effort is already intrusive, “explains one user, for example.

However, it is not known whether the search was crowned with success.

Quick Resume – Microsoft is expanding the list of compatible games