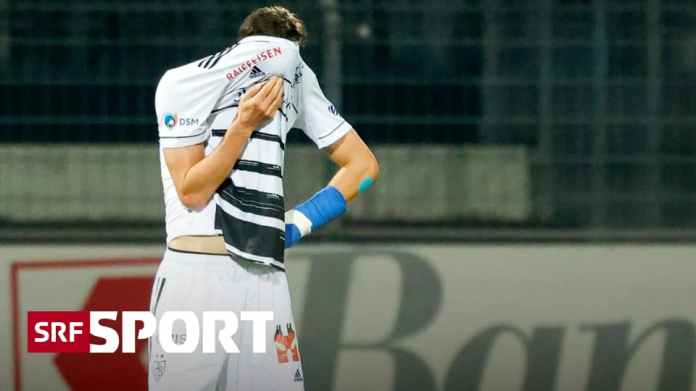 FC Basel suffered the next setback at FC Lugano on Sunday afternoon. The team from Ciriaco Sforza trotted off the field as a loser for the fourth time this season. In Ticino, the Basel team lost a point at the last second and lost 0: 1.

I’m pissed off. We mustn’t give up a game like that. We have to look at ourselves in the mirror and also question a few things.

However, due to the total success, the Luganesi did not have a party mood. Trainer Maurizio Jacobacci was satisfied with the result and the table situation – Lugano is second behind YB – makes the 57-year-old positive. Nevertheless, he keeps the ball flat, especially with regard to the further course of the season:

The goal is not to get off. We have to stay humble because we are FC Lugano, not Basel, YB, St. Gallen or Lucerne, who have completely different options.

The Bernese Young Boys are getting better and better. After the big step towards the sixteenth finals in the Europa League, things are going like clockwork in the championship too. The 3-0 win against Lausanne in the newly opened Stade de la Tuilière was hard to beat in terms of sovereignty. Trainer Gerardo Seoane knows why YB has continued to improve in the last few weeks.

Something has grown together, both in terms of team spirit and on the pitch. The automatisms begin to work better and that is reflected in the performance.

Lausanne trainer Giorgio Contini meanwhile saw no reason to worry about the clear defeat. Instead, he made a wreath for the enemy.

YB was superior, we just have to accept that. But we were also not efficient and determined enough. We had a good start to the season and now we have to get back on track.

On Saturday, Servette was no match for Lucerne at home. In the end, it was 1: 3 from the point of view of Geneva, who thus took over the Red Lantern. Servette trainer Alain Geiger but didn’t want to paint the devil on the wall yet.

There is no panic. We don’t always have to look at the table, we play better, work better and stay positive. It’s too early to talk about relegation.

Its counterpart at FC Luzern, Fabio Celestini, the relief about the 1st win in the 8th game of the season was written on the face. He exulted:

The team did a great job. Victory is very important to us for self-confidence.

There was also a good atmosphere at FC Vaduz on Saturday evening. The 4-1 win at home over Sion was the first since August 7th (in the barrage against Thun). Of course was a coach Mario Frick full of praise.

I am a happy man today. We put on an outstanding performance. The win was well deserved and I am glad that the team has rewarded themselves for the effort.

The mood in the Sion camp was of course completely different. president Christian Constantin spoke in Look of a “catastrophe” and a “nightmare” and appends:

If you lose to the bottom of the table, it means we have to put ourselves immediately into the mode of fighting relegation.

The Valais will have the chance to turn things around next Wednesday. Then FC Sion will make a guest appearance in Lucerne. And Servette (at home against Zurich) and Lausanne (at home against Vaduz) could already strike a tone of satisfaction again.

Cathy Hummels without pants on the road – fans confused: “Something’s...

Coronavirus in Germany: Ramelow notices “that the hut is on fire”...

Teachers should report twice a week