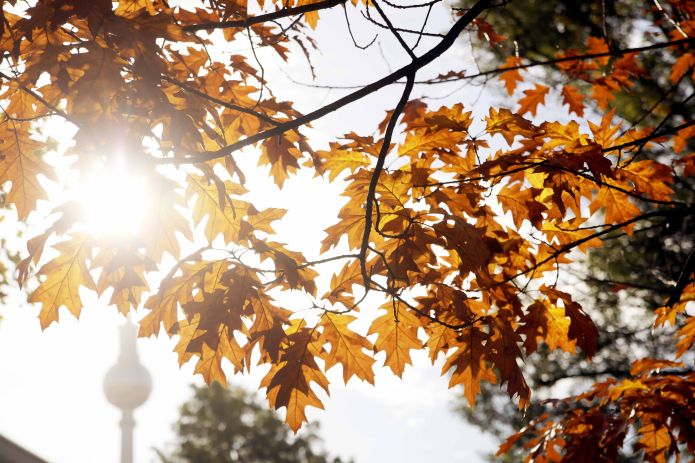 Berlin was the warmest region in Germany in autumn. The average temperature reached 11.5 degrees in the months of September, October and November, according to a preliminary assessment by the German Weather Service (DWD) on Monday. Nationwide, a temperature of 10.3 degrees was measured in the third season. Compared to the long-term Berlin average in the reference period from 1961 to 1990, temperatures in autumn were two degrees higher.

According to the DWD, autumn 2020 was the fourth warmest in Germany since weather records began in 1881. Only the years 2006 with an average of 12 degrees, 2012 with an average of 11.1 degrees and 1982 with 10.4 degrees recorded a warmer autumn. The late summer weather in the first half of September contributed to the values ​​- in the middle of the month there were again highs of well over 30 degrees. The preliminary balance is an initial evaluation of the approximately 2000 DWD measuring stations.

Weather change just in time for the beginning of winter

In the new week, people in Germany can expect a brief change in the weather. “Just in time for the start of the meteorological winter on December 1st, it seems to be getting in touch and playing with its muscles for the first time,” said meteorologist Lars Kirchhübel from the German Weather Service (DWD) on Sunday.

The week starts on Monday with a cloud-sun mix. The maximum values ​​are between 0 and 5 degrees, at the North Sea it is up to 8 degrees. In the night on Tuesday clouds then gather over Germany. According to the DWD, in the south and east there can be snow or sleet down to the depths, and sometimes freezing rain. There is an increased risk of slipperiness. According to the forecast, it will remain cloudy during the day, and it may snow in the east and south of Germany. The maximum values ​​are between 0 and 5 degrees.

Also read: What Amira Pocher is now revealing about her child >>

Already on Wednesday the sky over Germany loosens again, the temperatures rise to 2 to 7 degrees. In Berlin, however, it only gets really cold: After a maximum of 3 degrees on Monday, the weather service Wetter.net predicts a daily maximum of 2 degrees for Wednesday and 0 degrees for Thursday. The daily lows are therefore minus 1 degree on Wednesday and minus 4 degrees on Thursday. However, it will be sunny on these days, according to Wetter.net forecast.

Foreign exchange: the strength of the dollar pushes the euro below...

Vaccination chaos in Germany: “Loss of time and delivery chaos are...

If Covid-19 develops like the flu: New strategies for long-term dealing...