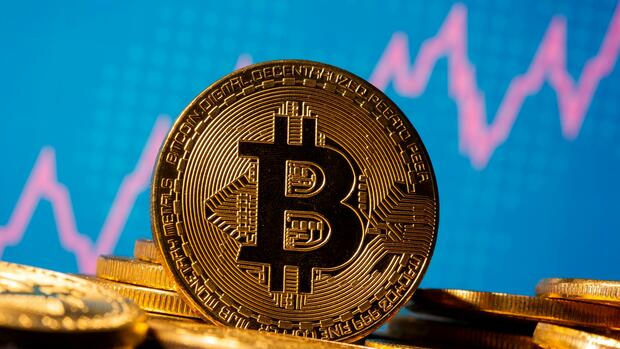 Bitcoin
In the past two months, the Bitcoin price had almost doubled and set to jump above its previous record high of just under $ 20,000.

Frankfurt After Bitcoin lost almost ten percent of its value on Thursday, the price initially recovered on Friday morning and temporarily stood above 17,300 dollars. But the price of the digital currency has not stabilized, because a little later Bitcoin slipped again to 16,610 dollars at times.

Profit-taking after a soaring price had caused the oldest and most important cyber currency to plummet by more than $ 3,000 within a day the previous day, to as much as $ 16,292.

Naeem Aslam, chief market analyst at the brokerage house AvaTrade, said that there was nothing to worry about. The correction offers investors who have missed the previous rally the opportunity to enter.

The LLBW, however, warned against buying the digital currency too quickly. Small investors who invest in Bitcoin “play roulette with their money”, explained digitization expert Guido Zimmermann in a study on Thursday afternoon. According to Zimmermann, Bitcoin has a “highly speculative character”.

In competition with later developed cryptocurrencies, Bitcoin is likely to lose in the long term, according to Zimmermann. In the medium term, the central banks wanted to introduce digital currencies themselves, which would then have the state blessing.

In the past two months, the Bitcoin price had almost doubled and set to jump above its previous record high of just under $ 20,000. The slump on Thursday now narrowed the Bitcoin rally this year to around 130 percent.

Opinions on the Bitcoin hype are divided anyway. Fans of the cryptocurrency argue that Bitcoin serves as a hedge against a weak dollar as a result of a loose monetary policy – quasi as a “safe haven.” This is how investors often refer to gold. The precious metal is considered a classic safe-haven currency to protect the value of investments in troubled times, regardless of price fluctuations on the stock and bond markets.

In contrast to the precious metal, Bitcoin has a higher volatility in the long term and is therefore exposed to higher risks. In addition, unlike gold or stocks, Bitcoin is not covered by a specific equivalent value.

Already three years ago, the cryptocurrency crashed in an unprecedented way, from a record high of $ 20,000 to $ 9,400. But advocates of the digital currency argue that unlike the record high in 2017, institutional interest in Bitcoin has increased massively, for example from advocates such as Fidelity Investments and JP Morgan Chase.

At the end of October, the US payment service PayPal decided to recognize Bitcoin as a means of payment from 2021. And just this week, the asset manager Van Eck launched a Bitcoin ETN on the German stock exchange Xetra, with which investors can participate directly in the development of the crypto currency without having to buy it themselves.

But until Bitcoin is suitable for the masses, investors will have to continue to be prepared for high volatility. In addition: A few large crypto investors, so-called whales, own most of the Bitcoin.

According to a study by the market research company Flipside Crypto, around two percent of anonymous accounts own 95 percent of the digital currency. This structure suggests the risk of large price fluctuations if large investors sell some of their shares.

More: The scary comeback of cryptocurrencies.

The recipe of the week: Hut food for the living room:...

Anthony Fauci on his relationship with Donald Trump: “I was the...

Now the pop star breaks his silence for the first time