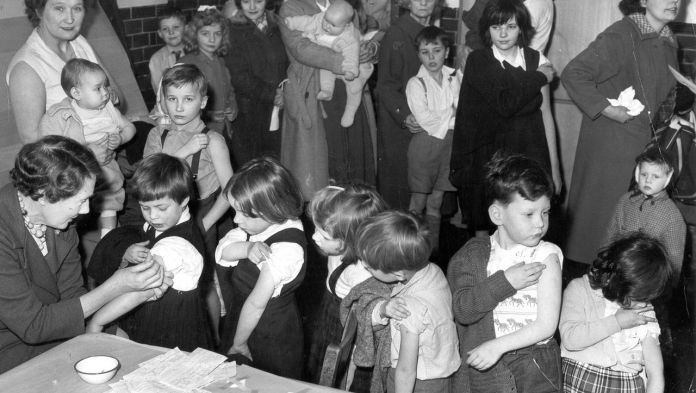 A cook from Somalia was the last to be infected by the virus – Ali Maow Maalin was diagnosed with smallpox in October 1977. Soon after, on May 8, 1980, the World Health Organization (WHO) announced: “Smallpox has been eradicated all over the world.”
This was the first and so far only time in history that mankind succeeded in permanently defeating an infectious disease. An unprecedented vaccination campaign by the WHO across all ideological rifts had put an end to what was probably the most dangerous epidemic in the world, which had been rampant for thousands of years.

Alexandre White from Johns Hopkins University explains to what extent the fight against smallpox is a role model in the fight against corona and what conclusions can be drawn from other historical strategies for coping with the disease.

SPIEGEL: Several companies have developed vaccines against the coronavirus – is the pandemic coming to an end soon?

To person
Alexandre White (Born 1988) is a lecturer at Johns Hopkins University in Baltimore (Maryland). In his book project “Epidemic Colonialism: A Social History of International Disease Response,” the doctor of medicine and sociologist examines the social impact of epidemics in history and the international coping mechanisms.
White: The reports are encouraging, we are definitely on the right track. It is very likely that we will be able to get the virus under control quite soon, at least in some regions of the world, above all in Europe and the USA.

SPIEGEL: Provided that the majority volunteered to be vaccinated. In the United States, many African Americans distrust vaccination even though they are disproportionately affected by the pandemic. According to a study from September 2020, only 32 percent of black Americans want to be vaccinated against corona. Why?

White: The mistrust is rooted, on the one hand, in current failures in health policy by the government, and on the other hand, it is historically based. Black people were abused for medical purposes even before the USA was founded. Think, for example, of James Marion Sims, who is considered the “father of US gynecology”: In the 19th century, he carried out experiments on enslaved women without any anesthetic. Then there was the 40 year Tuskegee syphilis experiment on hundreds of black men that began in 1932. And the forced sterilization of black, indigenous and Puerto Rican women in the 20th century. These are not isolated cases, but examples of medical violence that minorities in the United States were exposed to until the 1970s. Something like that leaves traces in the collective memory.


It was the last documented case of smallpox: Somali chef Ali Maow Amaalin (photo from 1977)

SPIEGEL: Thanks to a global WHO vaccination campaign, smallpox was completely eradicated worldwide – a model for combating corona?

White: Only to a limited extent, as the two diseases are quite different. I doubt that we can simply eradicate Sars-CoV-2 because, unlike smallpox, the virus can also be transmitted from animals to humans. In addition, the history of smallpox eradication shows that a vaccine alone may not be the ideal solution: Although the English doctor Edward Jenner experimented with a vaccine as early as 1796 and vaccinations existed in industrialized nations as early as the 19th century, it is estimated that they died worldwide in the 20th century 400 million people from smallpox.

SPIEGEL: In 1967 the WHO started compulsory vaccination, and the virus was eradicated within twelve years.

Rose Water and Racism: Dealing with the Disease in the Past

White: To achieve this goal, health workers, for example in India and Bangladesh, sometimes used force and brute force. The people were not adequately enlightened and taken seriously, but treated as defenseless recipients of a health policy from above. The study by the US historian Paul Greenough from the University of Iowa shows that these brutal methods of the 1970s could have permanently reduced the willingness to vaccinate particularly vulnerable population groups. To dispel such suspicion, future mass vaccination campaigns should be large-scale, empathetic, and decent.

SPIEGEL: Before a vaccine can even be vaccinated, a vaccine must first be accessible to everyone.

White: This is exactly what worries me a lot. We tend to look at the pandemic problem too much from our perspective, i.e. from an EU or US perspective, neglecting large parts of the world, such as the global south. The history of disease control shows how fatal such egoism can be.

SPIEGEL: Please give an example.

White: Take the third plague pandemic that broke out in China in the late 19th century. When the epidemic reached Cape Town in 1901, the black population was forcibly relocated to a quarantine camp on the periphery. This action provided a model for the urban township system that would become one of the most visible hallmarks of apartheid in the 20th century. The pandemic was reacted to with segregation, racism and brutality – the lives of Europeans, Americans, and white South Africans seemed to be worth more than the lives of other sections of the population. 15 million deaths, mainly in India and China, were the result; to this day there have been repeated outbreaks of the plague. Anyone who, like Trump, has called the corona pandemic a “Chinese plague” must be clear about it: Exclusion, racism and xenophobia only slow down the pandemic fight.

SPIEGEL: Covid-19 is often compared to the Spanish flu. The virus eventually weakened.

White: Epidemiologists and historians still do not know exactly what led to the decline of this devastating pandemic. The lesson the Spanish flu teaches us, however, is clear: indulging in temptation and leaning back prematurely just because the number of cases in your own country is currently low can be fatal. The third wave of the Spanish flu, which began in the spring of 1919, hit US cities particularly hard.

SPIEGEL: You also took a close look at the AIDS control strategy. What conclusions can be drawn from this?

White: When the disease emerged in the United States in the 1980s, the public responded with stigma and homophobia and the government with indifference. US President Reagan didn’t say the word until 1985, when more than 6,000 Americans had died. This shameful inactivity and bigotry left the population in a false sense of security. Thousands of deaths were the price. AIDS has shown that to fight an illness effectively, you need insight and public will.

White: That we can’t just focus on vaccines. Rather, broad data collection is essential, as is international aid. The number of infections in West Africa fell significantly long before a vaccine was developed because the extent of the spread was known and attention was paid to hygiene measures, social distancing and quarantine.

White: Naturally. It is only a matter of time before the next epidemic breaks out.

SPIEGEL: How should we be prepared for this?

White: If there is one lesson that we should learn from history, it is the fact that pandemics do not respect national borders, but can strike globally and affect anyone, regardless of their origin, skin color, gender or social class. That is why they must be fought globally. And not with violence, but with comprehensive education, cooperation. And with the understanding that our health is not an individual good, but depends on others. To do this, however, we must first learn to really put ourselves in other people’s shoes. The only thing that helps in the long run is empathy. Only when we muster this compassion will we not only fight corona, but also future pandemics effectively.

Barr contradicts Trump – Moscow is said to be behind the...

Load, stamina, breaks: Dynamo coach Kauczinski has that “in mind”

The risk of depression increases around menopause