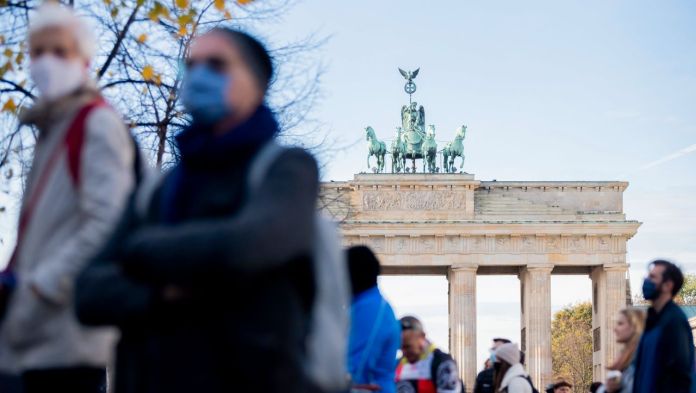 In the past few months, every adopted corona measure was sooner or later crushed in the small and small of the countries. New advances from Hesse, North Rhine-Westphalia, Schleswig-Holstein and Berlin now show: Even the Christmas season will probably not be able to do without this back and forth.
It was only on Wednesday that the federal and state governments agreed on tightened measures for December, but moderate easing of the contact restrictions over the holidays. Hotels should remain closed for tourist overnight stays until at least December 20th. In an interview with RTL, Chancellor Helge Braun (CDU) had already indicated on Thursday morning that the ban should continue to apply over the holidays: “We also assume that we will have to extend this into January.”

Now Schleswig-Holstein’s Prime Minister Daniel Günther (CDU) has announced that it will allow hotel stays. From December 23 to 27, a maximum of two nights are allowed, according to a special session on Friday. Berlin, Hesse and North Rhine-Westphalia had previously announced that they would not support the overnight stay ban either. Much to the annoyance of the head of the Chancellery.

Anyone who goes on a trip with relatives “must have the chance to stay the night somewhere,” said Hesse’s Prime Minister Volker Bouffier (CDU). North Rhine-Westphalia Prime Minister Armin Laschet (CDU) and Berlin’s Governing Mayor Michael Müller (SPD) also stated that such overnight stays had no tourist background.

Braun criticized the plans on Thursday evening in the ZDF program “Maybrit Illner”: You could not control plans to stay overnight, there was a risk of a tourist offer through the back door.

The federal and state governments decided on Wednesday to extend the partial shutdown that has been in effect since the beginning of November until December 20 and to tighten it. People are then only allowed to meet privately in groups of five and from two households. For the holidays, however, there should be a relaxation: Meetings “with the closest family or friends” are possible from December 23rd to January 1st with an upper limit of ten people plus children up to 14 years.

Berlin does not want to support this relaxation. A maximum of five people should still be allowed to meet there for private get-togethers over the holidays, with no specifications being made as to how many households they come from. The Senate is reacting to the particularly high incidence values ​​in Berlin.

Relaxation in Schleswig-Holstein, criticism from Bavaria

Schleswig-Holstein is also moving ahead with its own easing. In the state with its comparatively low number of infections, nail and cosmetic studios as well as massage parlors and animal parks can reopen from Monday. The seven-day incidence in Schleswig-Holstein was 47.6 new infections per 100,000 inhabitants on Thursday, according to the state government in the evening.

The individual courses are criticized from Bavaria: The Bavarian Prime Minister Markus Söder (CSU) said in the ARD “Extra” that he would find it better if all countries stayed on the same line. Söder also gave little hope that the federal and state governments will talk about easing the corona restrictions at a possible next meeting in mid-December. Since the partial shutdown began at the beginning of November, the number of infections has at best stagnated.

“I don’t think it’s about major easing,” said Söder. “Corona is actually a test of patience for all of us.”

What is still allowed on New Year’s Eve – coronavirus

Seven-day incidence below 100: These regions look forward to easing