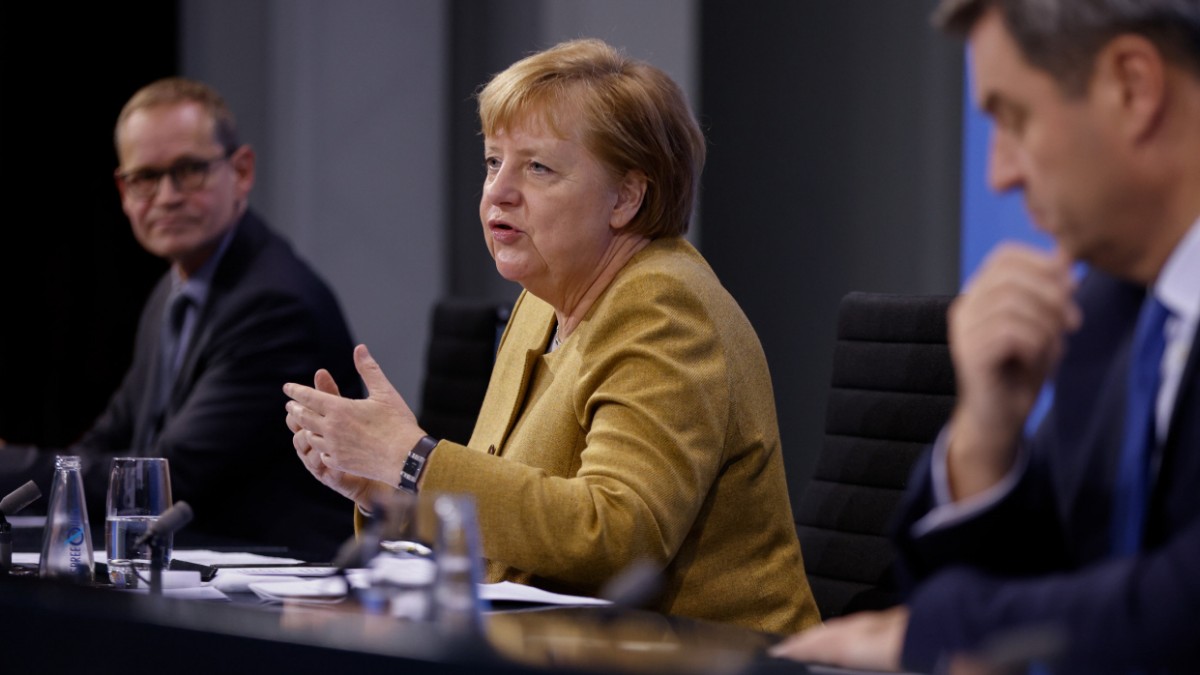 The prime ministers of the federal states had just agreed with Angela Merkel (CDU) on uniform corona rules for December last week, when some state chiefs left again. And that doesn’t go down well with the Chancellor. In a meeting of the CDU presidium, she clearly criticized it.

Berlin, Hesse, Mecklenburg-Western Pomerania, Lower Saxony, North Rhine-Westphalia and Schleswig-Holstein had announced that they would allow hotel stays for family visits over the festive period – contrary to a recommendation from the Chancellery.

In a virtual meeting of the CDU presidium on Monday, Merkel acknowledged the decision by the federal and state governments to relax the strict corona contact restrictions over the holidays, participants reported. She was quoted as saying that she lacked the imagination to suspect that particularly affected countries wanted to open hotels.

The Chancellor spoke of positive developments in the corona infection numbers in Hamburg and Bremen. In contrast, there are increasing numbers in Saxony, Thuringia and Brandenburg. Now regional efforts are necessary. Merkel emphasized that there were as many corona infections in November as there were from March to October combined – more than 500,000.

On Wednesday, the federal and state governments agreed that the partial lockdown with the closure of restaurants, theaters, fitness studios and leisure facilities should be extended until December 20. Private gatherings are limited to a maximum of five people. The contact restrictions will then be relaxed over Christmas to allow family visits.

No easing between the years in Baden-Württemberg

In Baden-Württemberg, the corona measures will be tightened again immediately after Christmas. The green-black state government only wants to relax the contact restrictions from December 23 to 27, a government spokesman confirmed to the German press agency on Monday. Prime Minister Winfried Kretschmann (Greens) agreed on this with his cabinet colleagues. Over the Christmas days, however, hotel stays for family visits in Baden-Württemberg are to be made possible.

The corona measures will be tightened nationwide in December – except during Christmas time. Last week, the federal and state governments agreed on an upper limit of ten people plus children up to 14 years of age for meetings “with the closest family or friends” from December 23 to January 1. This period was too long for Kretschmann. The state government wants to announce the new rules on Monday. According to the State Ministry, the new ordinance will come into force on Tuesday.

North Rhine-Westphalia’s Prime Minister Armin Laschet (CDU) calls for new concepts in the corona pandemic from January. “Society and the economy cannot survive another year like this,” Laschet said Rheinische Post. From the turn of the year, “smart concepts should enable long-term prospects for living with the pandemic,” he said. “With the vaccine approved, these concepts are realistic.”

Meanwhile, Chancellery Minister Helge Braun is optimistic about the coming year. “The pandemic will lose its horror in the next year,” said the CDU politician Handelsblatt. “As a society we have to stick to December and the months up to March by observing the AHA rules and reducing our contacts. Where that is not enough, cuts are inevitable. Then spring will come and hopefully the vaccine too.”

It has been possible to stop the exponential growth in the number of infections at a level that challenges the health system, but does not just overwhelm it. But 400 deaths a day are too many. “That’s why I would have liked to have made more far-reaching decisions in October.”

As expected, the health authorities reported comparatively few new corona infections to the Robert Koch Institute (RKI) on Monday morning. As the RKI announced on its website, 11 169 new cases were submitted within one day. The previous high was reached on Friday a week ago (November 20th) with 23,648 reported cases. Last Monday the number was 10,864. The numbers are comparatively low on Sundays and Mondays because, according to the RKI, fewer samples are taken on the weekend and therefore fewer tests are carried out overall.

The German health authorities also reported 125 new deaths within 24 hours. The trend in the number of daily deaths had recently increased, which was also expected after the steep increase in new infections. The total number of people who died with or with a proven infection with Sars-CoV-2 rose to a total of 16,248.

According to the RKI management report on Sunday, the so-called seven-day R-value was 0.95 (previous day: 0.96). This means that 100 infected people infect 95 more people. The value represents the occurrence of the infection eight to 16 days ago. If the value is below 1 for a longer period of time, the infection rate subsides.

The new restrictions to contain the corona pandemic have caused short-time working in Germany to rise again. The proportion of companies with short-time work rose in November from 24.8 percent in the previous month to 28.0 percent, the Munich-based Ifo Institute announced on Monday in Munich. The researchers refer to their own surveys.

In times of crisis, short-time work is a crucial instrument to prevent widespread layoffs of employees. According to Ifo, hotels (62.9 to 91 percent), restaurants (53.4 to 71.7 percent) and travel agencies and tour operators (from 88.0 to 91.1 percent) recorded particularly significant increases. “Especially in these sectors, which have been massively affected by the partial lockdown, a great deal of short-time work is being implemented again,” said Ifo labor market expert Sebastian Link. The researchers explained that the increase occurred through almost all major industries.

The plan for a national federal health reserve is becoming more concrete. After protective masks and other material were scarce in the spring, permanent reserves for one month are to be built up at 19 locations by the end of 2021. These should essentially consist of protective equipment, protective masks, ventilators and medication, explained Health Minister Jens Spahn (CDU) of the German Press Agency. According to this, the plan is that the reserve will be filled primarily with masks that have already been procured, then with material from domestic production. “In an emergency, we particularly support those who work in hospitals, nursing homes and medical practices. Good health care should not fail because of the material.”

At the beginning of June the federal government decided to establish a “National Health Protection Reserve” and commissioned the ministries involved with a concept. Specifically, the reserve should procure and store certain quantities, but also secure delivery options and production capacities. Such a combination should be able to cover the need for up to six months. In addition to supplying the health sector and the federal government, humanitarian aid with protective equipment should also be made possible for the World Health Organization (WHO) and other countries, according to the proposal.

47 Australian Open players in quarantine with no exit

Berlin plans a quota of migrants in the public sector

Unexpected baby: Nick Carter’s wife thought it was a tumor at first

Buy the Samsung Galaxy S21: 1 & 1 offers a UV box as an additional bonus

Siegfried & Roy: What will happen to your tigers after your death

The unrest remains after the election of Giffey: The Berlin SPD...

Schlager: Florian Silbereisen talks about Helene Fischer – by the way,...

How the new corona virus took hold in Germany 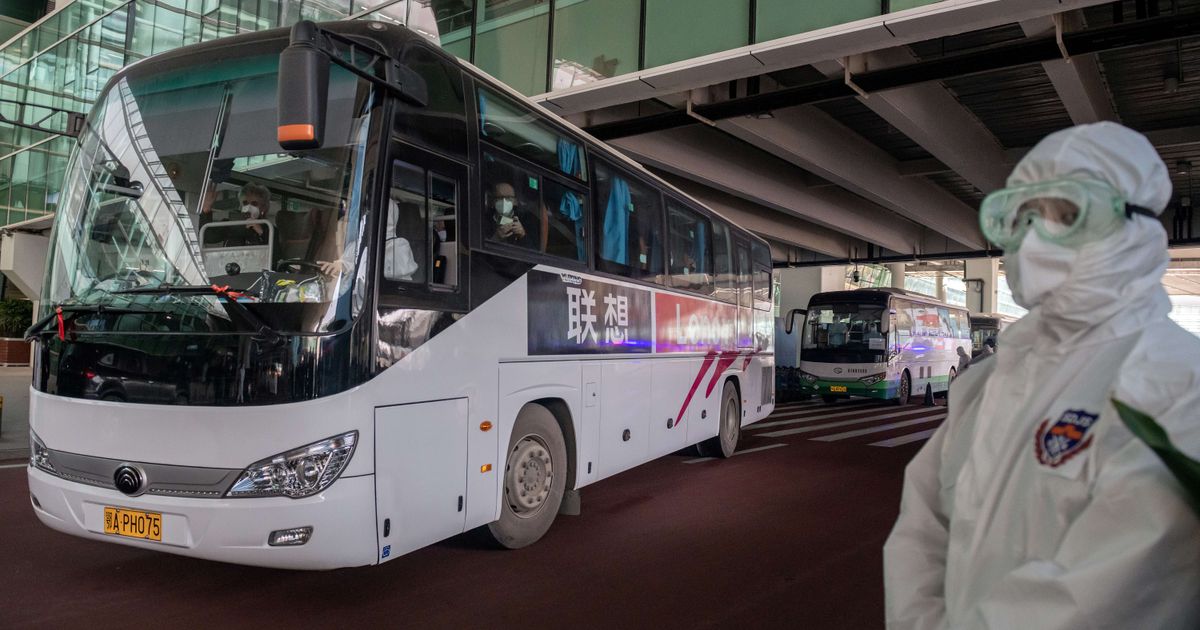