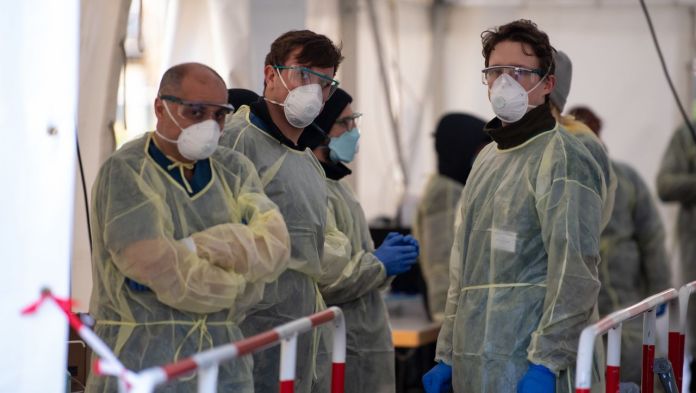 10.18 a.m .: Even before the extension of the shutdown was officially decided, there was a sum for possible further corona aid in December: 17 billion euros. With this, the federal government wants to increase its financial support again – in November, 15 billion euros have been planned as aid.

Incidence in the Hildburghausen district at 630

10.01 a.m .: In the Hildburghausen district of Thuringia – where numerous opponents of the corona measures recently protested without a face mask or distance – the incidence has continued to rise. It is now at 630 infections per 100,000 inhabitants within seven days. The district is the hardest hit in Germany. A tough lockdown has been in place since Wednesday.

First case of infection in the island state of Samoa

09:54 a.m .: The coronavirus has not yet arrived in some regions of the world. So far, this also included the Pacific archipelago Samoa – so far. Because now the island state is recording its first case of infection. It was brought in by a 70-year-old Samoan who had entered the country from Australia.

9.43 a.m .: Despite the shutdown in November, according to an Ifo survey, slightly more employers are considering new hires than in the previous month. The Ifo employment barometer rose from 96.4 points in October to 96.7 points, as the Munich research institute announced. The second wave will therefore not have any major negative effects on the German labor market for the time being.

09.13 a.m .: From January to September, 30,700 tons of fireworks worth 75.6 million euros were imported into Germany, three percent more than a year ago, according to the Federal Statistical Office. In order to avoid crowds of people and thus infection with the virus in the corona crisis, the federal and state governments have agreed to ban fireworks this year “in busy squares and streets”. Otherwise it was only “recommended to avoid the New Year’s Eve fireworks”.

In the first nine months of this year, as well as last year, almost all fireworks imported came from China. In 2019, the share of all imports was 97 percent. Chinese fireworks have consistently made up more than 90 percent of all imported fireworks over the past twenty years.
Germany exceeds one million corona infections
09.00 a.m: The total number of corona infections detected so far in Germany has exceeded the one million mark. The health authorities reported 22,806 new corona infections to the Robert Koch Institute (RKI) within 24 hours (as of November 27, 12:00 a.m.). The RKI announced on Friday morning that the number of cases that have become known since the beginning of the pandemic has risen to 1,006,394. On Friday a week ago, with 23,648 cases transmitted to the RKI, the highest level of daily new infections was last reached.

However, the number of new infections is only partially comparable with that of the previous weeks, as the RKI, among other things, has adjusted the recommendations for corona tests as to who should still be tested. The step was necessary as more and more laboratories were reaching their limits. But the decision could not only affect the number of new infections but also the proportion of positive tests. Read more here.

The number of deaths related to the virus rose 426 as of Friday to a total of 15,586. This is a high since the pandemic began. On Wednesday, 410 cases were recently set, a record in this area. The RKI estimates that around 696,100 people have now recovered.

On Thursday evening, the data from the University of Johns Hopkins University in Baltimore had already shown that the million threshold for corona infections found in Germany was exceeded. The researchers’ data are updated regularly and therefore often show a higher level than official figures from the World Health Organization (WHO) or the countries concerned. In some cases, however, the figures were corrected afterwards.

According to the RKI management report on Thursday evening, the so-called seven-day R-value was 0.90 (previous day: 0.87). This means that 100 infected people infect 90 more people. The value represents the occurrence of the infection 8 to 16 days ago. If the value is below 1 for a longer period of time, the infection rate subsides.

8:38 am: In Germany, significantly fewer new companies were founded during the Corona crisis. From January to September, the number of new companies founded, whose legal form and number of employees indicated greater economic importance, fell to 88,200. That was 6.4 percent less than in the same period of the previous year, said the Federal Statistical Office.

The Wiesbaden authority cited the cessation of visitor traffic in the pandemic and staff shortages in the trade offices as reasons. But the general economic uncertainty also made people shy away from the leap into self-employment.

The number of newly founded small businesses collapsed from January to September by 18.5 percent to 104,100. In contrast, more part-time businesses were founded (plus 5.5 percent to around 216,900).

The number of business registrations fell in the first three quarters to around 496,200 – 4.5 percent less than in the same period of the previous year. In addition to the establishment of new companies, this also includes takeovers, for example through purchase or entry into shareholders, as well as conversions and immigration from other registration areas. At the same time, there were significantly fewer complete commercial tasks. The limited ability of the trade offices to work is also a major reason for this, it said.

07:59 a.m .: The two Russian biathletes Anton Babikow, 29, and Evgeni Garanitschew, 32, missed the season opener this weekend in Kontiolahti, Finland, due to corona quarantine. As the Russian association RBU announced, only the two athletes are affected.

There had previously been four positive test results in the vicinity of the Russians. As a result, the entire team was temporarily isolated. Among those who tested positive is Babikow, an ex-world champion and current high performer. In addition, two doctors and a masseur tested positive for the virus.

Meanwhile, due to positive corona tests in the team, the entire Slovak team missed the start with the two individual races on Saturday and the sprints on Sunday. There were also positive results from team members from Latvia, Moldova, France and Romania. According to a decision by the Finnish health authority, the French team does not have to be in quarantine, as the world association IBU announced.

05:52 a.m .: Singer Kylie Minogue is homesick. The Australian, who lives in the British capital London, is particularly missing her relatives in times of Corona. “I feel so far away from my family in Australia,” Minogue told the German Press Agency. “I’m so grateful when I can finally go back there.”

05.32 a.m .: At Christmas, people should avoid being caressed, according to UK government medical advisor Chris Whitty. “It’s not forbidden” – but that doesn’t mean you should, Whitty said on Thursday evening in London. Seniors in particular must be protected from being infected with the corona virus.

Similar to Germany, people in Great Britain should be able to celebrate Christmas together across the country despite Corona. Over the holidays, three households will therefore be allowed to form a “Christmas Bubble” and meet each other. In the past two weeks, the UK had around 450 infections per 100,000 people, according to the EU epidemic agency ECDC. The country has around 68 million inhabitants

District administrator of Hildburghausen under police protection after threat

05.22 a.m .: The district administrator of the nationwide corona hotspot district Hildburghausen, Thomas Müller, has been under police protection since Thursday. He had previously been insulted and threatened on social media and reported a complaint, said a police spokesman in Erfurt. Read more here.

Lots of mask violations on trains and at stations

4:05 a.m .: According to a report by the Funke media group, there are massive violations of corona infection protection in the trains and stations. In just two months, the federal police warned 145,000 people because they either wore the mouth-nose protection incorrectly or not at all. In most cases, the travelers would have responded to the speech. In contrast, in almost 2,500 cases, those addressed showed themselves to be unreasonable and continued to violate the mask requirement. Here the police switched on the responsible health department “to punish possible administrative offense proceedings”.

Too few freezers for corona vaccine

3:50 am: Eva van Pelt, head of the Hamburg laboratory technology manufacturer Eppendorf, criticizes the federal government: There is an urgent need for a plan as to how the vaccine can be cooled, stored and transported. Read more here.

03:29 am: Japan’s Emperor Naruhito and his family will forego their traditional New Year’s appearance in front of the people because of the rising number of corona infections. As the Haushofamt announced, this decision is intended to prevent the virus from spreading.

It is the first time since 1990 that the monarch’s New Year’s appearance on his balcony is canceled. At that time, the mourning for the death of Emperor Hirohito, the grandfather of today’s Tenno, was the reason.

At the performance, which usually takes place on January 2nd, the emperor and members of his family greet tens of thousands of subjects for the New Year behind glass in the Chowa Den Palace. It is one of the rare opportunities for the people to get this close to the palace.

1.55 a.m .: The Federal Ministry of Health wants to secure 60 million rapid tests for the months from January to March, as reported by the “Rheinische Post”, citing a ministry spokesman. Accordingly, it should be 40 million for the three months thereafter and 30 million monthly from the middle of the year up to and including December 2021. These rapid tests are to be delivered primarily to the health and care sector, as the newspaper reports.

Model for a life with the coronavirus

0.35 a.m .: Sars-CoV-2 will not go away anytime soon, experts agree. But how will we deal with the pandemic in the coming months? Researchers have calculated two options. Read more here.

DeepFake Hack at ?? The Mandalorian ?? more realistic than...

Breakthrough with a new instrument – astronomers get a detailed look...

Allianz is getting through the crisis well

And criticizes Trump: So Melania says goodbye as first lady

Sanofi buys British Kymab for over a billion dollars initially –...