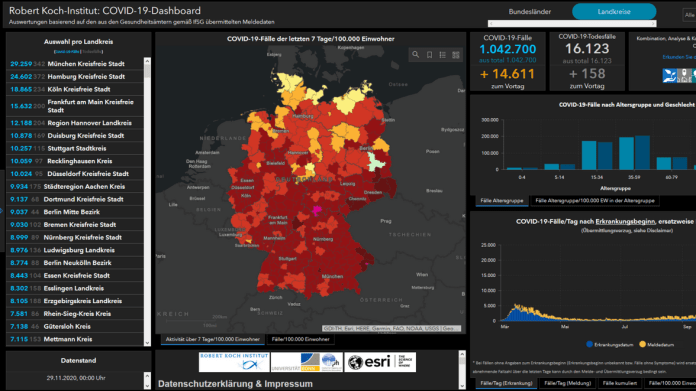 The Robert Koch Institute (RKI) continuously records the current corona situation in Germany, evaluates according to its own information on the homepage “all information and estimates the risk for the population in Germany”. In addition, the RKI provides recommendations for the specialist public, such as case numbers and information on general infection control measures, diagnostics and test strategies and prevention in health facilities.

RKI figures for Germany in the dashboard

Anyone who is interested in the number of infections in their immediate vicinity – i.e. in their state or in their district – beyond the nationwide figures will find current data every day in the RKI’s dashboard.

Important indicators of the corona pandemic in Germany

Since the beginning of the pandemic, numbers have been published every day to trace the course. Here is an explanation of what numbers mean what.

The reproduction number – or R-value for short – describes how many people an infected person infects during their illness. If the number is above one, a disease is spreading more and more in the population. The further it moves away from one, the faster and more threatening the trend is. However, this is always only a general national assessment of the situation.

The R-value alone does not necessarily say anything about the drama of the entire development. It only results from the combination with the number of daily or weekly new infections. The reason is simple: with the same R value, it makes a huge difference whether there are 50,000 infections a day or a few hundred. Theoretically, the dynamic of spread is the same, but in the case of the higher numbers, it puts a greater burden on the capacities of the health systems due to the sheer mass alone.

In Germany, the number of new infections every day is now between 12,000 and 23,000 cases. That is an extreme increase in a relatively short time. At the beginning of October, according to the RKI, the number of new cases reported every day was only between 1,000 and 4,000. In other European countries the development is even more dramatic.

The so-called seven-day incidence is a key benchmark for assessing the infection dynamics in a specific area and deciding on countermeasures. In Germany, it is recorded at community or district level and expresses how many new infections per 100,000 inhabitants have been registered in the past seven days. Nationwide it is now 139.

Behind this, however, there are regionally different trends. An incidence value of 50 was introduced in Germany as an essential threshold for the introduction of stricter containment measures, but this has now been clearly exceeded almost everywhere.

Ultimately, the number of cases alone does not determine how well a country can cope with the pandemic. Rather, it is of decisive importance whether the health system has sufficient capacity to treat the sick. That is why experts and politicians are observing very closely how the number of severe courses and available treatment places are developing.

The number is an important yardstick when deciding on containment measures for another reason: There is no unreported number. In contrast to the number of reports on infections, which are also influenced by test strategies, there is no “underreporting” of artificially ventilated intensive care patients in hospitals. However, there is a time delay of two weeks. This is how long it takes after an infection for severe disease to develop. The number of intensive care patients lags behind the infection dynamics.

No more curfew at night? Dresden wants to loosen restrictions

Trump camp wants to continue to appeal before the Supreme Court...

50 years ago: The patent for LCD is applied for

That’s how effective the Moderna vaccine is

Tourist boom in Dubai: Emirates airline has all employees vaccinated