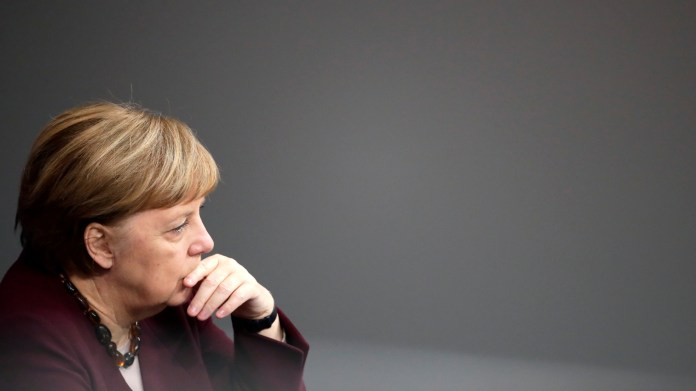 It’s about solidarity and strategy, about small and small and high hopes: Once again this autumn, Chancellor Merkel will explain new corona measures in the Bundestag. Not everyone is convinced.

What big news should she say? That easing is not justifiable yet, that contacts must continue to be restricted, that at Christmas it is also a matter of individual responsibility, that the restrictions will probably still apply in January, but that vaccines give hope – so far, so clear.

Angela Merkel still looks a bit drained this morning, at least at the beginning of her speech. Seven and a half hours of arduous negotiations with the Prime Ministers are behind her, and the press conference later in the evening she concluded with: “See you tomorrow morning in the Bundestag.”

It is a government declaration in the truest sense of the word: Merkel explains the resolutions of the Bund-Länder-Round, a “Kungel round in the virtual back room”, as AfD parliamentary group leader Alice Weidel will later criticize. The Chancellor defends the agreed contact restrictions, the planned temporary easing over the holidays, the additional requirements for retailers.

Now it is no secret that Merkel wanted more in the negotiations with the countries. She had already wanted to enforce stricter requirements in mid-November – and she is also not convinced that yesterday’s measures will be sufficient to significantly reduce the number of infections. She is not the only one in the Bundestag today who has doubts, as the later debate will show.

Merkel shows her dissatisfaction only once in her 20-minute speech: on the subject of schools. She knows that the federal states are responsible for school policy. “But we also have a responsibility for the overall infection process,” she emphasizes for the federal government. Merkel and the head of the Chancellery, Helge Braun, had repeatedly made it clear in their consultations with the Prime Minister that they considered the requirements in schools to be insufficient. However, the federal states had resisted binding requirements.

“That wears us all down”

In the area of ​​schools there is “still potential”, later Union parliamentary group leader Ralph Brinkhaus notes. His criticism is more fundamental. He wanted more consistent measures, such as a more uniform strategy for hotspots with high numbers of infections. “This bit by bit of ‘always one-on-one’ wears us down,” he says. And one more swipe: “Leading in a crisis also means asking people to do something.”

All of this is far too little, says Green Party leader Anton Hofreiter. He is “rather careful whether the measures are sufficient”. The fact that the resolutions only lasted until the beginning of January is driving on sight. It is “far too little planning and foresight”. He misses a longer-term strategy.

The word strategy comes up more often in this debate. Probably because it causes phantom pain for many MPs. In her opinion, there is no convincing strategy by the federal and state governments in the fight against this pandemic, which Merkel once again describes as the “greatest challenge since World War II”. A strategy for schools, hotspots, for the economy, for risk groups, for the longed-for vaccinations.

The constant extension and expansion of the restrictions is “not a long-term sustainable strategy,” notes FDP boss Christian Lindner. Once again he calls for the focus to be placed on risk groups. He speaks of a “protective screen” for these people. This is time-consuming and expensive because it concerns a large population group. But it is justified and would allow more social life again in certain areas.

Merkel sees it differently. It is “ethically not justifiable” to isolate 27 million people. Nobody should pretend that such a number of people can be protected by keeping them out of the public domain: “That won’t work and I don’t think that’s ethically justifiable either.” However, the federal and state governments agreed that risk groups should be provided with cheap FFP2 masks and rapid tests.

Left parliamentary group leader Dietmar Barsch reminds Merkel of her own statement that a medium-term concept is needed against the corona crisis. To this day it is not available. “Every theater has prepared better for the Corona winter than the federal government,” he criticizes. Whether in schools, on trains, nursing homes or hospitals – the federal government has done far too little in the past eight months.

If not a convincing long-term strategy, then at least the principle of hope. Merkel also implores it in her speech: vaccines would not solve the problem immediately, but they are “a light at the end of the tunnel”. She even thinks it possible that it could exist before Christmas. If so, they would be offered to those in the medical and nursing fields.

And something else gives her hope: that the vast majority of people will adhere to the agreed restrictions. It is also the moment – towards the end of her speech – when Merkel leaves the government declaration mode. “We are not powerless,” she says. Yes, the next few months would be difficult. But if “we stand up for one another and for one another more than ever, we will come out of the crisis”. So solidarity – also a word that comes up often in the debate.

The flash that nobody wanted: Audi duo, first hybrid on the...

Consumer prices in the euro area also fall in December |...

New corona virus at the school – City of Zurich sends...

Bares for Rares: This has never happened before! The candidate...

Buy PS5: That’s what Euronics says about the delivery situation and...

PlayStation Now in January 2021: The Crew 2, Frostpunk and more

Cyberpunk 2077: These are the times for pre-load and game start