There are two corona cases in the Swedish royal family: Carl Philip and Sofia. The two had contact with the king and crown princess couple. Their test results are now available.

After the Swedish palace officially announced on Monday that Prince Carl Philip and his wife Princess Sofia were infected with the corona virus, King Carl Gustaf and Queen Silvia as well as Crown Princess Victoria and Prince Daniel were also tested. Because the couple were together last Friday at the funeral of Walther Sommerlath, the queen’s brother. But now it is clear that the four royals are not infected.

Even before the funeral, the whole family had been tested – all negative. The funeral service then took place in strict compliance with the safety and hygiene rules. “After the confirmation of an illness of the prince couple On Wednesday, November 25th, the royal couple and the crown princess couple were tested again and confirmed as healthy, “says an official message from the Swedish royal family, the” Kungahuset “. The royals can breathe a sigh of relief: both the 74-year-old monarch His wife, who is two years older than him, also belongs to the risk group, as does Prince Daniel, who, 47, had a kidney transplant in 2009 due to an illness.

However, it is still unclear where exactly Carl Philip and Sofia were infected. The investigations for the follow-up have already been initiated under the supervision of the royal family’s personal doctor, it said on Thursday. The couple is in quarantine at home with their two sons Alexander and Gabriel. The 41-year-old and the 35-year-old are doing well under the circumstances.

Corona summit in the Chancellery: the most absurd Merkel paper of...

Interactive map shows the vaccination rates of the federal states 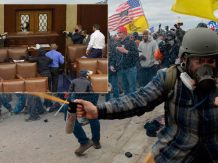