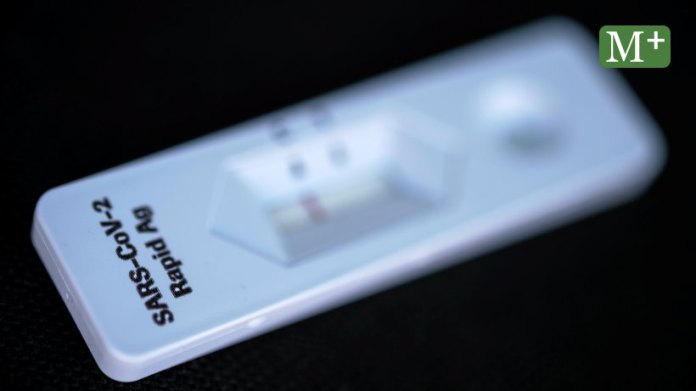 Berlin. Teachers and other service staff at Berlin schools should be able to test themselves for Corona in the future. How these self-tests should be implemented is currently being examined in cooperation with the health administration and the Berlin Charité, the Senate Department for Education announced on Tuesday at the request of the Berliner Morgenpost. “The aim of the Senate Administration is not just to test teachers, but all service staff at schools. About 40,000 tests are required per week for this, ”said a spokesman for Education Senator Sandra Scheeres (SPD).

The health ministers of the federal states basically cleared the way for self-rapid tests in schools on Tuesday. The model for this is a study that is currently being carried out in schools in Hessen. The self-testing of teachers with rapid antigen tests is tried out. This is to prevent infected but symptom-free teachers from entering schools and infecting other people.

The Federal Ministry of Health should now quickly create the legal basis for self-tests to be carried out by appropriately trained teachers, according to the resolution proposed by the Conference of Health Ministers. When that happens, Berlin will also be interested in the rapid tests being used in schools, said the spokesman for the education administration. “Self-tests can be another component in the extensive measures to contain SARS-CoV-2 and to prevent infections from entering schools,” he said.

The Education and Science Union (GEW) Berlin warned on Tuesday in a letter to the Governing Mayor Michael Müller (SPD) of the growing risk of infection for educators and children with the corona virus. “We called on Mr. Müller to make health protection in schools and day-care centers a top priority and to reduce the size of the learning groups,” said GEW spokesman Markus Hanisch. Many educators and teachers rated their risk of infection as very high, but felt that their health at work was not adequately protected, according to the letter.

The GEW also called for transparent decisions on infection protection. School administrators are often left alone and presented with a fait accompli by the health authorities. Fixed incidence values, a halving of the number of learning groups and a change from face-to-face and distance teaching are necessary.

Before the next round of consultations with the Prime Minister and Chancellor Angela Merkel (CDU) on Wednesday, the Governing Mayor Müller emphasized that there could be no requirements at the federal level as to which teaching model would be implemented. “That cannot be a route that is agreed across the country,” he said. Sticking to face-to-face teaching is important to the countries, also for social reasons. “We want the children to come to school and not be left to their own devices at home, knowing full well that not all parents can support the way it should be,” said Müller. Müller takes a critical view of a teaching model in which sometimes one and sometimes the other children are taught alternately.

Before the video conference with the Chancellor, the Prime Ministers also spoke out in favor of prohibiting New Year’s Eve fireworks in busy public places and streets in order to avoid larger groups. However, there should not be a general ban on firecrackers. The Berlin interior administration announced that on New Year’s Eve, as in the previous year, there will again be several firecracking zones. Which and how many these are is still open.

The prime ministers are also pushing for the Christmas contact restrictions to be relaxed. From December 23 to January 1, meetings of a household with non-household family members or people outside the household should be made possible up to a maximum of ten people. This should allow “celebrations with family and friends, albeit on a smaller scale”.

Meanwhile, it was reported on Tuesday that 36 more people had died as a result of coronavirus infection – the highest figure since the pandemic began.

The great fuss about the allegedly highly dangerous Corona mutant