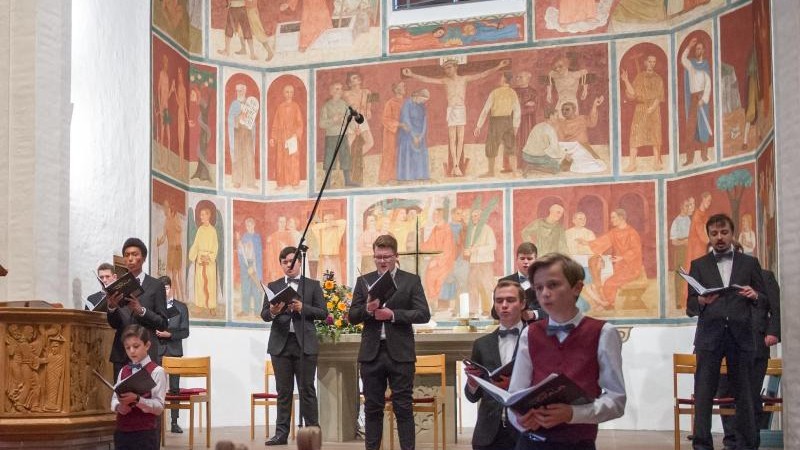 Reutlingen / Stuttgart (dpa / lsw) – No more performances, no youngsters for singing together, existential worries: The corona pandemic does not stop at the boys’ choirs in the southwest either. The canceled concerts tear deep holes in some of the coffers of the choral societies and choirs, and there are also concerns about new members. The problem affects almost all of the 20 or so boys ‘choirs in Baden-Württemberg, says Christian J. Bonath from the boys’ choir “Capella Vocalis” in Reutlingen. Just a few days ago, numerous boys’ choirs from Germany, Austria and Switzerland used flash mobs and video clips on social media to recruit new talent. The more difficult recruitment of young singers also calls into question the existence of some ensembles.

The cancellation of numerous concerts also causes frustration. “About 90 percent of the concerts planned by our choir have so far been canceled this year,” says Bonath. He puts the losses at 40,000 euros. When looking at the annual budget of around 200,000 euros for the choir, which is funded by the state and city of Reutlingen, it becomes clear how big the gap is already. It is unclear whether Christmas concerts will be possible. Choir singers are hard hit with rejections, especially since they rehearse demanding pieces like the St. John Passion for months, says the choir director.

Rainer Johannes Homburg, the director of the Stuttgart Hymn Choirboys, sees it that way too. In his opinion, everyday life in Corona times can also influence the structure of a choir. In order to be able to keep the distance, instead of two hours with 40 boys, the choirboys now rehearse one hour twice a week with 20 boys each time. So the repertoire remains manageable.

If concerts take place at all this year, then usually with a limited number of participants in order to be able to comply with the rules of distance. Instead of 60 or even 80 boys, there would then be just a dozen choirboys – therefore the most powerful singers. This in turn leads to the formation of elites. It is important that all boys experience the choir as a functioning community, says Homburg. If the concert is also missing as a major goal, the pleasure in rehearsing is lost.

The ecumenical boys’ choir “Collegium Iuvenum” in Stuttgart is also thinking about this. It is true that the reliable planning of performances is extremely difficult and even almost impossible under the current conditions. Still rehearsing. A joint rehearsal without gaps in larger groups can, however, “be replaced by no imagination and effort that is currently invested in Corona-compliant choir work,” emphasizes choir spokeswoman Anja Kalischke-Bäuerle. A fine sonic work, which is characterized by listening to and reacting to one another and thus ensures musical progress, is made very difficult by the large distances between the singers.

“Due to the protection against infection, we are currently not able to advertise our choirs in schools as usual,” says the Reutlingen choir director Bonath. This is problematic because boys, for example, can usually only sing the soprano voice between the ages of 10 and 14. If choirs recruited fewer boys in this age group, an important vocal element would be missing in the long term.

In the battle for the next generation, a concept for online new admissions is currently being developed in Stuttgart. For example, they have had good experiences with online voice training, says Kalischke-Bäuerle. “In a few online auditions that we have had so far, it was easy to determine whether a voice is healthy and whether basic musical knowledge is already available.” The number of visitors that the boys’ choir “Collegium Iuvenum” had before Corona had almost dried up.

Call from Ronaldo: Reinier before loan termination at BVB?

Has the Corona crisis increased the inequalities between the sexes?