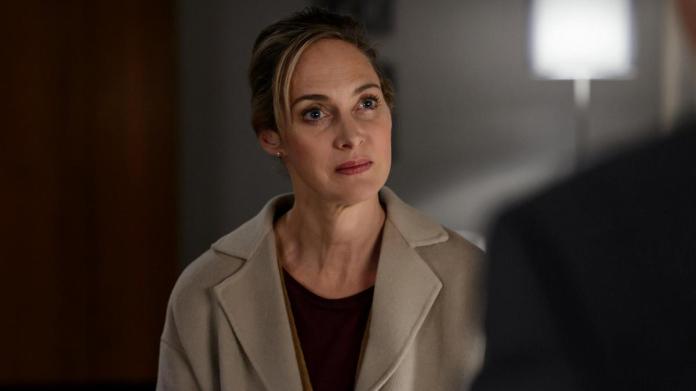 Dhe spaces for discourse are becoming increasingly narrow. Now, before we get ourselves wrong, this is not meant politically. But spatial. And a TV balance sheet of the past few weeks.

Almost visionary for times when going out and having limited contact, socially relevant debates are now taking place in the hall. And then the international law suit against the Federal Republic of Germany for neglecting climate protection measures is negotiated (in Andres Veiel’s “Ökozid”) or the question of whether a person may be master of his own death (in Ferdinand von Schirach’s “God”) before a fictitious ethics council.

Daniel Kehlmannn’s “The Interrogation in the Night” pulls the debate room screw a little closer into the Kafkaesque. The outside world no longer takes place. There is no place. A piece for two actors and a watch was supposed to be “Christmas Eve”, the template for the film that Matti Geschonneck has now shot with Sophie von Kessel and Charly Hübner for ZDF.

The chamber duel premiered almost four years ago in Vienna. The people are a philosophy professor and a state security guard. The clock is ticking down the hour and a half that the policeman has to find out from the left-wing extremist expert on political philosophy and structural violence when the bomb she presumably, maybe, possibly built with her ex-husband will go off.

“The oppressed of this earth”

A letter of confession was found on her laptop, which she claims was never online. A letter that served as the basis for her seminar, she says, was an introduction to political theory. The elegant woman from a wealthy family completed her habilitation through Frantz Fanon, his book “The Oppressed of the Earth” and “The Concept of Revolutionary Violence”.

So far, the reading drama has taken place in suggestive dictatorial rooms, in interrogation rooms, in clinical surroundings. The professor whose name is Judith, which means nothing, was not always doing well on stage when she first met the civil servant whose name is Thomas, which also means nothing. Sometimes she sat there tied up and tortured.

Matti Geschonneck and Kehlmann, who wrote the script himself, leave the clock off and make themselves comfortable with their two debating duel in the suite of a four-star hotel. Both are somehow appropriate to the rather cozy piece and the placement of its original program in the Christmas season, but overall it is not good for the “interrogation”.

The time pressure is – like the whole bombing story, based on everything – now finally a mere dramaturgical assertion. And the warm light of the suite covers the dialogues like mildew.

Nothing really happens. Sophie von Kessel, who has been carefully made up for every possible danger, takes off her coat after an hour. Charly Hübner, whose passive aggressiveness is only moderately kept in shape by his badly fitting suit, raises his voice every now and then.

It’s about gestures, minimal changes in facial expressions, reflections, looks. Nothing should distract from what is actually going on here. A sword fight of the retrodichtomies.

There are: supervised against supervisors, bourgeoisie against proletariat, idealist against realist, rich against poor, left-liberal against right-liberal, revolutionary violence against structural violence, freedom against security.

Everything, however, in finely tuned language, well padded in a kind of discursive wellness atmosphere, as subtly threatening as the barely noticeable music. You poke a little bit into the personal. Every now and then angels of almost physical approach walk across the room. You stay a stranger. No bomb goes off anywhere.

Kehlmann keeps out of the game, disappears behind the hills of his own argumentation much more than Ferdinand von Schirach does in his. He didn’t want to cancel out the opposites, but let them collide as neutrally as possible. He said. Intellectually, it should be at eye level. Which is why the professor’s worldview has to be the way it is in 1975.

The right has no moral legitimacy

For Kehlmann, both the religious fanatics as opponents of state power and the enemies of the state from the right failed. Kehlmann did not find jihadists interesting because “normally they are not very intelligent people. Fanaticism means that you turn off part of your intelligence ”.

It was the same with his right hand. For his salon terrorist, he needed a figure whose revolutionary mechanics were driven by morality to the same extent as those of their counterpart. But he probably did not want to allow the right-wing morality.

It’s a shame actually. An intellectually upgraded Beate Zschäpe would have been something different on German television. That would have been uncomfortable for the state security.

They actually exist, the characters. Not dealing with them, not taking them seriously as participants in the dramatic discourse, could turn out to be negligent laziness.

Because of the 17-euro drink: Violent criticism of Duchess Meghan

Sibel Kekilli and Kostja Ullmann get involved in experiments

Harry and Meghan rule out a return to the royal family

Christian Lindner: “We are not sufficiently prepared for the vaccination”