“Darth Vader” actor David Prowse is after a short illness deceased. According to “The Mirror”, this was confirmed by the British actor’s agent. Prowse was 85 years old.

He played that “Star Wars” villain Darth Vader in the original Star Wars trilogy. However, Darth Vader’s famous voice did not come from him, but from the actor James Earl Jones.

“Darth Vader” actor David Prowse: “May the force be with him”

David Prowse was born in Bristol, UK. He supposedly got the role as “Darth Vader” mainly because of his height – he is about two meters tall – and his experience as a Weightlifter. His agent’s statement reads, “May the Force be with him, always. Although he was famous for playing many monsters, he was a hero in our lives to me and everyone who knew and worked with Dave. “

In addition to “Star Wars”, “The Empire Strikes Back” and “The Return of the Jedi Knights”, Prowse was also in “Clockwork Orange”, “Frankenstein’s horror”, “Circus der Vampire” and “Doctor Who” to see. He also worked as a fitness trainer.

Also read: “Star Wars” offshoot with Obi-Wan Kenobi will be a mini-series
© 1&1 Mail & Media/spot on news

Last year, The Rise of Skywalker, the latest “Star Wars” film series came to an end. Under the auspices of Disney, the heroes around Rey, Finn and Poe have had great adventures – but what is next for their actors? 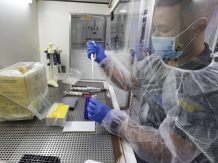 Philips 70-inch television and Ambilight for Black Friday at Otto at...

Return to schools postponed to January 25th, with shift work –...

Corona: 5 things that were important this weekend

According to German information: EU wants to start vaccinating from December...