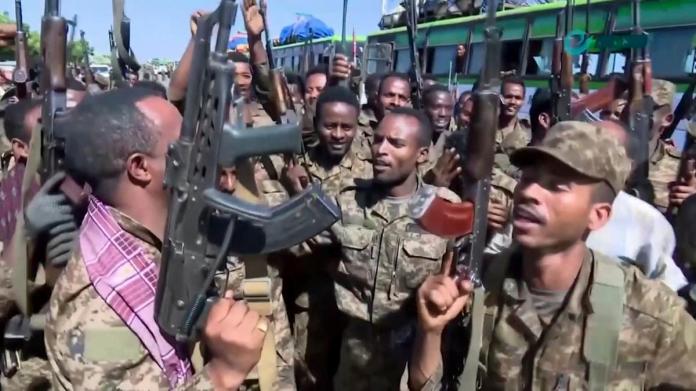 Dhe word “war” continues to prevent Ethiopia’s eloquent Prime Minister Abiy Ahmed with a view to the civil war in the north of his country. Rather, it is an “operation to restore constitutional order” to protect the rule of law. The 2019 Nobel Peace Prize laureate may turn it around as he likes – the conflict in the Tigray region, as the British newspaper “The Guardian” aptly stated, is “a war under any recognizable definition”.

The violence has escalated too much since the beginning of November. There are now enough credible reports to suggest hundreds of deaths, often as a result of ethnically motivated violence. Tens of thousands of refugees were displaced in connection with the fighting between the Ethiopian army and militias affiliated with the insurgent, once nationally influential party, the Tigray People’s Liberation Front (TPLF).

Many civilians are seeking protection in neighboring Sudan, which is still reorganizing itself after the revolution last year. In the past few days, Ethiopian troops blocked the access roads towards Sudan, which caused the flow of refugees to ebb and for those blocked it must feel like a trap has been snapped shut.

Ethiopia, a country with a population of 110 million and one of the most important nations in Africa as the location of the African Union (AU), reacted with a snub: “We reject any interference in our internal affairs,” replied Prime Minister Abiy’s office gruffly towards the EU, with which there is important economic and development cooperation.

Of course, there can be no doubt about the accuracy of Mekonnen’s analysis. In addition to the refugee crisis in Sudan, this mainly affects Eritrea, where rockets from Tigray forces landed. But effects can also be felt in the most unstable countries on the continent: Ethiopia’s army in Somalia actually takes part in the fight against the Islamist terrorist group al-Shabab.

Most recently, however, hundreds of their own soldiers were disarmed there – namely those of Tigrayan descent. Numerous ethnically acceptable fighters were withdrawn by the government and sent to the front in Tigray. Soldiers have also been ordered back from the peacekeeping mission in South Sudan. It was said to have been too close to the TPLF.

Numerous police officers with roots in Tigray have been released from duty in Ethiopia. Their people make up six percent of the population, many live in the capital Addis. Many workers from Tigray are currently being laid off from civilian jobs for flimsy reasons.

In the past decade, the hope of a continental signaling effect has probably not been linked with any other African country as much as with Ethiopia. In the G20 initiative “Compacts with Africa” launched by Germany in 2017, Ethiopia is naturally one of “twelve reform-oriented states”, the aim is to improve the conditions for private investments. Celebrated as a reformer, Abiy stood for it like no other politician on the continent. It showed impressive growth rates, reduced poverty and established factories at a remarkable pace, and even seemed to open up civil society.

Little of that can be felt these days. The Internet and other communication channels in Tigray have been shut down for weeks, international journalists are almost exclusively only allowed to move within Addis Ababa, and often no visa is issued at all. William Davison, one of the few independent analysts permanently residing in Ethiopia as a representative of the renowned think tank “Crisis Group”, was deported a few days ago – he was initially told without any formal reason that he had to leave the country “immediately”. The government later announced that his work permit had been revoked for alleged violations of labor law. The “Crisis Group” announced that there was “little doubt” that the deportation was rather based on the “increasing sensitivity of the authorities to views that deviate from their own line”.

It is to be feared that Ethiopia’s role as a bearer of hope has failed in many ways. As rapidly as the dynamic Abiy pushed the peace agreement with Eritrea forward, the central elements were withdrawn again quickly. Many of the released political prisoners were arrested again. And that independent reporting remains a challenge in Ethiopia even in peacetime was foreseen a year ago when Abiy did not give a single interview when the Nobel Peace Prize was awarded. He wanted to prevent unpleasant questions about the bloody unrest that was still prevalent at that time with the Oromo ethnic group. Even the hoped-for liberalization and de-bureaucratisation of the economy fell far short of expectations.

Above all, however, the conflict reveals that pronounced federalism based on ethnic lines is not necessarily the hoped-for model path for lasting peace in multiethnic states such as Ethiopia. This is also bad news for the Congo and Nigeria, where some researchers and politicians saw this as a possible approach for a more stable peace in crisis regions.

There is no longer any talk of that in northern Ethiopia. Long before the conflict in Tigray, Abiy had tried to secure more power over the individual regions for his central government. On Thursday he announced that he had ordered a “final military offensive” on the provincial capital Mekelle after an ultimatum to the TPLF leadership had expired. “The last peaceful gate” closed, he wrote on Twitter.

One would like to point out that war can hardly be described more clearly.

Hours to Execution: Montgomery can only save Trump’s grace

On the death of Martin Runge: passionate champion for good geriatrics...