For investors in the biotech company CureVac, things got exciting at the start of the week: the group opened its books for the first time since going public in September.

The Tübingen group CureVac has presented its figures for the third quarter and the first nine months of the current financial year.

CureVac shares temporarily gain 6.97 percent to 91.99 US dollars in pre-market trading on NASDAQ.

EU has been waiting for millions of Pfizer doses for months 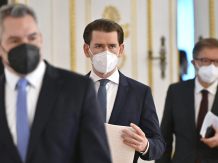 65 years of recruitment agreement with Italy: guest workers who stay

All episodes at once on Amazon Prime