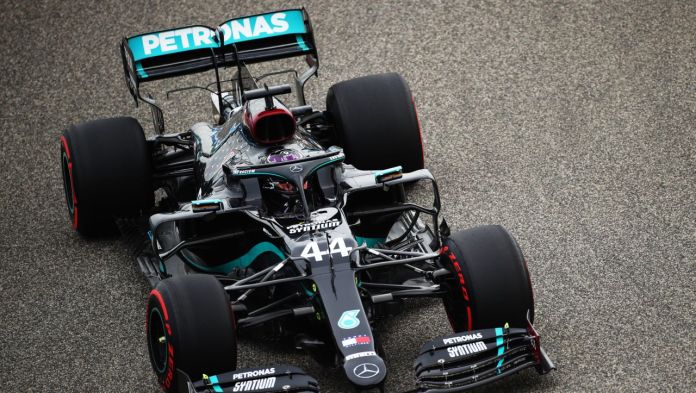 Mercedes team boss Toto Wolff said before qualifying in Bahrain that Red Bull is currently the stronger team. The training impressions confirmed that, Max Verstappen had made the best impression. In the battle for the starting positions, it was world champion Lewis Hamilton who played with the competition and set by far the best lap on the asphalt with a time of 1: 27.264.
Hamilton is starting from first place in the Bahrain Grand Prix. The Briton, who can set the record of 13 wins this season, relegated his Finnish teammates Valtteri Bottas and Verstappen to the places in qualifying for the 15th race of the season on Sunday (3.10 p.m., live ticker SPIEGEL.de; TV: RTL, Sky). For Hamilton it was the 98th pole of his Formula 1 career and the tenth of the season. “Mercedes improved today,” said Verstappen. “It will be difficult to beat them.” The question arises, however, as to whether Mercedes had shown everything in practice.
»I didn’t celebrate after winning the World Cup. I trained, focused fully on this race, ”said Hamilton. “This is the continuation of the previous performance. I just wanted to have fun today. When the pressure drops, that’s something to ease. ”
The two Ferrari drivers missed the last qualifying segment and started the race from positions eleven and twelve. Sebastian Vettel proved his slight upward trend despite the poor overall result, he was faster than his team mate Charles Leclerc.

Ferrari and Renault are moving towards Red Bull

An important decision for the future was prepared on the sidelines of the third last race of the year. Since engine partner Honda announced its exit from Formula 1 for the end of the 2021 season weeks ago, the world’s most important racing series was threatened with the exit of Red Bull and Alpha Tauri and thus a reduction in the field by two teams. This scenario now seems off the table.

Since Red Bull will have to compete without an engine partner from 2022 and want to take over the drive from Honda, the team from Verstappen called for a development stop until new regulations take effect. That should happen in 2026 and could attract other manufacturers – for example VW. So far Ferrari and Renault have been against such a development stop, but are said to have given way in Bahrain. Mercedes had already agreed in advance, and now the remaining engine manufacturers in Formula 1 are also open to “freezing”.

According to Ferrari team boss Mattia Binotto, the new engine concept should be “around 50 percent” cheaper than the turbo-hybrid units currently in use. And until then, no further investments should be made in the existing regulations, Ferrari and Renault are also forced to save costs due to the corona pandemic.

“This is positive news,” said Red Bull team boss Christian Horner: “It makes no sense to continue investing hundreds of millions of dollars in these engines.”

Lazio: This is how they could play

One million euros just for supplying the police: This is how...

Laudamotion – airline is said to have transported large amounts of...

Acquisitions by the Federal Court of Justice lifted: the process against...

Corona vaccination – General practitioners will also be vaccinated from April!...