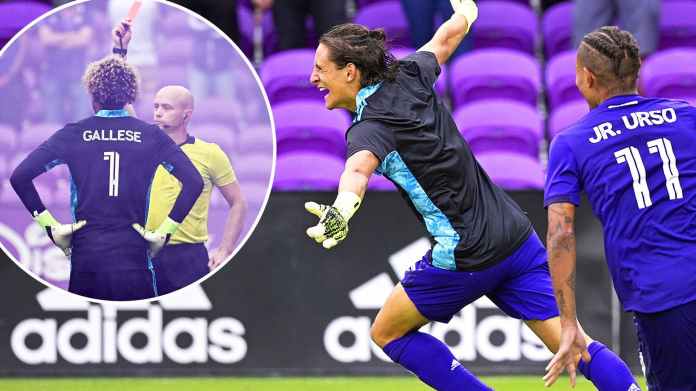 Orlando defeats New York City in what is arguably the craziest penalty shoot-out in recent years and moves into the semi-finals of the MLS playoffs. A defender with goalie gloves becomes a great hero.

The drama takes its course as New York’s Valentin Castellanos strides to the point. He is the fifth scorer for his team and because his teammate Maxi Moralez was the only player to miss before, Castellanos has to score to keep his team in the game.

But Orlando goalie Pedro Gallese parries the penalty. Big cheers from the winners, disappointed faces in New York City. Orland trainer Óscar Pareja jubilantly sprints into the dressing room – but has to be brought back. Because the thriller is not over yet. Gallese left his line too early and the penalty must be repeated. In addition, the Orlando keeper sees the yellow card. And because he already had one, there’s red!

Orlando sends replacement goalkeeper Brian Rowe to the pitch. This has long been between the posts, but the referee is still waiting until he allows the penalty shoot-out again. Because his video assistants probably pulled out the rule book and noticed that changes are not allowed during the penalty shootout. Rowe has to leave the field again – and defender Rodrigo Schlegel into goal. Finally, Castellanos still hits.

Then it will be the turn of Nani, the former Portugal international and Manchester United winger. And Nani actually fails. Everything balanced again. After two more successful shooters, it is Gudmundur Thorarinsson’s turn for New York. And it comes as it should: Rodrigo Schlegel, the Argentine defender with gloves and a resounding name, parries! Benji Michel then makes everything clear and still secures Orlando the ticket for the playoff semifinals. Wow!

Recall! This hemp oil can cause paranoia – economy

Katherine Heigl has titanium disks on her neck after her operation

What is still open over Christmas and New Year’s Eve