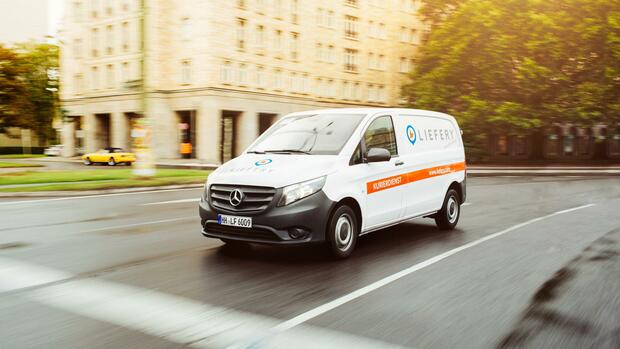 Liefery transporter
The end of the Hermes daughter came as a surprise.

Düsseldorf, Hamburg The employees of Liefery had sheer horror on their faces when the management announced the end in a digital works meeting on Friday. The parent company Hermes had surprisingly decided that the same-day delivery specialist no longer fits into the strategic direction and will be closed at the end of February 2021. Around 170 jobs are affected.

Liefery had recently shone with good figures: Managing Director Nils Fischer said in an interview in mid-October that sales should increase by 40 to 50 percent this year and that the company is operating profitably.

Due to the effects of the pandemic, the demand for delivery had grown so much that Liefery had just hired 20 new employees. A Hermes spokeswoman also admitted on Friday when asked: “Yes, key figures have developed positively at Liefery – recently also due to the Corona situation.”

Nevertheless, the strategy shift now takes place. The Hermes management justified the step with “strategic considerations”. In a message, the company does not skimp on praise for the subsidiary and emphasizes that Liefery was able to “convince well-known dealers” and especially score “with digital services and transparent recipient communication”. But this business is now to be “designed out of Hermes Germany”.

Many business partners were offended by the decision. Retailers such as Rewe, Hellofresh, Nespresso, Apple, Würth and Zalando rely on the start-up founded in 2014 by the current managing directors Nils Fischer and Jan Onneberg for a large part of their deliveries. Finding a comparable alternative by the end of February will be practically impossible.

Hermes must have increasingly seen Liefery as a competitor in-house. At least Hermes Germany emphasizes in the announcement that by investing hundreds of millions in additional locations and sorting technology, it has significantly expanded its own performance in recent years – in the area of ​​next day delivery, where Liefery also has its focus.

Hermes itself cannot replace the service provided by the subsidiary

Hermes itself, however, is not in the slightest able to replace the service that Liefery is providing today, says an insider. “Where it makes sense and is operationally possible, we will examine offers for the award of contracts by Hermes and of course generally seek discussions with the clients,” said a Hermes spokeswoman vaguely when asked. At the same time, however, she confirmed that Hermes could not give the customer a clear perspective: “As of today, we cannot make a final statement on this.”

This hits the fashion retailer Asos particularly hard. As the exclusive delivery partner, Liefery delivers the parcels for the online retailer in all German metropolitan areas, sometimes on the day of the order. In Berlin, in a pilot project that has received particular attention, it is delivering the goods in electric vehicles bearing the Asos logo. There are only a few specialists on the market who could provide this time-critical service – and their capacities are fully booked.

In the company it is suspected that Liefery’s hiring is also related to the entry of a new investor at Hermes: The Hermes parent Otto Group had sold 25 percent of Hermes Germany to the financial investor Advent. Now the organization should be streamlined and investments should be concentrated on Hermes. Liefery was obviously bothered by the fact that the bottom line is currently not making any profits.

“The partnership with Advent and Liefery’s exit from the market are to be viewed independently of each other,” said the Hermes spokeswoman. But she also emphasized: “Both decisions contribute to the goal of further developing Hermes’ core business within a highly dynamic and highly competitive market environment in order to be able to grow successfully.”

We hear from customers that they spontaneously considered taking over Liefery’s services and continuing to do so on their own. That was definitely possible, as the actual transport is carried out by a network of 5000 parcel drivers who are organized as subcontractors. But there was no concession on the part of Hermes. Apparently the fear of competition was too great, they say.

100 arrests during protests in Belarus

Broadcast canceled: The worm was inside in 5:00 p.m. “Tagesschau”

FC Bayern: Fine for Kingsley Coman – he should have “processed”...

RB Leipzig “ripe” for the title fight against FC Bayern –...