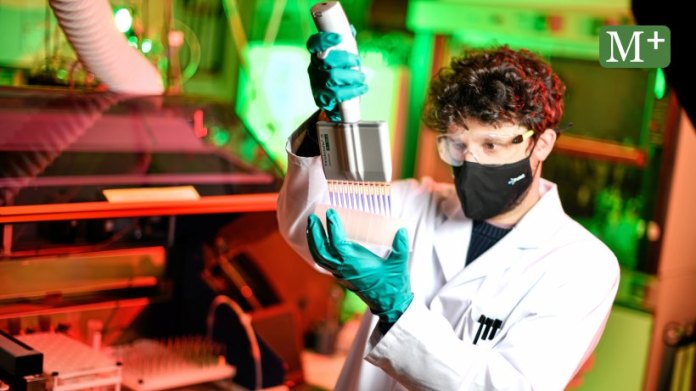 Berlin. A vaccine start-up from Adlershof, an energy storage developer from Tempelhof-Schöneberg and a charging technology developer from Wildau are among this year’s winners of the Berlin-Brandenburg Innovation Prize. The award was given on Friday evening on the Internet. The jury had previously selected six winners from 221 applications. Four of the coveted awards went to Berlin, two to companies from Brandenburg. The winners will each receive 10,000 euros.

The submissions covered the entire spectrum of noticeable innovative strength across Berlin and Brandenburg, said jury chairman Oliver Günther, President of the University of Potsdam. “In particular, the thematic breadth of the award-winning submissions shows the creative dynamism of the region, which is also noticeable economically and which is particularly helpful in difficult times,” he explained.

Peptides are said to help against Covid-19

The start-up Belyntic is one of the Berlin award winners. The scientists are currently working primarily on a new vaccine against the coronavirus in a laboratory in Adlershof. As the Berliner Morgenpost already reports, Belyntic is taking a different path than the biotechnology groups Biontech or Moderna. In the past few weeks, both companies had presented promising forecasts with a view to an imminent vaccine against Covid-19.

In its work, the young Berlin company relies on a so-called linker molecule, with the help of which undesirable impurities in the peptides produced can be separated more effectively than before. This enables researchers to find the peptides more quickly that actually trigger an immune response in the human body and thus fight the Sars-CoV-2 infection. At the same time, a potential vaccine would be longer effective and easier to store. “The process enables a significantly higher level of reliability in drug research and can make personalized peptide medicine, for example to combat cancer, a reality,” said the jury for the innovation award.

Berlin’s Senator for Economic Affairs Ramona Pop (Greens) explained with a view to the award ceremony that great innovations could be awarded despite difficult conditions. “They not only show how much inventive talent there is in our region, but also how much flexibility there is in our innovators during the crisis,” continued Pop.

Your official colleague from Brandenburg, Minister of Economics Jörg Steinbach (SPD), explained: “The Berlin Brandenburg Innovation Prize makes it clear in this extraordinary year how much we depend on courageous people who not only make an economic but also a social contribution to Berlin and Brandenburg Afford.”

Steinbach is alluding to another award winner from Berlin: The Regional Hero company from Wedding was also honored in the evening. The company emerged from the non-profit platform “Helfen.Berlin”, which sold vouchers for cafes, restaurants and small shops during the first Corona lockdown. “In order to further strengthen the regionality, digitization and sustainability of small companies in Berlin and Brandenburg, Regional Hero GmbH supports them with digital solutions and advises them on the future,” said the jury.

ME Energy – Liquid Electricity GmbH was also awarded. The company from Wildau received an innovation award for the development of a new charging solution that should enable the profitable and widespread use of electromobility. The “Charging Node” charging solution enables electricity to be charged for a range of 200 kilometers in just ten minutes, regardless of any existing infrastructure. “There are no high costs and limitations due to the power grid connection and the operation and use of charging infrastructure is profitable for the first time,” said the jury. Behind this is the patented concept and a new technology.

Another award winner is also grappling with the future of the energy system: In order to generate sustainable renewable energies, the company Lumenion from Tempelhof-Schöneberg has developed a storage device of the same name. It should be able to store electricity as heat at 650 degrees Celsius. “The stored thermal energy can then be used at a later date and cost-effectively as process heat for industry or as district heating,” it said. The AI ​​company Lana Labs from Kreuzberg and the film effects specialist Volucap from Babelsberg also received awards.

The Berlin-Brandenburg Innovation Prize has been awarded since 1984. Since then there have been more than 160 award winners and over 4,000 applications. Each year, innovative and outstanding work from the region is awarded.

The wine quartet from Stuttgart: A fine Lemberger to say goodbye...

Schumacher’s week: everything will be fine. Stay positive. And...

Duchess Meghan: Insider: “She took the time to process the miscarriage”

6.4 million people in Germany lived in overcrowded apartments in 2019