Week 12 in the NFL was possibly the final matchup between Mahomes and Brady – with the better ending for Mahomes. But why did it get so tight again? Also: The complete quarterback madness in Denver, a tough reality check for the Cardinals, new balance of power in the AFC South – and who are the Raiders really? SPOX editor Adrian Franke brings you up to date on Monday with his ten most important points and assessments for the past NFL Sunday, all recaps from Sunday are here.

1. All the madness in Denver

Even under the undeniable premise that it is an unusual season in every respect – what happened there in Denver on Sunday tops it all off so far. On Saturday night it became known that the Broncos would have to do without their four quarterbacks Drew Lock, Jeff Driskel, Brett Rypien and Blake Bortles against the Saints. Driskel had tested positive for Corona on Thursday, the other three were identified as high-risk contacts on Saturday and isolated according to NFL protocols.

An operation on Sunday was impossible, and Denver would have had no chance to sign another quarterback at short notice and then use him. For this, too, appropriate protocols must be followed and several negative corona tests completed, there was simply not enough time until the game on Sunday.

Above all, however, in the course of the latest developments, various sides were only too quick to fire uninformed takes into the social media stratosphere: The league would be the Ravens – their game against Pittsburgh because of 20 players on the Covid-19 list was postponed for the second time – prefer; Denver, on the other hand, would have to compete without quarterbacks.

You can criticize the league’s protocols, but you cannot accuse the league of preferential treatment: the NFL is constant in its own protocols. The Ravens (meanwhile also the Steelers) had new positive tests themselves until the day of the game – Driskel’s positive test in Denver came on Thursday. Information from The Athletic According to Denver’s quarterbacks in the talks to disclose the contacts with Driskel, initially but not honest. Only later did it emerge – according to the reports – that Denver’s quarterbacks had been together for a long time without masks and without the tracking devices. That would also explain the delay in the whole process.

If this is confirmed, the Broncos will be severely punished for it – and rightly so. And the Ravens will also be punished, the outbreak in Baltimore apparently also goes back to a violation of the mask requirement. The league just got the saints and patriots fined. The Broncos had to play on Sunday because the positive test was three days before kickoff, while the Ravens had positive tests on Thursday and Sunday.

It’s not about giving Baltimore respite because Lamar Jackson tested positive – he couldn’t play on Tuesday either. It’s about halfway making sure that the Ravens can travel as an away team without contagious players traveling with the rest of the team. In Denver, the contact verification showed that while the quarterbacks needed isolation, the rest of the team wasn’t at risk. This is in stark contrast to the situation in Baltimore, which is long out of control. It is still unclear when the Ravens can travel “safely” again.

In the end, the Broncos are – as the reports agree – completely responsible for having to play this game without one of their regular quarterbacks. From a team perspective, because they didn’t isolate any of the four (!) Quarterbacks from the rest – and of course the players, because they obviously thought that the whole mask and contact tracing thing wasn’t that important to them. All the more important that Vic Fangio made a clear statement after the gamethat can only be signed.

Saints: What’s next for Taysom Hill?

Practice squad receiver Kendall Hinton stepped in as an emergency quarterback. Hinton had played quarterback for Wake Forest in college for several years before retraining to slot receivers in his final season. A request from the Broncos to have offensive quality control coach Rob Calabrese (ex-UCF quarterback) start as quarterback was rejected by the league on Sunday. Complete madness.

The game then went about as expected. The Broncos couldn’t do anything through the air, but at the same time didn’t play an option offense to the extent that one might have imagined – which would have been convenient for Hinton and clearly relieved him. At the same time, of course, Denver had virtually no time to rehearse such moves any more, one shouldn’t forget that. As expected, the Broncos had no chance offensively, the 112 offense yards mean the fifth lowest value in franchise history.

But the idea of ​​Taysom Hill should not go unmentioned in the entire Broncos chaos. He was undoubtedly a positive surprise against the Falcons, but even last week the hype seemed excessive. Against a much better Broncos defense, Hill’s extremely slow overall mental process in the pocket became apparent. Several times he was late with his reads and held the ball too long. Anticipation is often completely absent and in the course of the game he was then used more as a power runner than as a passer.

Its limitations are clearly visible, even if in the end it made no difference against a desolate Falcons team or against these Broncos. So far he has only had to “play quarterback” relatively little. Perhaps in the second game the Falcons offer a better test to learn more about Hill. So far, he hasn’t had to show much on balance, but he has also shown little that would suggest a steep quarterback development.

Skepticism remains appropriate here, but in view of his contract for 2021, we will receive more samples and at least more data points.

2. The Chiefs – the only title contender?

“Show of force” is almost too nicely the phrase for what the Chiefs did to Tampa Bay in the first quarter. It was 17-0, and Kansas City, more or less without even trying to run the ball against the strong Bucs Run defense, completely dismantled Tampa through the air.

“Man coverage without safety support behind it. We don’t see that too often,” said Patrick Mahomes quite bluntly after the game. Mainly meant was poor Carlton Davis, whom Mahomes and Tyreek Hill gave nightmares to nightmares whenever Davis was alone against Hill.

Tampa had apparently entered the game with a plan to give Davis a try at this one-on-one matchup in order to ideally get so much more defensive flexibility outside of this matchup. But if you test it against KC, you can quickly get several Big Plays poured out. Hill went over 200 receiving yards in the first quarter, Mahomes threw big play on big play, it was a show.

The Chiefs came out with the usual amount of creativity in the play designs from the start and were once again incredibly good at attacking every weakness and every matchup that the defense offered at that moment. It was grist to the mill for those who say that there is no such thing as a dominant defense – over a period of one season – in today’s NFL. And it is difficult to argue against it here.

Of course, strong defenses can still win individual games and dominate individual opponents if the matchup fits – the Bucs themselves in the game against the Packers would be the ideal example of this. But defenses are simply much more dependent on their respective matchup than offenses week after week, and whoever prioritizes the desire for a dominant defense in today’s NFL from the perspective of the overall squad planning of his team, is probably turning wrong here.

But why was it so tight in the end? Two thoughts on this: Kansas City has shown a tendency several times this season to take the foot off the accelerator pedal worryingly far within a game. Admittedly, when it came down to it, they could usually hit the pedal again, but that’s a game with fire, especially against an offense with the individual class of the Bucs. Brady, who initially missed several deep shots again, improved, Tampa even used a little more motion and play action and was promptly rewarded for it.

Kansas City, on the other hand, got nervous in the second half. Mahomes threw a somewhat inaccurate pass at Mecole Hardman, who then dropped the ball instead of sprinting into the end zone for a potential 80-yard touchdown. Mahomes himself also made more mistakes and threw a few “I don’t care” balls with Ryan Fitzpatrick character towards secondary. And Andy Reid himself became more passive, especially the punt at fourth-and-two on his own 43-yard line at a 27:10 lead late in the third quarter was a very questionable decision.

3. New balance of power in the AFC South?

It was only two weeks ago that the Colts delivered a dominant game in Tennessee, defeated the Titans clearly and controlled the game completely over long stretches, especially defensively. With a win in the second leg they could have made a preliminary decision in the division – instead there is a 45:26 victory for Tennessee, and the question: How could that happen?

The game had already been decided at half-time. Tennessee led 35:14, and Derrick Henry had 140 rushing yards and three touchdowns. Only 38 more yards were added after the break. But of course the first half was the story of the game, and even if the signing of DeForest Buckner was considered the “missing piece of the puzzle” for the Colts defense – that seemed an understatement.

Without Buckner and without Denico Autry on the defensive line, the Colts completely lost the line of scrimmage. Where Henry last – not only in the first game against Indianapolis – had to regularly fight for every inch, suddenly there were wide open gaps.

Tennessee completely dominated here in the first half, the Titans played absolutely simple offensively, but didn’t have to do much more than run the ball. AJ Brown ensured the only real big play through the air with another extremely impressive catch-and-run to the 69-yard touchdown, once again an enormous effort after a crosser.

What does it do with this division now? Both teams remain inconsistent, both are rather just outside the top 10. The Titans still have a really tough opponent (Green Bay) and next week against Cleveland a potentially unpleasant task. The Colts still have to go to Pittsburgh, the Raiders and twice against Deshaun Watson and the Texans, Tennessee only expects the latter one time.

Tennessee’s identity is clear, and if this physique scores not only on the line of scrimmage, but also with Henry and Brown, then Tennessee has a high explosive potential. The Colts are the more complete team, but the more uncomfortable schedule could ultimately make Indianapolis slip just behind Tennessee.

Feller after Patzer: “I thought I was smarter” – winter sports

Spanish Supercopa: That is why FC Barcelona vs. Athletic Bilbao is not shown live on TV and LIVE-STREAM

Serie A: Inter shoot their way to the top of the table against Juve

Australian Open: 72 tennis players have to be in hotel isolation for 14 days

Crime – Berlin – Man without a license: chase with police...

Sony starts with a streaming portal for its own TV sets

Stefanie Hertel: These stars come to their Christmas gala

The surprise of the Bundesliga: Stuttgart’s guarantee of success does not...

Decision on the controversial industrial area in the north of Frankfurt... 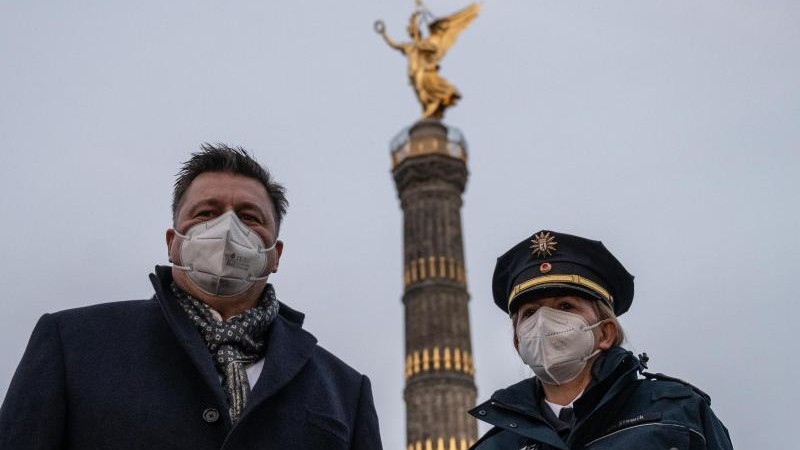