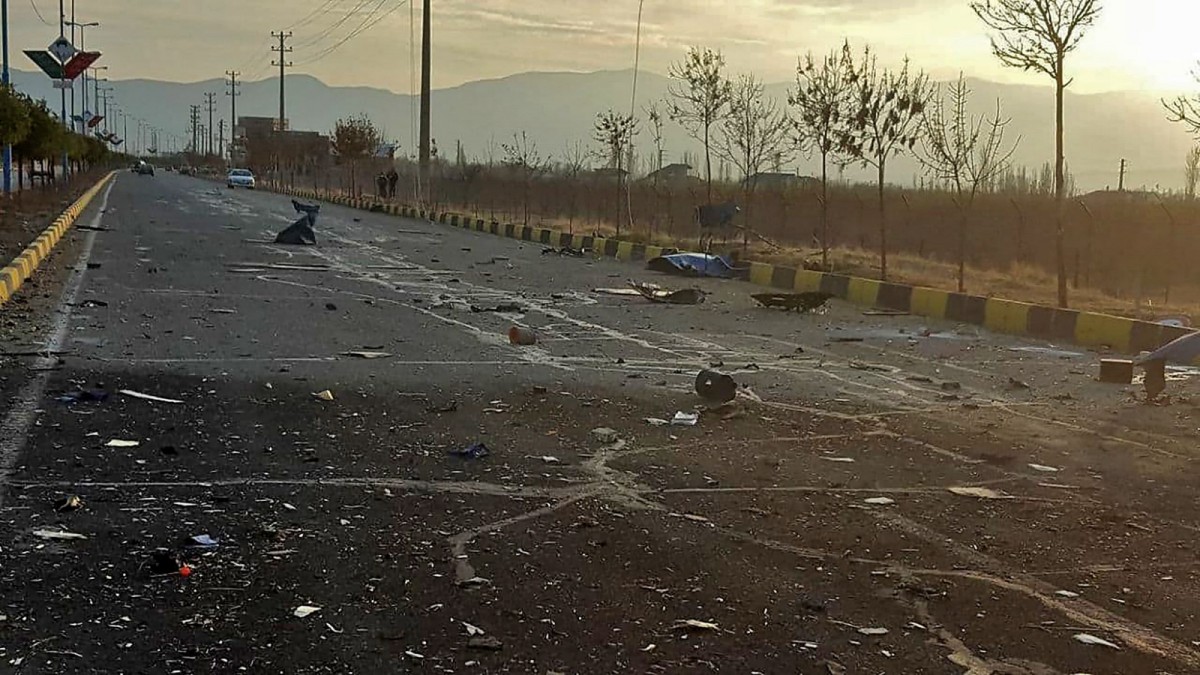 The year began with a clap of thunder in the Middle East: On January 3, a US drone killed Qassem Soleimani at Baghdad International Airport. The general of the Iranian Revolutionary Guards commanded the Quds Brigades, the unit that is responsible for the regime’s overseas operations in Iraq, Lebanon, Syria and Yemen, as well as for terrorist attacks in other countries. The year draws to a close with the death of a similarly important Revolutionary Guard: Mohsen Fakhrizadeh.

Soleimani was the architect of the Iranian strategy of waging a shadow war in the region with the help of allied militias, especially in Iraq, Syria and Lebanon, but also increasingly in Yemen. He was the mastermind behind the “Axis of Resistance” against Israel and the US.

And the driving force behind Tehran’s increasingly aggressive reaction to Donald Trump’s exit from the nuclear deal in May 2018 and the “campaign of maximum pressure” with the drastic tightening of American oil and financial sanctions. The regime in Tehran called its response “a campaign of maximum resistance”.

Fakhrizadeh referred to Western intelligence agents as the “father of the Iranian bomb” or Tehran’s Oppenheimer, a reference to J. Robert Oppenheimer, who led the development of the first nuclear weapons during the Second World War as part of the secret Manhattan project in the USA. According to the government in Tehran, Fakhrizadeh fell victim to an attack on his car on Friday. According to the International Atomic Energy Agency (IAEA), since the end of the 1980s he has been in charge of various projects that “are relevant to the development of a nuclear explosive device” – a very cautious description of the military’s nuclear program.

The covert war is fueled again

The killings of these two prominent figures of the Iranian regime show the vulnerability of Iran, but are only the macabre climaxes of a covert war in the region, which is fueled again by the assassination. The Supreme Leader of the Islamic Republic, Ayatollah Ali Khamenei, called on Saturday for “decisive punishment” of the perpetrators and those behind them. President Hassan Rohani announced that the Iranian nation would react to the death of Fakhrizadeh “in due course” and not fall for the “Zionist conspiracy”. Like Foreign Minister Mohammed Javad Sarif, who spoke of “state terrorism”, he blamed Israel.

There had already been a series of mysterious explosions in Iran in the summer, which can most plausibly be explained as sabotage by the secret services. In June, a building related to the ballistic missile construction program was blown up at the Parchin military base near the capital. The Iranians spoke of a “gas explosion”, and American and Israeli intelligence officials denied they had anything to do with it.

A few days later, an explosion on the site of the Natans uranium enrichment plant destroyed a hall in which Iranian scientists were working on the development of new, more powerful gas centrifuges. With these machines, the fissile uranium isotope 235 can be concentrated – for power plant fuel rods to three to five percent, for nuclear weapons to more than 90 percent. The Iranian government soon spoke of sabotage itself.

Meanwhile, Iran is trying to use militias controlled or supported by the Revolutionary Guards to attack American targets in the region, to hit Israel or Arab US allies, above all Saudi Arabia. Only on Tuesday did the Houthi militias from Yemen fire a kind of cruise missile at the oil plants of the Saudi state-owned Aramco near Jeddah. Riyadh responded with heavy air strikes on Yemen’s capital Sanaa on Friday.

As with the drone and cruise missile attack on Aramco in Abqaiq and Khurais in September 2019, which caused hundreds of millions of dollars in damage, the weapon is likely to have been built with Iranian help, if not the Revolutionary Guards controlled the use. On Wednesday, a tanker ran into a mine in the Red Sea off the Saudi coast – an incident reminiscent of similar acts of sabotage in the Strait of Hormuz and the Gulf of Oman that heightened tensions last year. The United States and other Western countries saw the Revolutionary Guards at work here too.

Air strikes on targets in Lebanon and Syria

In July and August, Israel’s air force bombed Hezbollah targets in Lebanon after the military said there were attempts to infiltrate the border area to attack Israeli soldiers and an exchange of fire in the second incident. Israeli fighter jets also regularly attack facilities of the Revolutionary Guard in Syria; In the past week alone, they flew three waves of attacks on targets near Damascus and Albu Kamal on the border with Iraq. More than 20 militiamen are said to have been killed as well as officers of the guards.

This shadow war is now at a point again at which it could turn into an open military conflict. After Soleimani was killed, Iran was satisfied with a rocket attack on a US base in Iraq, which had primarily a symbolic effect. A little later, however, the Revolutionary Guards shot down a passenger plane with more than 180 occupants near Tehran because they expected a US attack.

Iran’s leadership has reasons to wait for the handover in Washington and to hope for a better relationship under new President Joe Biden. On Wednesday, President Rohani was confident that the problems with the US under Biden could be “easy to solve” if he kept his campaign promises and led the US back to the nuclear deal. However, the hardliners in Tehran do not want an understanding with the USA, but rather expel them from the region. In addition, Donald Trump will be in office for more than 50 days – and it is completely open what will happen until then.

Drama at K2: Sergi Mingote falls to his death in a summit race

Joe Biden’s Inauguration: Fear of infiltration of the security forces

Sudan: More than 80 dead in fighting between rival ethnic groups in Darfur

Stuttgarter in partial lockdown: singing songs and going for a walk...

Mobile vaccination stations: The fleet of the Berlin Corona Hope |...

Old spouses are attacked one after the other – Germany and...

Donald Trump: The Mar-a-Lago neighbors no longer want him – even...