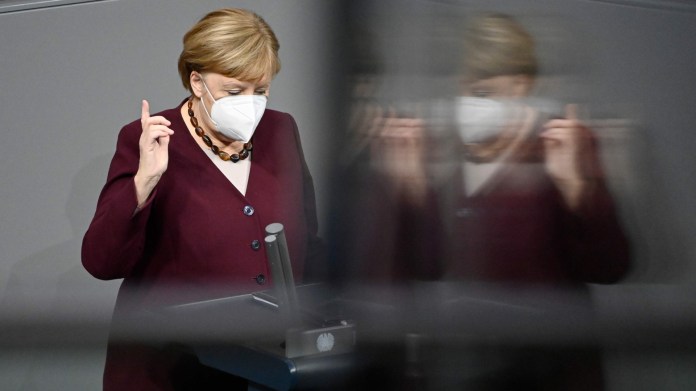 Before the Bundestag, Chancellor Merkel defended the extension of the “lockdown light”. She is aware of the severity of the measures, but the goal of reversing the trend in corona infections has not yet been achieved.

One day after the new consultations with the Prime Minister, Chancellor Angela Merkel defended the agreement on an extended partial lockdown in the Bundestag. She spoke of a “sideways movement” that had been achieved with regard to new corona infections, but not yet a trend reversal.

The return to a partial lockdown at the beginning of November was “inevitable” and the measures had led to contacts in the population having decreased by around 40 percent, Merkel continued. She stressed that it was impossible to imagine where we would be today if this national effort had not been tackled.

Relaxation would have been “irresponsible”

But the number of infections “is stagnating at a level that is far too high,” warned Merkel that in some regions of Germany they would even increase. The number of patents in the intensive care units continues to rise, only on Wednesday the Robert Koch Institute had reported a new high with more than 400 deaths within one day. “That must fill us with concern,” warned the CDU politician. That is why it would have been “irresponsible” to relax the protective measures, especially the contact restrictions.

“The worst – the excessive demands on the health system – has been prevented so far,” stressed Merkel. That is “a first, but not yet sustainable success”. If the intensive care units were full, it would be too late. Even a look at the neighboring EU countries should lead to the conviction that “we cannot afford to be overwhelmed by such demands”.

The number of infections must fall – everywhere

The goal of the federal and state governments remains the same as in the past few weeks: The so-called incidence value should fall back to the level of a maximum of 50 new infections per 100,000 inhabitants per week. According to Merkel, the health authorities will then be able to track contacts again and better limit the spread of the virus. But currently there are 62 districts nationwide in which the incidence value is even below 100,000 inhabitants for more than 200 new infections within a week. The same applies to the city-state of Berlin. In these areas, the measures should be tightened again, beyond the decisions taken for December.

Merkel emphasized several times that the number of infections had to fall nationwide: It would not help if the numbers in Schleswig-Holstein and Mecklenburg-Western Pomerania were low, but increased in Thuringia and Saxony. “The average doesn’t help us,” emphasized the Chancellor.

All areas of society should be protected

In her government statement, Merkel summarized the measures adopted for the partial lockdown. All areas must be protected: health, social affairs, education, the economy. Protecting all of this serves social cohesion.

Especially on the point of the mask requirement and the stricter distance regulations for customers in retail from December, she took a more detailed position: The mask could reduce the risk of infection and serve as protection. But you cannot guarantee absolute security. That is why the stricter requirements are necessary. “We mustn’t lull people into a false sense of security,” warned Merkel.

A “week of protection” before Christmas

With a view to Christmas, Merkel appealed to the people to observe “a week of protection” before the festival. Special regulations should apply over the Christmas days and the turn of the year, for example with somewhat relaxed contact restrictions. The federal and state governments recommend that you go into a voluntary quarantine beforehand, “so that the number of infections does not skyrocket over the holidays,” as Merkel put it in the Bundestag today. That is why the federal and state governments wanted to consult with the churches on the subject of worship services. They shouldn’t take on the character of a major event.

Merkel left it open how things will continue in January. Before Christmas, she wants to consult with the country chiefs again. Merkel does not assume that there will be easing beforehand.

Once again she called the corona pandemic “the greatest challenge since the Second World War – for Germany, the EU and the whole world”. And even now there are some difficult months ahead. “The winter will be difficult, but it will end,” said Merkel. Because there is hope – on the one hand the progress made in the search for vaccines, on the other hand because “we have much more knowledge about the virus than at the beginning of the pandemic”. “We know how it works,” said Merkel. And that is why we also know that “the virus cannot be cheated, it cannot be circumvented”. And so Merkel concluded with the now almost mantra-like appeal: Everyone must actively contribute to reducing the number of infections. “We have to stand up for one another and for one another. If we take this to heart, we will also come out of the crisis.”

Sovereign victory in the semifinals: Djokovic for the ninth time in...

Van der Bellen with criticism of the “Frugal Four” – Coronavirus...

“The good cop – only dead people don’t talk” on ZDF

Cloud migration is increasing, security awareness is not