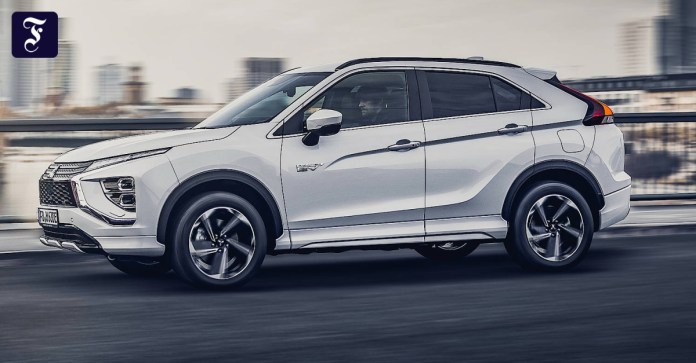 IIn the summer, dark clouds had moved over the German Mitsubishi headquarters in Friedberg. It was announced from Japan that no more new models would be developed for Europe, which looked like a withdrawal in installments. But the all-clear soon came. It goes on, there are also new cars, it said. The first model is now announced for February 2021.

The SUV Eclipse Cross, which has already been sold 27,000 times in Germany since 2017, is being thoroughly revised and from now on operates as a partially electric plug-in hybrid. In addition to significant changes in design, the body has grown by 14 centimeters to 4.55 meters. While the interior has only changed slightly, the new rear is immediately noticeable. Most of the gained length is in it. The two-part rear window, often criticized, is now a thing of the past.

The Eclipse Cross PHEV combines a 2.4 liter four-cylinder gasoline engine with two electric motors, each of which is located on the axles. Exact data is not yet available, but since the technology comes from the larger Outlander, you can expect a system output of around 200 hp and a battery with a capacity of almost 14 kWh. The purely electric range is specified at around 60 kilometers. The price for the hybrid, which can already be ordered, will be 36,390 euros after deducting all subsidies. Production in Japan will begin in two weeks, and after an eight-week voyage, the first vehicles should arrive in Germany.

The current Mitsubishi Eclipse Cross, which is available in two engine variants as gasoline and diesel, will be sold until further notice. It is still open whether the new model will be offered with other engines. The new Eclipse will initially only be marketed in a well-equipped intro edition, with 18-inch alloy wheels and many other extras and assistance systems. All Eclipse have all-wheel drive and a rear view camera, internet is a matter of course.

Mask requirement is expanded in Berlin

Reinforcement of the management team in Brau Union Austria

HSV scores in Heidenheim: Ulreich and Terodde collect the five

EMA advocates the use of the corona vaccine