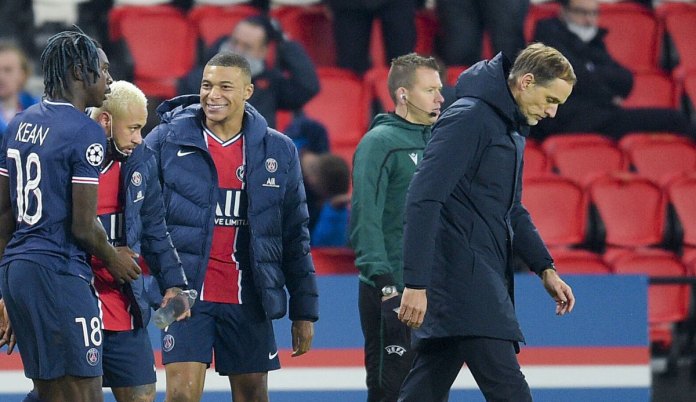 After PSG’s narrow 1-0 win against Leipzig, Thomas Tuchel sounded the alarm about the physical condition of his team. Julian Nagelsmann is annoyed by the referee’s decision. After the sovereign 3-0 victory over Club Bruges, BVB is very satisfied.

SPOX and Goal capture the votes of DAZN and Sky for the Tuesday games together.

Julian Nagelsmann (trainer RB Leipzig): “I think Paris had no real chance in the game, and the penalty was a joke. That at Champions League level – that’s really sad. That was a swallow, there was zero contact. The video assistant has Probably seen another game. Sometimes nuances make the difference and in the end it would have been deserved if we had rewarded ourselves. Now we have worse cards in the group, we have to win our two games and hope Paris don’t succeed. ”

… the defeat: “It’s very bitter, we played a very good game, showed an incredible amount of mentality and were the better team for long stretches, if not the entire game. We can be very proud of this performance despite the defeat. No reproach to the team. ”

… the disputed penalty kick: “The referee gave it, that’s what we got the VAR for. If it wasn’t a penalty, all the more sad.”

… the situation in the group: “We have to win both games now to have a theoretical chance of progressing. We started to make it to the round of 16, that hasn’t changed. We saw that we can play at this level, that makes me optimistic. ”

… the lucky victory in the end: “I’ve seldom seen a Champions League win without luck. We have no reason to apologize. We didn’t allow a big chance. I know what the guys deliver, with pain injections on the field. We have Players who haven’t had regular training for weeks. You can’t expect the same as if they were in full rhythm. Otherwise it wouldn’t make sense to go to training. ”

… the personnel bottleneck at PSG: “We have enough to do, we play with players who are beyond what can be expected of them physically. That’s why we play a game every three days. We are under pressure that we want to get through the group. I’m incredibly happy with the result, we fought and had the necessary bit of luck. ”

… Neymar and Kylian Mbappe: “They both know the pressure, everyone always expects miracles. They put themselves completely at the service of the team. It’s not okay what we’re doing with Neymar. We’ll put him on the field and then he should be the one, too does the crucial things. But he’s just been missing training sessions for weeks. He’s missing games to get into the rhythm that would actually be normal in November. I always tell the same thing, the horse actually rode dead. It sounds like an excuse, but it’s just the reality. Big compliments to the team. They were physically executed after a game like that. We have reached the limit.

… the upcoming duel with Manchester United: “We lost the first leg unluckily. We have the next small final in a week and will need at least the same physical dedication and willingness – and then that little bit of luck again.”

Lucien Favre (Borussia Dortmund coach): “We really wanted to win the game. We had our chances to score straight away. The 2-0 win just before half-time helped us a lot. That was good.”

Philippe Clement (coach Club Bruges): “I have always said that Dortmund are the big favorites in our group. If you want to win something against such an opponent, you need a miracle. The difference in level was just too big.”

… the game: “We played very confidently, the structure of the game was very good. The zero held, that’s the most important thing. We destroyed their chances through our communication.”

… the team: “” We brought in good characters who consistently pull through on the pitch and don’t back off. And Erling is an outstanding player at the front who makes things easy. Nobody talks about mentality anymore. The task was clear: we can make a big point. ”

… the schedule: “The game plan is extremely tight. We have to rotate a lot. Everyone has to be ready. There is not much left to think about. The next game is just around the corner, I don’t think that’s that bad at all.”

… the second leg against Lazio: “We could have beaten Lazio in the first leg. I am convinced that next week we will perform as we did today.”

… his situation: “I’m glad I’m playing. My team believes in me. It was a tough situation for me, but now it’s getting better. I want to keep going.”

… Erling Haaland: “He’s a fantastic player. I’m happy to play with him. He works hard on and off the pitch.”

… the game: “We achieve good results, play good games. Today we made a big step in the Champions League. Then there is also a bit of lightness that can be felt in the team. We still have a lot before Christmas. We have to remain greedy . On Saturday we will continue against Cologne. An opponent that we want and have to beat. With all the ease, it is important that we don’t lose sight of our goals. ”

… Jadon Sancho: “He’s always up for it when he plays. But he also has phases in which he can certainly improve. Jadon played a good game. We have a lot of free-kickers, but he grabbed the ball with confidence and a very nice goal That will give him a boost. We need him, he is very important to us – and he will get even better. ”

… Erling Haaland: “Erling is fit and wants to play every three days. In due course we will get to the point where we regulate his playing time a bit. It’s not that far yet. He is incredibly important to us and at the moment we don’t want to replace him at all. ”

Alaba, Upamecano or Kabak: Liverpool are looking for a new defender

Take That: That’s what Gary Barlow, Robbie Williams and Co. are...

Country air instead of corona muff: Holiday farms in Germany

Bundeswehr: General Inspector calls for the rapid acquisition of drones Fiction series planned for the resignation of Pope Benedict