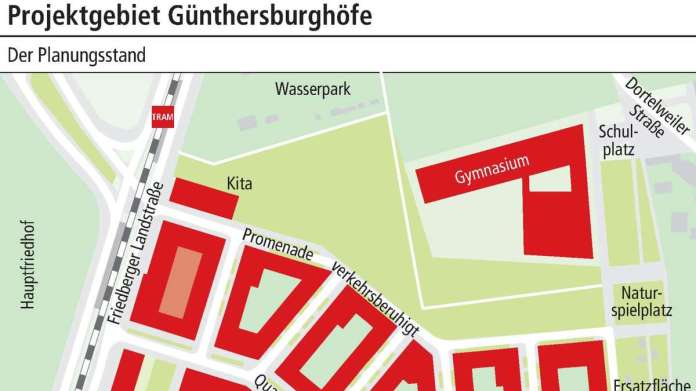 The Frankfurt planning department head Mike Josef (SPD) has defended the plans for a new quarter with up to 1500 apartments in the Nordend against criticism from citizens’ initiatives, from the local council and from the Greens, who form a coalition with the CDU and SPD. He emphasized that a social mix could develop in the 16.6 hectare area. Almost 500 apartments would be publicly funded, and almost 250 would be secured for cooperative and community projects. This creates affordable living space for 1,500 to 1,700 people, said Josef.

For a long time the city only built social housing in poorer districts. At Günthersburgpark, a well-connected quarter in the country can now be created in a prime location, in which children who grow up in social housing can go to school together with children from condominiums, said Josef. A primary school, a secondary school and three daycare centers are planned in the area.

Josef wants to disclose the development plan for the quarter, on which the administration has been working on behalf of the city parliament since 2017, by January at the latest. Then the plans can be viewed and commented on. In a next step, the city would incorporate statements from the authorities and citizens. However, there is some evidence that the next steps will be delayed and that nothing will happen before the local elections in March.

Several citizens’ initiatives have been fighting for years against the plans for what they call the “green lung” at Günthersburgpark, where there are many allotment and leisure gardens. Now, at their party congress, the Greens have distanced themselves greatly from the project that their former planning officer, Olaf Cunitz, once pushed forward. You want the development to be limited to the areas that have already been sealed.

On Monday, Josef described it as not possible to implement this requirement now. “Then we would have to start all over again,” he said in front of the journalist: inside. In addition, almost nothing of the sealed surfaces belongs to the city. According to the current state of planning, a good quarter of the green spaces in the quarter will be built, it said. 39 percent of the total area remained unsealed. Part of the already built-up area is to remain sealed, part of the green area is to be added to Günthersburgpark, for example.

Josef also clearly opposed demands for further expert opinions. Environment officer Rosemarie Heilig (Greens) had requested new investigations into the climatic consequences of the development. Josef accused the coalition partner and his magistrate colleague, without mentioning them by name, of a lack of collegiality and a lack of sincerity. Anyone who continues to demand more public participation and further reports should be honest and say: “We don’t want the project,” said the planning department head. The head of the city planning office, Martin Hunscher, was irritated that individual members of the magistrate put in the room that the administration is not working properly.

There has never been a project in Frankfurt with more citizen participation, said Josef. The city also obtained extensive reports on the ecological effects. Climate issues already played a major role in the urban planning competition, said Josef. In the planning process, ecological aspects are of the greatest importance. Extensive work has been carried out on solutions to protect flora and fauna, the use of renewable energies, greening facades and courtyards, and rainwater management. Hunscher even spoke of a “pilot project for sustainable, climate-friendly urban development”. It was said that 1,000 trees fell victim to the plans is not true. 51 “formative trees” would be felled, said Hunscher and pointed out compensatory plantings.

Citizens’ groups have announced further resistance and threatened to escalate. “We will continue to fight for the preservation of the green lung with all means – and if necessary, make the green lung the next Dannenröder forest”, reports the campaign “Green lung remains – stop Instone”.

“I was vaccinated with AstraZeneca and I am so grateful!” –...

Snow and rain in Germany – miscellaneous things from Germany &...