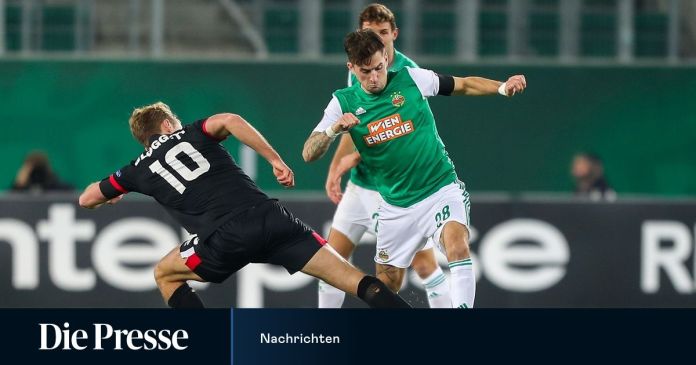 Rapid goes into the guest appearance at Dundalk with the greatest pressure, because only with a win does the chance of promotion remain a realistic one. Lask and WAC have the first preliminary decisions in their own hands.

What counts for a green and white victory

No losing is the motto for Rapid today (9 p.m., live Puls4) at Dundalk. Only with another win against the Irish champions do the Hütteldorfer have realistic chances in the promotion race with Arsenal and Molde. Instead of starting the journey with self-confidence as the domestic league leader, after the embarrassing 3: 4 in Ried it was time to work up. Was coach Dietmar Kühbauer able to shake up the team despite illness? In any case, he is represented in Dublin by his assistant Manfred Nastl. “The defeat was just not necessary and very annoying,” said sports director Zoran Barišić. “Attitude, mentality, focus, concentration – that’s what it’s all about.”

Rapid needs more defensive stability, especially since the Irish showed their counter strength in the first leg (4: 3). Back then, Yusuf Demir shone as a wild card, now Taxiarchis Fountas is fit – and Dundalk shouldn’t actually be a stumbling block.

Direct promotion duel for the Lask

Today (6:55 p.m., live Dazn) the Linzers can distance a direct promotion rival with a win against Royal Antwerp. Nevertheless, Dominik Thalhammer only wanted to speak of a preliminary decision to a limited extent. “If we win, yes. But on a very good day we are also able to take Tottenham points away, ”said the Lask coach.

In midfield, James Holland (red card suspension) and Lukas Grgic (injured) have to be plugged. Johannes Eggestein, who came in the first leg for the injured Marko Raguž and promptly scored the gold goal, should meet again.

WAC are on revenge

Wolfsberger AC ticked the corona worries before the home game against Dinamo Zagreb (6:55 p.m., live Dazn), this time only Matthäus Taferner (suspension after yellow-red) is out. “We know that it will be a key game to create the sensation, the promotion,” said coach Ferdinand Feldhofer. However, his team is not yet at 100 percent, there are only limited lessons from the first leg (0: 1). “We were one man less for half the time. And the players who played back then weren’t really fit either. “

With a win, the WAC could take the lead, a defeat would be expensive given the intact promotion opportunities of Feyenoord and CSKA Moscow. “We have to at least score, otherwise it will be difficult,” emphasized Feldhofer.

Impeachment: Trump could lose his office before January 20 – politics...

Almost 140 dead in new attacks on villages in western Niger

“Sentiment” against vaccine from AstraZeneca

Course of disease in Covid-19 – The search for the key...

Phase III reached and yet questions remain – but: The speed...