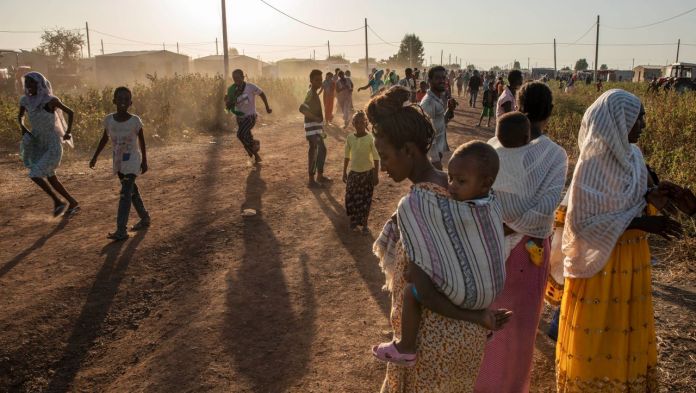 Wadihailu Kaflahum is still a kind man. What happened is probably God’s will, he says. Kaflahum is a day’s march from his home. He doesn’t know how those who are left are doing – his mother, his two daughters. Kaflahum needs God now, otherwise it would all make no sense.
Kaflahum stands on the edge of the so-called “Village 8”, a provisional transit camp for Ethiopian refugees in the border area with Sudan. Over two weeks ago he fled the province of Tigray in northern Ethiopia and left his hometown Mai Kadra.
Thousands now cross the border river every day in small, often leaky boats. In total, well over 40,000 Ethiopians have fled to Sudan. There are now reports that the Ethiopian army is trying to prevent people from fleeing.

The so-called “Village 8” was originally built by the government to relocate and compensate the people who were made homeless by the construction of a dam.

The UN must quickly ramp up capacities in Sudan

Before the war broke out in Tigray, it had fewer than a thousand inhabitants. There was a small market place, with less than ten small shops. More than 15,000 refugees already live here, according to the Sudanese camp manager. Together with UN refugee aid, they are currently rushing to massively increase capacities. The water tanks provided by Unicef ​​and which hold 15,000 liters are already much too small.

Kaflahum, a man in his fifties, foreman on a plantation in Tigray, was in the field when he heard the first explosions. That’s how he tells it. “Then the screams followed.” He speaks softly. “I tried to go back home to get my belongings, my family.”
Together with two colleagues, he is being held by an Amhara militia on the way, reports Kaflahum. Amhara is the neighboring province of Tigray. The regions have been hostile to each other for years and ethnic tensions have grown. The Amhara are claiming land that they say the Tigray occupied decades ago. Now they advance together with the Ethiopian army in Tigray. They have now occupied the land.

“When they found out I was Tigray, they attacked me, wanted to kill me. The commander kept saying that there was no such thing as a good Tigray, that I had to be killed. ”A higher-ranking officer then said that he should be let go. “Someone on the way will kill me, he said.”

Shots and screams in the night

Kaflahum ran off and hid in a millet field with his two colleagues until late at night. “One of the men suddenly went mad, trembled and cried with fear and anger, and ran towards the place. I climbed a little hill to see what happened – just in time to see them kill him in front of the church. ”

He stayed in the field. They heard gunshots and screams all night. Then they made their way to Sudan.


Wadihailu Kaflahum: “I tried to return home to get my belongings, my family”

What Kaflahum heard in the millet field that night was the Mai Kadra massacre. Several hundred people were butchered there. Most apparently with axes and knives. Amnesty International has not yet been able to clearly identify the perpetrators. Refugees tell of cruel fights:

Since the communication channels to Tigray are still cut, the individual reports are difficult to verify.

Wadihailu Kaflahum, the man who was hiding in the millet field, says he couldn’t say what happened that night. They could not see anything in their hiding place and fled without going back into town. Then he smiles shyly and walks towards the unplastered huts that are now his home.

The camp keeps growing. Many of the houses in which the Ethiopians now live have no roof, windows and doors. Often more than 20 people live in a four by four meter room. At lunchtime it is up to 43 degrees Celsius and there are no trees in the part of the village where the refugees live. Sewage runs through the camp, rubbish lies around in large mountains. The smell of excrement hangs in the air. Small windpants carry sand across the paths.

Many of the refugees are therefore already looking for a way to travel on to Khartoum in order to get from there to Libya and thus to the Mediterranean. Refugees say that people smuggling is already flourishing and that the Sudanese army is involved. Others set up and help.

“Lots of people are dying. It’s genocide”
“The world needs to know what’s going on in Tigray. Many people die. It’s genocide. There is no more food. The people have run out of money, the banks are closed, we need water and medicine. We need help so that it doesn’t turn out like Syria, like Yemen. Like Darfur. ”That’s what Arradom Mangesha says.
He stands in an unplastered gray concrete hut that they have converted into a clinic. He comes from the Tigrin city of Humera, where he was a doctor in the local hospital. Until the city was bombed. Now he and a few colleagues who fled with him are looking after the people in the camp.

They help up to 500 people a day, help with malaria and parasites. Above all, however, the people need psychological help, says the doctor. Many people would have had to watch how militias slaughtered people with knives, how they raped women. And how they looted.

They couldn’t go back. “Our land is now occupied by the Amhara.” The world must help them, he says again. Because Ethiopia is falling apart.

Also world champion in giant slalom – Gut-Behrami conjures up and...

“A bit like Berghain”: Robbie Williams is planning a gallery with...