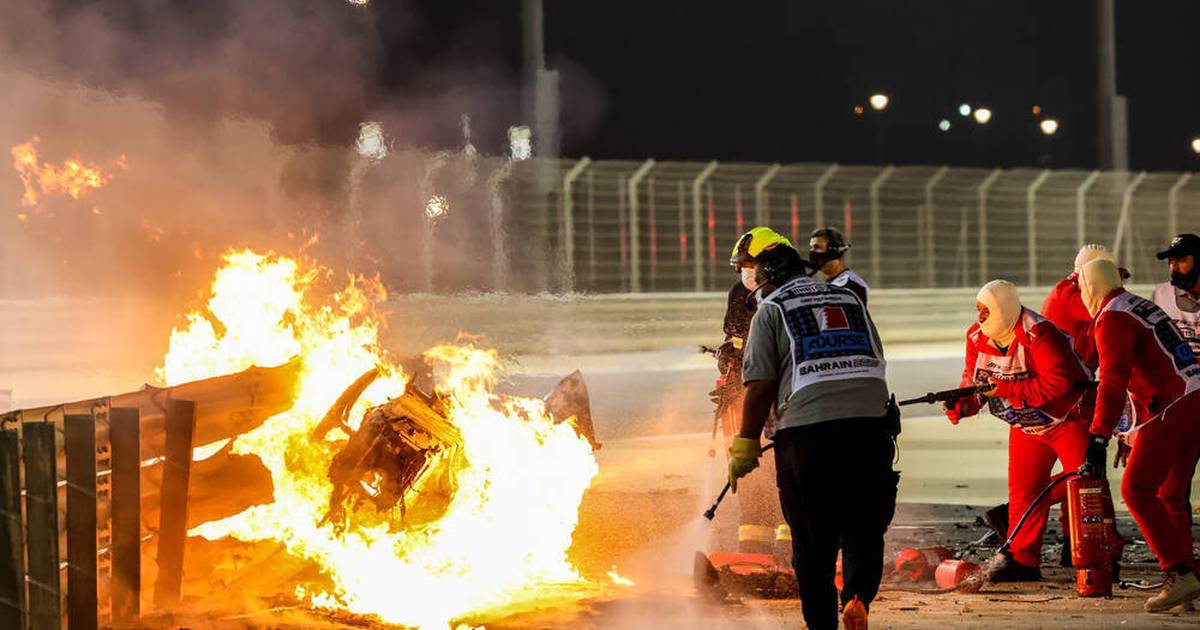 Niki Lauda’s fire accident in 1976 at the Nürburgring is one of the most famous accidents in Formula 1 history. Probably also because the Austrian survived the accident.

His burns on his face became a symbol of the Formula 1 era at that time. As world champion, Lauda united the glorious sides of the sport as well as the dangerous.

Four drivers were not so lucky and died in Formula 1 races because their cars went up in flames: Stuart Lewis-Evans at the 1958 Morocco GP, Lorenzo Bandini at the 1967 Monaco GP, Jo Schlesser at the 1968 French GP or Roger Williamson at the 1973 Dutch Grand Prix.

Ronnie Peterson would have survived his fire accident in 1978, but died in hospital from an embolism.

Since then, various safety measures have ensured that fire accidents in Formula 1 no longer occur. Actually. Until the Bahrain GP.

But Romain Grosjean’s terrible crash shows that all efforts, including making the drivers’ racing overalls more and more fireproof, are not in vain.

The racing suits are made from a fireproof material called Nomex. In them, the racing drivers can survive temperatures of up to 840 degrees for 35 seconds. It took Grosjean 27 seconds to free himself from the glowing hell.

Driver protected from gases and acids

Not only overalls, but also shoes, underwear, gloves and face masks are now made from the special synthetic fiber.

This not only protects drivers from the fire itself, but also from aggressive gases and acids. This is not unimportant, especially with the modern Formula 1 racers. Thanks to the hybrid elements, batteries with toxic materials are also on board.

A racing suit costs 1200 euros, weighs 1.9 kilograms and has to withstand a fire of 820 degrees for ten seconds in advance. That also saved Grosjean, although the Frenchman lost a shoe in his crash.

“He gets out without a shoe, that means his feet should have penetrated the pedal box when he gets out. When he gets out he basically takes off his shoe himself. That is not a big problem. But of course the shoe also protects against fire. Hence the burns at the ankle “, explained Alexander Wurz his assumption ORF.

But it’s not just the racing suits that are safer. Today’s cars are also made of carbon fiber and no longer made of easily inflammable magnesium alloys.

The fact that Grosjean was not beheaded when it hit the guardrail is thanks to the HALO cockpit protection, which was introduced in 2018 and initially received a lot of criticism.

The titanium bar, which is built in Büren near Paderborn, has to withstand forces of twelve tons from above, 4.7 tons from the front and 9.5 tons from the side. The roll bar on the airbox is now designed for a load of 27 tons.

The safety cell, the so-called monocoque, consists of a Kevlar-carbon composite and is loaded with 20 tons from the front and 25 tons from the side during the crash test.

“It’s our bulletproof vest,” said former world champion Nico Rosberg once. The wheels are also attached to the monocoque with three Kevlar straps.

By the way: The Halo cockpit bar was also introduced because of Jules Bianchi’s accident in Suzuka in 2014.

Today his mother wrote to a French journalist: “You introduced Halo after my son died, today he saved Romain’s life. It makes me happy.”

This is how Formula 1 improved safety over the years:

1970: For safety reasons, fans now have to stand at least three meters from the track. A separating wall will be mandatory between the track and the pit lane.

1971: In the event of a fire, drivers must be able to leave the cockpit within five seconds (being tested).

Fireproof clothing only became compulsory in 1975

1972: The six-point seat belt becomes compulsory so that drivers do not skid out of the car when they roll over – two years after Jochen Rindt’s accident.

1979: The cockpit openings are enlarged so that it is easier to get out of the car in an emergency. Some drivers are competing in five-layer, fireproof overalls for the first time, including Niki Lauda.

1981: The carbon fiber monocoque is established and the foot area is added.

1985: First crash tests for the front section of the racing car are included in the regulations. From 1988 such load-bearing tests are also available for the entire monocoque. Over the years, the rules have been tightened and extended to other components.

1992: For the first time, the use of the safety car is precisely regulated. Before that, it was only used sporadically.

1994: After the death of Ayrton Senna, who had an accident in Imola, 27 corners are defused on various courses in the current season.

1995: Side crash tests are introduced.

1997: Every car must now have an accident data recorder on board. In addition, the rear end has to withstand impact tests.

1999: To prevent tires from becoming a deadly projectile in an accident, they have to be attached to the cockpit with tethers.

2000: The impact speed in the front crash test increases from 13 to 14 meters per second. The carbon fiber walls of the cockpit must be at least 3.5 millimeters thick.

In 2001 the cockpit walls were raised.

2003: The Head-and-Neck-Support-System (HANS) is introduced, it stabilizes and protects the head and neck of the driver in the event of an accident.

2005: The protective cushions in the cockpit are reinforced. The retaining ropes of the tires now have to withstand forces of up to six tons. Front wings and other aerodynamic components can no longer be made of any material. Extra-hard Kevlar is a must.

2006: For the first time experiments are carried out with Tecpro barriers as route limits. The plastic blocks absorb 40% more energy than conventional tire stacks.

2011: Helmets now have to have a Zylon tape over the visor to protect the driver from flying parts.

2016: After Jules Bianchi’s fatal crash with an excavator in Suzuka, the virtual SafetyCar phase is introduced.

2018: Halo cockpit protection becomes compulsory, three instead of two tethers made of Kevlar on the tires.

Escape from Honduras – migrant caravan on the way to the USA – around 9,000 people – News

Who is showing / broadcasting the men’s slalom in Flachau today live on TV and live stream?

Return to Russia: Why Navalny is threatened with arrest

New York: man shoots himself in front of church in Manhattan...

“Did it already then”: BVB boss reveals details of the Terzic...

The latest on the corona crisis – Zurich trade criticizes measures...