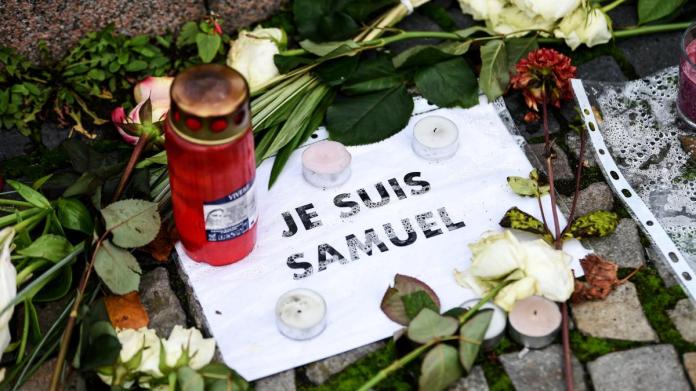 Three students accused of murdering a teacher near Paris

The French judiciary accuses three students of “complicity in the terrorist murder” of Samuel Paty. They are only 13 and 14 years old. Another student of Patys is accused of “false accusations”.

Rand six weeks after the French teacher Samuel Paty was beheaded by an alleged Islamist, several students were accused of complicity. The judiciary accuses three young people of “aiding and abetting a terrorist murder”, as investigators said on Thursday. The 13 and 14 year olds are said to have shown the perpetrator to the teacher in front of the school near Paris.

A student of Patys is also accused of “false accusations” after he showed Muhammad cartoons in an hour on freedom of expression, in which she did not take part. Her father, who was in custody, then published several Internet videos in which he accused the educator of “discriminating” against Muslims. In addition, the father is said to have been in contact with the perpetrator before the murder.

The 47-year-old Paty was beheaded on October 16 near his school in the Paris suburb of Conflans-Sainte-Honorine by an 18-year-old Russian of Chechen origin. The attack caused horror across France. President Emmanuel Macron then defended the showing of Mohammed cartoons.

Macron’s remarks caused outrage in the Arab world. There were protests and calls for a boycott against France in several Muslim countries. Turkish President Recep Tayyip Erdogan accused Macron of Islamophobia and advised the president to have his “state of mind examined”.

Hackers also attacked dozens of websites and covered them with Islamist propaganda. Messages such as “Victory for Mohammed, Victory for Islam and Death for France” were displayed on websites of pensioners’ associations, companies or small town halls. In addition, a montage of pictures by French President Emmanuel Macron was posted showing him as a pig.

Disney-Pixar Christmas film: Soul No. 22 is a tough case

“How crazy are we?”: Kusterer calls for more border controls |...

“The Bachelorette” 2020: That is why Melissa Stuttgart could soon turn...