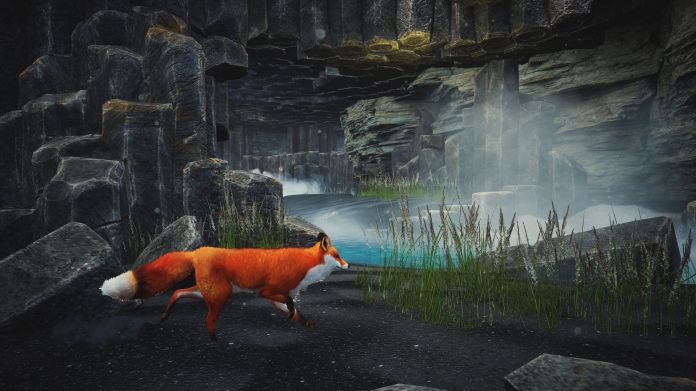 The mystical journey of a fox through a beautiful and enigmatic land can now also be experienced on PlayStation 5. And that’s fantastically beautiful.

“Spirit of the North”, the developer of the developer Infuse Studio and the publisher Merge Games, already knew how to please Nintendo Switch, PC and PlayStation 4. Now the puzzle adventure is daring the leap to the new generation of consoles, namely the PlayStation 5. Anyone who has already gambled “Abzu”, “Journey”, “Ico” or “The Pathless” knows roughly what to expect: Puzzles, platformer passages and a story that is not served in every detail.

“Spirit of the North” decelerates while playing: There are not hundreds of goals and side missions, dozens of characters or thousands of fights. Instead, we steer a fox in the third-person perspective through a landscape of ice, snow, water and rocks and occasionally meet a ghostly conspecific. On our journey we also come across skeletons that can be made possible the journey to the afterlife with found sticks. There are no fights and items, and no other tasks or events are waiting.

Sounds boring? Not even close!

“Spirit of the North” is one of the few games that really only focuses on discovery and not on completing long series of quests. As a success you can work out new coat colors, but that was it with the collecting mania. There are also some puzzle passages in which doors are to be opened, balls moved or switches to be thrown. So that you can operate the mechanisms, you have to stop at flowers in the game world in an unspectacular way.

In short: if you are looking for a game to switch off and relax, you will find it here. Aside from the not-too-demanding puzzles and the apparently vicious red tendrils in the game world, our only aim is to explore the world and get to a mountain in the middle of the game world. At the beginning in particular, this happens in no time at all, but with the increase in Fuchs’ skills, the puzzles also get a little crisper. At first you only have the movement, later you have the energy to operate mechanisms and finally you also have the gift of leaving your own body.

In the previous versions, “Spirit of the North” had a few shortcomings: Although the fox figure was nicely modeled, the game world itself was rather roughly designed and had little effect. In addition, the fox was difficult to control, especially when jumping and sliding. The new “Enhanced Edition”, as the edition for the PS5 is now called, does away with this. In the deep snow our fox now leaves beautifully visible traces, mountains and sky shine in new light effects and in 4K at 60 frames per second and our fox now moves more realistically and easily controllable.

You can’t expect high-end graphics, but the Opti is still admirable for an indie title. There are also two exclusive fox skins as decorative designs. What was already awesome in the current-gen versions: The orchestral choir is a perfect background for the adventure. Nevertheless, there are still some shortcomings to report. First of all, the adventure is quite short with six to eight hours when you play it for the first time and then offers no incentive to play it repeatedly.

In addition, there is the poverty of story elements, actually a trademark of this game, but which is almost exclusively limited to murals that can be interpreted. By the way, there is no “game over”, which saves frustration in the somewhat tricky jump passages. But what is a bit strange: Although the game world is open, sometimes you stand in front of an invisible wall and just get stuck. The developers could have remedied this with artificial boundaries such as rock walls, gorges and the like.

Overall, the game doesn’t quite reach the quality of its great role models, but it is definitely worth a look for fans of the genre. The puzzles are pleasing without major logic errors, the environment looks really good in many areas and the simple gameplay ensures relaxation. Anyone who wants to sit back and simply explore a mystical world without constantly encountering dangers and fights or countless collectibles can now relax on the new PlayStation 5 with the “Spirit of the North Enhanced Edition”.

This is how returnees trick quarantine – readers

Electricity and cooling don’t go well together. But there are...

How German banks want to reach Generation Z on TikTok

Before the end of the term – Trump pardons his ex-election...