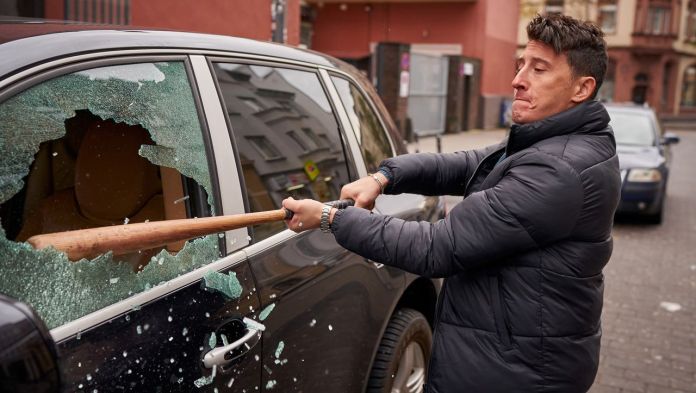 The Calabrian mountain village is bathed in the glowing red evening sun. If you dine in the trattoria of the German-Calabrian small family Modica, you will see this mountain village in the form of a huge photo wallpaper. It looks less picturesque around the trattoria, it is located on the outskirts of Dortmund, between arterial roads that lead to motorways that can be used to quickly get to the Benelux countries or Berlin. Gray Ruhrpott periphery. Calabria seems far away.
Once a month an Italian truck brings canned tomatoes from home, and part of the load is then usually reloaded straight away. Apparently, people in Belgium and Berlin love the Calabrian tomatoes. Or what is still transported in the cans. When the next load is being unloaded, a stenz with a dragon hairstyle climbs out from behind the can pallets, which is supposed to cook at the Modicas from now on. There was probably trouble at home.

The young Calabrian (Emiliano De Martino), despite his quick-tempered nature, is only nicknamed “Pippo” by everyone, and confuses the little world of the restaurateur family. He tries to drag the man (Beniamino Brogi) into protection money shops; he drives the woman (Antje Traue) into the arms of the police, who promise her a leniency program if she testifies against her husband’s friends.

Which family is more powerful? The small German-Italian mother-father-child unit or the Calabrian clan? Sure, a rhetorical question. The situation escalates, loyalties are negotiated down to the last consequences. Soon the photo wallpaper seems to catch fire with the blood-red sunrise. Calabria is close.

This “crime scene” is the first part of a double episode from Dortmund and Munich with which ARD is celebrating the series’ fiftieth anniversary. It’s about the activities of the ‘Ndrangheta, the octopus-like Calabrian mafia, in Germany. The script for both parts comes from Bernd Lange (»Das Disappearance«), but these were staged with different tones and perspectives by two different directors (please read the large double interview on the anniversary »crime scene« here).

Part of the global ‘Ndrangheta logistics

The first part of “In der Familie” was written by Dominik Graf, who approaches the material from the fringes of crime: from the rustic Modicas trattoria that the small family was able to set up with a little financial support from their uncles from Italy and where she now serves spaghetti carbonara for six euros. The lowest German middle class, so to speak – but which is an important part of the global logistics of ‘Ndrangheta.

Director Graf, who filmed a masterful series on the Russian mafia in Berlin ten years ago with “In the Face of the Crime”, has dispensed with any mafia exaggeration. Here no sponsors make offers that cannot be refused, here nobody’s hand is kissed; Instead, a rather faceless, archaic field of activity is put into the picture, in which powers and dependencies are subliminal but sustainable.

There is nothing glamorous about clan crime in this “crime scene”. Especially not the police officers who fight them. The investigators have positioned themselves in a ripped-off camper van in order to track down the transactions behind the canned tomatoes. Soon the team around Dortmund inspectors Faber and Bönisch (Jörg Hartmann and Anna Schudt) will be romping around on three or four square meters with that of the Munich inspectors Batic and Leitmayr (Miroslav Nemec and Udo Wachtveitl), who are also on the ‘Ndrangheta.

Far too much effort for a petty criminal like Pippo, who soon after his arrival distributes greetings from Calabria with a baseball bat in order to set up a small protection money company on his own account? Not exactly. Writer Lange and director Graf make it clear how the shabby outposts of the ‘Ndrangheta are related to its international empire. There is talk of 44 billion euros in annual sales made by the Calabrian mafia.

Commissioner carousel: an overview of all “crime scene” teams

The Italian journalist Roberto Saviano has compiled similar figures in “Zero Zero Zero”, a dossier on the worldwide profit chains and distribution channels of cocaine. The series implementation of the book, which can currently still be seen on Sky, also traced the new supply chains across the sub-Saharan region, which keep narcocapitalism going despite ever tighter global police control measures.

The Modicas pizzeria in the »Tatort« is a small but important part of this system. How difficult it is to blow up is shown in this somewhat different clan thriller, above all, in the insurmountable intertwining of family and business. In order to portray them, Graf finds such disturbing and cruel images as one has seldom seen in a television thriller. Cause of death: family.

Petrol and diesel are on average seven cents more expensive

End of season! Gregor Schlierenzauer injured in the cruciate ligament...

Hartberg continues its successful run and catapults itself into the top...