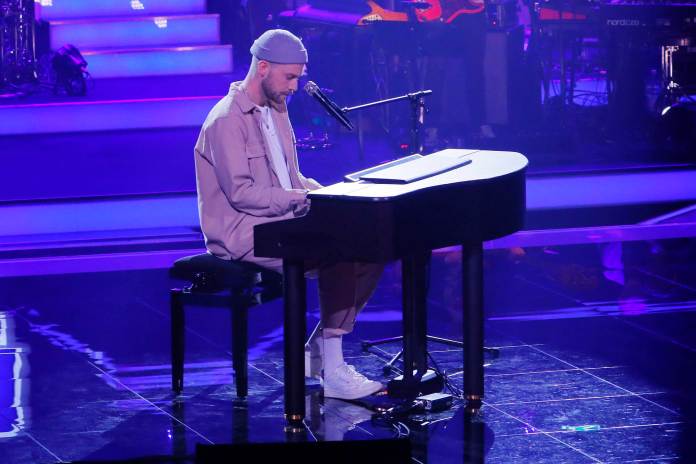 Complaints about high background noise in the Enzkreis

Königsbach-Stein / Karlsruhe / Berlin. “I haven’t quite realized it yet,” said Alessandro Pola, summarizing his personal rollercoaster ride at the “Sing Offs” of “The Voice of Germany”, which really couldn’t have been more exciting. Actually already eliminated, the teacher from the Willy-Brandt-Realschule in Königsbach-Stein made it through detours to the semi-finals of the casting show on Sunday.

For the Karlsruhe resident it initially looked like a march through to the live shows. In the meanwhile accustomed manner, he delivered again on his third appearance in the Berlin Adlershof studio and once again delighted the jury and audience with his version of James Bay’s “Hold back the river”, in which he accompanied himself on the piano (the show was already recorded in summer) equally.

“That was great, super cool. For me personally, that was the best performance today. I believed every word. Unbelievable,” said co-juror Samu Haber in raptures. After the 30-year-old had dedicated his appearance in the “Battles” to his wife, this time he sang for his grandfather.

But not only Haber was blown away, Pola’s coaches Yvonne Catterfeld and Stefanie Kloß were also full of praise. “You blew everyone here and touched them. You said in the ‘Blind Auditions’ that you wanted to be heard. Now you were,” was the conclusion of the female duo, which consequently gave them one of the two places on the so-called “Hot Seats “gave.

In the “Sing Offs”, eleven talents per team fight for one of only two places for the semi-finals. Little by little, every singer appears before the jury, whoever knows how to convince, displaces another candidate and is allowed to take a seat on the “hot seats”. There the hobby DJ and singer of a cover band sat next to fellow candidate Noah Sam Honegger until the appearance of his last opponent Juan Geck.

From the gut, Yvonne Catterfeld finally decided to let him go after she had left him three years ago in the “Sing Offs”. So the question remained who would take second place in the semi-finals. “We know that you are going your own way and that you are an artist and that we don’t have to worry about you,” Catterfeld and Kloß justified their decision against Pola and in favor of going to live shows with Geck and Honegger.

When the teacher for music and English just crept off the stage, visibly disappointed, online coach Michael Schulte stepped in. As in the previous rounds, the third-placed winner of the second season and Eurovision Song Contest participant from 2018 was able to bring two of the talents that had actually already been eliminated to his team.

“There are so many good people. But somehow I have the feeling that Alessandro is maybe that little bit better than the others I have already let through,” he said. Pola was still not automatically in the live shows. To do this, he first had to beat Keye Katcher on the “Comeback Stage”. In two duels, a talent who actually failed in the “Sing Offs” competes against one of the two winners from the second phase.

He finally made it to the semi-finals with his interpretation of Gnarls Barckley’s hit “Crazy”. “He deserves it, he’s a mega singer. I think you can win ‘The Voice of Germany 2020’ with him,” said Schulte enthusiastically. But before that happens, the semi-finals on December 13th are on the agenda.

Is Donald Trump a victim of the “Cancel Culture”?

Because of corona mutation: Mega traffic jam of trucks in the...