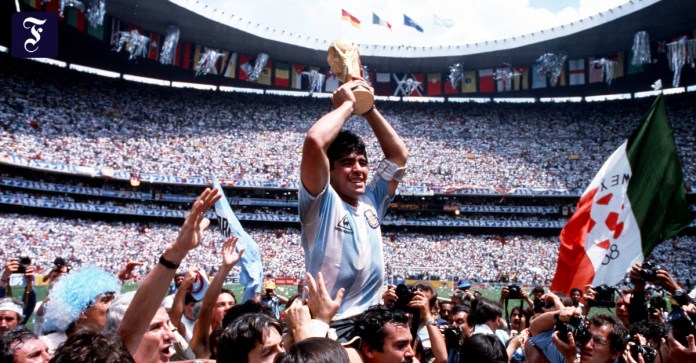 HDiego Maradona has played numerous games for his clubs since 1976, scoring many goals. The 1986 world champion also played 91 games for the Argentine national team and scored 34 times. Some games are milestones in an incredible career. A look back at the ten most important duels with Diego Armando Maradona.

“That day I touched the sky with my hands,” Maradona says later. “Dieguito”, who previously juggled balls and oranges during the break with the Juniors, is just 15 years old on his professional debut. Right at the beginning, the carefree curly head tunnels his opponent and gets an “Ole!” From the audience. Three weeks later, Maradona scored his first goals against San Lorenzo.

Maradona was still too young for the 1978 World Cup in his own country, a year later he triumphs for the juniors. In the final, the 18-year-old made it all clear with a free-kick goal and was then voted the best player of the tournament. “One of the most beautiful moments in my life,” says Maradona. Another reward: The teenager does not have to do military service in his home country because he has won the title.

Maradona made a gala appearance against Hungary and scored his first World Cup goals: first with a diving header, then with a heavy left-footed shot. But two weeks later the World Cup is over after a 3-1 draw against Brazil, and Maradona sees the red card after a kick. Maradona: “Everyone thought it would be my World Cup. I actually do too. “

In his last game for Barca, Maradona went nuts. Only eight months earlier, Andoni Goikoetxea, the “butcher of Bilbao”, brutally broke the leg of the dribble king. When they meet again, there is a wild fight on the field. “I gave kicks on all sides. Luckily the other guys came to my aid, otherwise they would have knocked me out, ”says Maradona. The game was lost, Maradona moves on to Naples.

A game for the ages. First the “Hand of God”, then perhaps the most incredible solo in football history. “I had the feeling that I was stealing the wallet of the British, right after the Falklands War,” says Maradona. Just for the description of the 2-0 Maradona needs over one page in his biography. His sober and true conclusion: “I had scored the goal of my life.”

In the final, Maradona is canceled by Lothar Matthäus, but initiates the 3: 2 with a brilliant pass. “Toni, hold the ball,” calls out commentator Rolf Kramer after Jorge Burruchaga had appeared free in front of goalkeeper Schumacher – in vain. Maradona: “That was the climax, the most glamorous moment of my career. This date, this place are burned into my skin. “

“Lavatevi! Wash yourselves! “, The fans from the rich northern Italy regularly call out to the Neapolitans. Maradona answers in his own way: In Udine he hits twice, first with a penalty, then with the left from an acute angle. Three months later, Naples is sensational champions. “Getting the first Scudetto in 60 years for Naples was an incomparable victory for me. Unlike any other success, even the 1986 World Cup. “

“I was longing for an international title,” says Maradona of his time in Italy. In 1989 the dream came true. Even at 2-1 in Naples, the Argentine becomes a hero, scores a goal and puts on the winning goal shortly before the end. Two weeks later he leads Napoli to the title in Stuttgart: He does the preparatory work both in the 1-1 draw from Ciro Ferrara and the 2-1 draw from Careca.

The constellation is curious: Maradona plays in the World Cup semi-finals against Italy, and that in “his” Naples. The Neapolitans, otherwise mocked in their own country, are divided. “Diego in our hearts, Italy in our chants,” reads a banner. In the end, the guests win very tightly, Maradona’s goal on penalties is also cheered by some Italians. Five days later, Diego cries bitter tears after the 0: 1 against Germany.

Maradona’s career in the national jersey ended suddenly and scandalously. Argentina had just won 2-1 in the United States against Nigeria when a nurse took the celebrating superstar by the hand and brought it to the doping test. The result: ephedrine in the blood, suspension for 15 months. “The small fat one led me to the execution,” wrote Argentina’s football legend later.

94-year-old drives at full throttle in the cemetery hall

Epic Store, PSPlus and Co: These games are available for free...

Covid-19 and taxes – questions and answers about home office, wage...

Rumors about Dardai and Rangnick: The “Big City Club” collapses with...