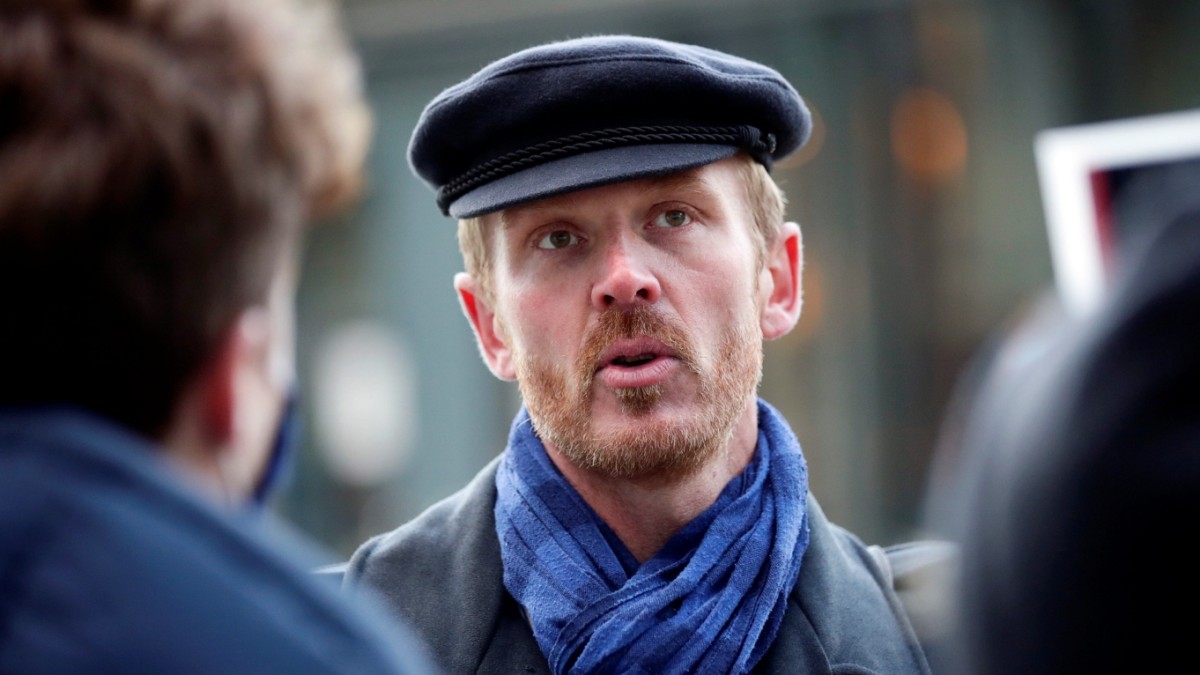 On Friday morning, a 16-year-old student walks into room B 275 of the Munich Regional Court. She takes a seat on the stand and says what needs to be said in this extraordinary trial. That she and other schoolmates visited the Dachau Concentration Camp Memorial in February 2019 as part of a seminar, the place where the Nazis killed more than 41,500 people. That the defendants, Nikolai Nerling and his cameraman, approached the group. That Nerling, who made a name for himself as the “people’s teacher” in Germany’s right-wing extremist scene, said to them: “We shouldn’t believe everything that is told to us here.” Judge Johannes Feneberg asks how she interpreted this statement at the time. The student replies that Nerling alluded to the Nazi era. “I interpreted it as a slander of the Holocaust, even if the word Holocaust was never mentioned.”

It is the testimony of 16- and 17-year-olds who will decide this trial against one of the most famous right-wing extremists in Germany many hours later on Friday evening. At 10:07 p.m. those present rose in room B 275 and judge Johannes Feneberg announced the verdict. The Munich Regional Court sentenced the right-wing extremist video blogger Nikolai Nerling to a fine of 6000 euros (150 daily rates) for sedition. Judge Feneberg found Nerling guilty of denying the Holocaust to the group of students when he visited the Dachau concentration camp memorial in February 2019. Nerling normally knows how to move at the limit of what can be said, says Feneberg. “In this case, he didn’t know.” Nerling told the students not to believe everything that was said. Given the location and the circumstances, it is clear that what one should not believe relates to the Holocaust. In addition, Nerling intimidated the students with his behavior at the memorial. The verdict is not yet legally binding. Nerling has announced on his Telegram channel that he is going into revision.

The appeal proceedings against Nerling and his cameraman lasted into the late evening hours on both days of the hearing. On the one hand because of the constant breaks in which the judicial officers open the windows so that the aerosols in the hall can evaporate. On the other hand, because the court gives the defense lawyers a lot of time when questioning the witnesses and responds meticulously to some applications. It is an attempt not to commit procedural errors, at least in this process. Legally, this negotiation moves in a sensitive area anyway.

After all, the facts are undisputed: Nerling and his cameraman came to Dachau in February 2019 to film against the alleged “guilt cult”. He was recognized by a speaker at the memorial who was about to lead a school class across the site. She had previously observed him at a right-wing extremist demonstration in Bielefeld, which she reported on as a journalist. She then alerted the administration of the facility and had to leave the group of students alone for a moment.

Meanwhile, Nerling slammed the gate of the former concentration camp with the cynical inscription “Work makes you free” and called to the students behind it that they were now locked up. A disrespect and mockery not only of the more than 41,500 people who killed the Nazis in the Dachau concentration camp, but also of all other victims of National Socialism.

Several students burden Nerling heavily in the negotiation. They report that Nerling told them not to believe everything that was told to them in the concentration camp memorial. A 16-year-old even said that Nerling said to them: “We shouldn’t allow ourselves to be manipulated here because most of what happened here is nonsense anyway.” According to the students, Nerling never used the words “Holocaust”, “Shoah” or “gas chambers”, nor did he give specific numbers of victims. But several young people state in their testimony that they interpreted the statements as if Nerling were referring to the crimes of National Socialism and especially in the concentration camps.

It is the classic method of Nikolai Nerling and other right-wing extremists: In public they crawl along the limits of what can be said. They make allusions, name key words, ask suggestive questions or give a stage to deniers of the Shoah. You yourself do not explicitly deny the Holocaust because it would be a criminal offense. But your audience knows exactly what is meant.

The trial before the regional court revolves around the question of whether Nerling’s concealment statements are legally to be seen as sedition and thus as denial of the Holocaust, even if he does not explicitly say words like “Holocaust” or “Shoah”. The District Court of Dachau answered this question in the affirmative in December 2019 and sentenced him to a fine of 10,800 euros for trespassing. Nerling’s cameraman was also found guilty of aiding and abetting sedition in Dachau. Nerling took legal action against the judgment.

In the appeal proceedings, the defendants’ lawyers hold long pleadings, in which they primarily present the ruling of the Dachau district court as unlawful. This is a “punishment for the attitudes of my client,” says Nerling’s lawyer. The defenders speak of a “political process”. The media had set off a “wave of outrage” and thus built up public pressure on the courts, which therefore couldn’t help but condemn their clients. “We are not doing conviction criminal law here,” Feneberg countered them later. They are conspiracy myths that are said to resonate primarily in the echo chambers that Nerling serves with his videos. The lawyers plead for acquittal. In contrast, the public prosecutor is demanding a six-month prison sentence for Nerling. “Dachau is the second most famous concentration camp after Auschwitz. It is a symbol of the Holocaust itself,” he says. It is difficult to understand Nerling’s statements to the students differently.

An important criminal complaint is missing

Finally, Nerling is sentenced to a fine for sedition, which is less than the verdict of the district court. In the appeal proceedings, the regional court follows the Dachau district court only to a limited extent. Nerling is still guilty of having denied the Holocaust with his statements to the students. But it speaks him free of the charge of trespassing. The background to this raises a number of questions that must be answered in the next few weeks. The memorial had reported Nerling and his cameraman to the Dachau police for trespassing in February 2019. But the memorial’s complaint against Nerling has disappeared. Only the criminal complaint against Nerling’s cameraman remains.

The policewoman who was on duty at the time said in court: “I am 100 percent sure that both applications were made.” How it can be that a criminal complaint does not reach the files, she could not explain. But this statement is not enough for the court under Chairman Feneberg. “The criminal complaint is not there and we don’t know whether it existed,” says the judge. While Nerling is acquitted of trespassing charges, his cameraman is found guilty. He gets a fine of 1500 euros (50 daily rates). In contrast to the Dachau district court, however, the regional court acquitted him of having assisted in sedition.

Most of the time the accused are silent. You sit behind panes of Plexiglas, listening to what the witnesses testify. But they do not want to comment specifically on the allegations for a long time. They only begin to speak when Feneberg gives them the last word shortly before 8 p.m. The cameraman distances himself from Nerling. He says he has ended his collaboration with the “Volkslehrer”. His work has become too political for him. “My motivation was to make cultural videos,” he says. His voice is trembling. The court does not consider this statement to be convincing. Nerling and his cameraman wanted to film against the “guilt cult”. “It doesn’t become a cultural video just because it contains the word cult,” says Feneberg.

At 7:50 p.m. Nikolai Nerling finally gets his big stage. His voice trembles too. He wanted to do something good for the people with the “anti-guilt cult videos”. “I wanted to make them feel guilty.” Then he talks about his father. This raised him anti-fascist. He thought it wasn’t good to be German. But he understood that he needn’t be ashamed of it. In his final statement, Nerling poses as a fighter for freedom of expression. “It is bad to be right-wing in Germany. When rights speak their minds, they abuse the right to freedom of expression.” People like him would struggle to survive. He just wanted to say to the students: “Question things in general.” At the end of the big “Volkslehrer” show, Nerling recites the Knecht-Ruprecht poem in the courtroom: “From outside, from the forest, I come …” When Nerling has finished his poem, the room is once again thoroughly ventilated.

Corona mutation: Merkel predicts an incidence of over 1600 – “If we don’t make it”

Lockdown until Easter? Three scenarios for April 2021 in Germany

Controversy over children’s rights in the Basic Law | Germany | DW Corona chaos near Cape Verde: Germany keeper Bitter hopes for the game to be canceled at the Handball World Cup

S-Bahn in east Berlin from today with week-long closures