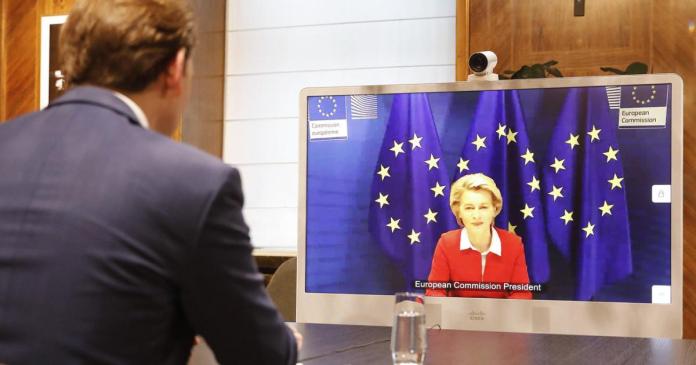 Kurz thanks for the joint procurement of the vaccine by the EU and the EU Commission. It is “wonderful that we can start vaccinating at the turn of the year”.

Hopefully by the summer such a high percentage of the population will be vaccinated that “we will declare the pandemic over and defeat the virus”.

Von der Leyen says: “It was teamwork, that shows the strength of Europe.” She tells how the joint approach came about. At the start of the pandemic, whatever vaccine it made, the US said America first. Von der Leyen: “At first we Europeans thought that as individual countries we would never get anywhere, we could never keep up with the USA in the big pharmaceutical companies. That’s when we joined forces, made ourselves aware of our market power as the EU.”

The EU then took two billion in hand to pre-finance the development of vaccine production. This meant that production could begin as soon as an approved vaccine was available. Von der Leyen: “We invested in advance. We were also able to spread the risk, we built six parallel storylines. We now have the world’s broadest portfolio of vaccines.”

The head of the Commission says that Kurz insisted from the outset that poorer countries in the EU neighborhood that do not have this market power should also benefit from Europe.

The newcomer wants to smooth things over again

Hubble finds out about Planet Nine

Recall due to risk of cancer: Several products contaminated with toxic...