The weather in Germany is getting dangerous. A “cold egg” not only brings snow, but also freezing rain and black ice.

Update from Monday, November 30th, 2020, 12:49 p.m .: One “Cold egg” pulls over Germany away and takes care of the Beginning of winter for the one longed for by many people snow. But that Weather also brings hazards with himself. On Tuesday (December 1st, 2020) there is a threat Traffic chaos. “It’s going to be smooth as hell. Please watch out, ”warns meteorologist Jan Schenk from The Weather Channel. Because the “cold egg” not only brings snow, but also ice rain and Black ice to Germany.

It really starts on Tuesday night: That “Cold egg” unfolds its full effect and ensures in many parts of Germany initially for Black ice and ice rain. That leads to slippery roads that motorist can easily be underestimated because it snows on it a short time later. Those who are out on the streets should be even more careful than usual.

The wintry Weather mainly hits the west of Germany. Im Schwarzwald expect the Meteorologists according to the forecast up to 30 centimeters of fresh snow. This is significantly less in the lowlands. in the Rhine Main Area The German Weather Service (DWD) expects a maximum of five centimeters of fresh snow in Offenbach. “The snow in the lowlands will melt away on Tuesday,” says Schenk.

Update from Sunday, November 29th, 2020, 9.30 a.m .: Also in Winter 2020/2021 many winter fans hope for Weather in Germany one thing in particular: snow. After a meteorologist from the weather service Q.met already had a so-called “Cold egg” announced, now also predicts German Weather Service (DWD) in Offenbach snow For December. Already in the night of Tuesday and thus on time for the first of December could be in the whole Germany – even at lower altitudes – snow will fall.

Weather in Germany in winter: Snow is finally in sight, reports the DWD

While in the mountains with security snow can be expected is the forecast for the east and south of Germany and the lower areas are not entirely certain. Here can Weather also become very uncomfortable and sleet and drizzle have to be expected in the coming days. Due to the falling temperatures there is also increased Danger of slipperiness, again DWD reported.

A little snow view from Monday evening!
On Tuesday morning about 200 m longer white, from RP to HE to TH, South NI & North BY 2 to 8 cm, locally up to 11 cm of fresh snow. White in the evening especially in the south. In the Black Forest as well as individual low mountain ranges 7 to 15 cm, occasionally more./V pic.twitter.com/wIR14s3dSO

Weather in winter in Germany: soon the first snow thanks to “Kälte-Ei”

Update from Friday, November 27th, 2020, 1.59 p.m .: The first snow comes in next week Germany down to the lowlands. Meteorologist Dominik Jung from the weather service Q.met is sure of that, as he told the weather portal wetter.net. Responsible for the icy Weather is that still over Germany lying “Cold egg“. It is still not certain how exactly the weather will develop. But: “It will be exciting from Tuesday. A low is approaching, ”explains Jung. This brings rain, but also snow for the lower elevations.

Weather in Germany: Snow and winter are coming thanks to the “cold egg”

The temperatures will also be as it is Winter heard. By the first Advent (November 29, 2020) they should drop to a maximum of 5 to 7 degrees, during the night it can be as cold as minus 8 degrees in places. Jung is certain: “Those quiet, rotten November days will be over for the time being and the weather will start moving”. One downer, however, remains. Because he will stay where he is snow only from 400 to 500 meters. But those who live at these heights can look forward to the first real winter days.

Weather: “Cold egg” is approaching Germany – Expert: “It will be exciting”

First report from Thursday, November 26th, 2020, 11:19 am: Offenbach – The Winter is one of the most exciting seasons in Germany. Many associate it with snow-covered meadows, To the Euchrist at the windows and children in the garden Snowman to build. However, this scenario rarely occurs Germany also permanently, because the last winters were all too mild. But now there is good news for winter fans: A “Cold egg” rolls towards the country and makes for exciting Weather in Germany.

While the Astronomers the Winter only start on December 21st at the winter solstice, the Meteorologists the beginning of winter is fixed on December 1st. And this year it could be winter too snow and ice begin. Because a “Cold egg” rolls up. But the Weather services still disagree about the exact effects it will have. “It will be exciting,” explains the qualified meteorologist Dominik Jung from the weather service Q.met opposite the weather portal wetter.net.

Weather in Germany: The chance of snow is increasing rapidly

The probability on snow increases rapidly from Wednesday (02.12.2020). Because the “cold egg” pulls over Europe and brings freezing temperatures in 5500 meters altitude. However, the exact trajectory of the High altitude lows still uncertain. What does that mean for that Weather in Germany? The major weather models still disagree on this question. The American Weather Service NOAA sees a maximum of a few wet in the week from November 30th snowflakes. The European weather service ECMWF partially counts Snowfall all the way down and from 300 meters even with temporarily white landscapes.

“The uncertainties are very great next week. The first comes snow or is he not coming? We must the Forecasts watch for a few more days, ”says Jung. For winter friends, the start of the December be a rare exception. Because the forecast for the weather in December in Germany is clear: The month should be milder than the average and with little precipitation. The chances of a white Christmas are therefore not particularly high.

Also the Predictions For January and February winter friends will not like it. Winter is heading for a new record – it will be milder and could even be the warmest Winter since the beginning of the weather recording. (Christian incense) 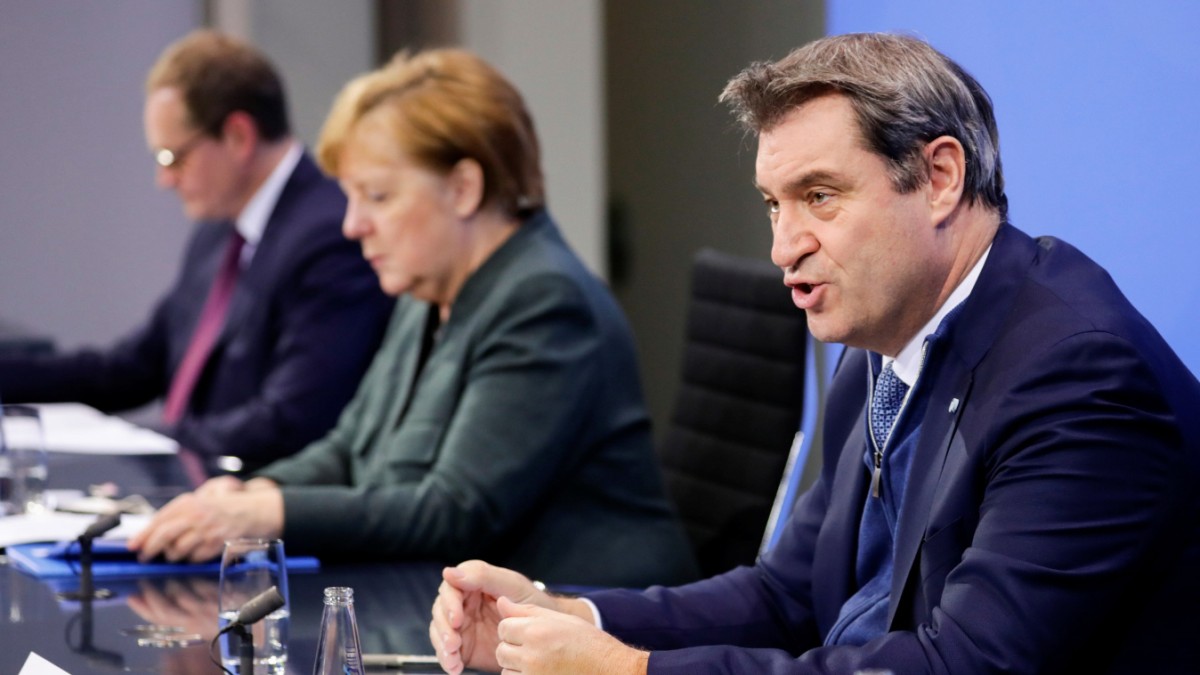 Federal-state switch to Corona: dispute over exit restrictions and school

Corona vaccination calculator calculates your vaccination date: When will I be vaccinated?

Because of Corona: In Germany, 500 million new items of clothing are in danger of being destroyed

10,000 teddy bears from Diekholzen comfort sick children all over Germany

Lockdown is extended: Driven by the mutant

Death of Maradona: As if an earthquake had shaken the country...

Keith Richards as a gardener? How musicians sweeten the Corona...

Olivia and Harry dating: did ex Jason Sudeikis know about it?

Justin Timberlake reveals the name of his second son from Jessica...

The latest on the corona crisis – Largest virus outbreak in...