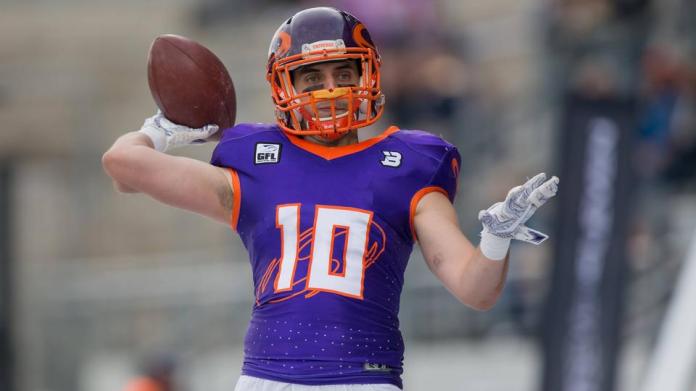 In Frankfurt two teams want to offer high-quality football in the coming year – but in different leagues. There will also be changes for all fans of the Universe. We answer the most important questions.

When it comes to football, Frankfurt Universe has been the top dog in Hessen’s metropolis for years. But that will change in 2021. After a split there should be another team, who is still looking for a new name and then wants to compete in the newly founded European League of Football (ELF) – and will therefore also be in competition with the Universe.

What does Frankfurt Universe think of the new ELF team?

After saying goodbye to managing director Alexander Korosek, who is now taking care of the fortunes of the new ELF club, the AFC Universe Frankfurt club was initially shocked. The news of the new competitor provoked a divided echo, as the chairman Alexander Landsiedel explains in an interview with the hr-sport.

“We have three groups. The first group sees this relatively critically. The second finds the development exciting and is for more professionalism in football in Frankfurt. And the third group reacts wait and see, after all, it will take a while before the new season should start, “says Landsiedel.

What are the Universe’s plans now?

The goal is clear: Frankfurt Universe would like to compete in the German Football League (GFL) as in previous years. This is the top division in this country hosted by the American Football Association Germany (AFVD). Universe submitted the application, i.e. the license documents, by November 15th.

The deadline had been postponed by a month from mid-October. Landsiedel says there were “clearly gaps in the documents of the Hessians.” “In the Corona situation we are missing a lot of money. The viewer issue is uncertain.” The club is therefore also discussing how the home game events could be “one or two sizes smaller”.

In the end, the decisions are made by the Betriebs-GmbH – also in the sporting area. Because Korosek is taking the previous head coach Thomas Kösling with him to the new ELF team, the now sole managing director of Universe Daniel Zeidler must primarily seek a new coach. He will then put the team together.

Where should the home games of both teams take place?

The tendency: Both the Universe and the ELF team want to play in Frankfurt in the stadium on Bornheimer Hang. After the Frankfurt Galaxy welcomed an average of more than 30,000 fans to the Waldstadion in the 1990s and 2000s, the arena with a capacity of 12,500 on the 661 motorway has established itself as the new home of Frankfurt football. However, the fact that the Universe evades and looks for a new home ground cannot be ruled out.

What does it all mean for the fans?

That is exactly the crucial question. It is completely open how the new ELF team will be accepted, whether football fans will be interested in both clubs in the future and – should the pandemic allow it in the near future – they would buy season tickets for both teams’ home games.

Universe club boss Landsiedel is calm about the new competitive situation anyway. “The competition for players, resources and sponsors is always there,” he says, referring to the high density of top teams: In Bad Homburg, Darmstadt and Wiesbaden as well as with the Frankfurt Pirates, there are other clubs from the region in the GFL2 .

If everything goes well with the ELF team, “as it is propagated, there is certainly strong competition,” said Landsiedel. But: “We offer the established product that has been developed over the years. The other product is the new. And when something new is added, it first has to prove that it works.”

And what else is going on in the GFL?

A total of 14 GFL teams submitted their license documents on time. The Hildesheim Invaders (North Season) and the Ingolstadt Dukes (South Season), however, have announced their withdrawal from the House of Lords. Hildesheim wants to compete in the GFL2, Ingolstadt even in the regional league.

There is now one free seat in both seasons. It is still open whether they will stay free or there will be a replacement procedure. In order to be able to better deal with corona uncertainties when planning the new round, the 2021 season will not start until June.

Blizzard Entertainment confirms that it will continue playing the old save...

DSDS: Nobody expected that!