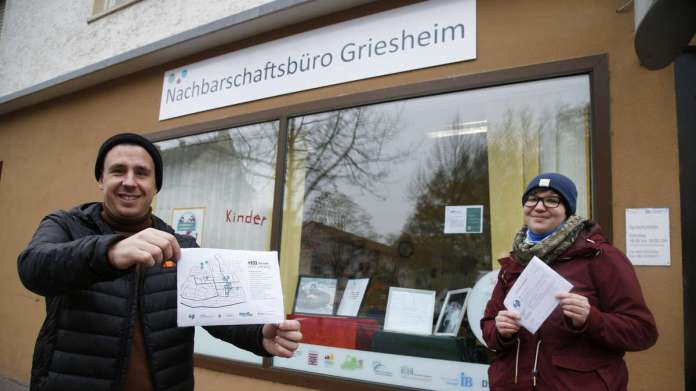 The media coverage of Griesheim is often one-sided and always with an outside view, criticizes Maximilian Förtner. He is the district manager of the IB in the Frankfurt program “Active Neighborhood” and is responsible for the district. With a project of the action alliance “Together in Griesheim”, an amalgamation of several supporters of social facilities and institutions, residents had the opportunity to have their say and to capture their living environment with photos and a quote. The campaign was – based on the zip code – under the motto “# 933.Griesheim. My home”,

The result is an interactive tour of the district, an exhibition, so to speak, that leads to 14 different locations in Griesheim and offers the opportunity to rediscover them. The aim of the campaign is to show how complex it is to look at Griesheim – the familiar and the new are juxtaposed; the perspectives should help to break down prejudices and enable constructive discussions. “The quotes we received and the photos do not necessarily come from the same people,” says Förtner.

Anyone who wanted to could take part anonymously. “To give his name was voluntary,” says the district manager and refers to two quotes. One is from Musa (22), who wants something practical for his environment: “A kiosk would be great!” it says there. The other quote is anonymous and refers to human interaction: The author wants “a respectful, tolerant and appreciative interaction with his fellow human beings”. Currently, 22 photos and quotes can be seen at the 14 locations, including the district library at Schwarzerlenweg 57 or the Kai-Uwe-Gärtner-Haus at Ahornstraße 98. The exhibits were hung there by Förtner and his colleague Friedrike Weyh. The two district managers are also contact persons for the people in the district. The central point of contact is the neighborhood office at Waldschulstraße 17 a, which is also a stage of the interactive district tour.

The show in the district regularly changes its appearance: every six weeks the photos are to be rotated and more will be added. Visitors can give their feedback on the action in small cardboard boxes, which are attached to the locations of the interactive district tour. “There are a total of 50 photographs and 50 quotations, which are also summarized in an illustrated book that will be printed in the coming week,” says Förtner. The book can be purchased for a donation. Part of the project idea was originally also to invite to a discussion event. This had to be omitted because of the corona pandemic. In any case, the show should be on view for as long as possible. “The idea is to bring all the work together in one place at the end and catch up on the discussion,” say Weyh and Förtner, who hope that such a constructive discussion will develop. Alexandra Flieth

Information about the project at https://gemeinsam-in-griesheim.de on the Internet.

“Indiana Jones” Game From Bethesda: What Is Known So Far

Marcel Sabitzer becomes the most expensive Austrian footballer in history

Weather: Official warnings for all of Germany – will Munich escape...