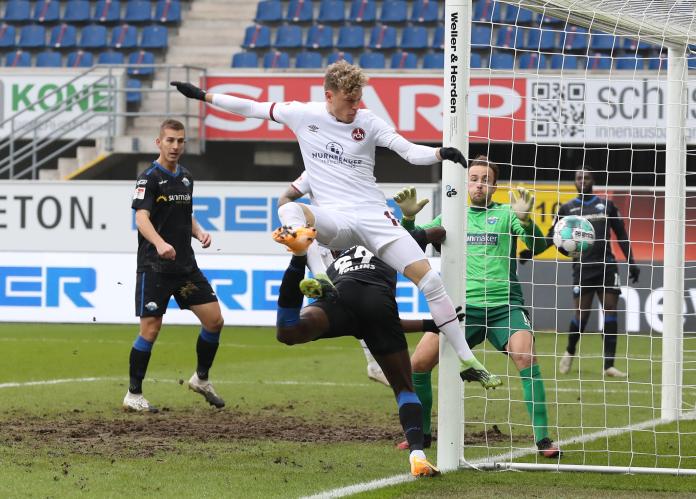 PADERBORN – Something like that is called a successful reaction to a lost derby! The club unexpectedly won 2-0 at SC Paderborn on Sunday and was particularly convincing in terms of fighting. Hack and Lohkemper score the goals for FCN.

With full commitment, Robin Hack maneuvers the ball to the Nuremberg 1-0 into the Paderborn network.
06.12.2020

He has a similarly grandiose interim result 1. FC Nuremberg at most against one or the other district division from the region. Three games, three wins, so popular the statistics before the reunion with SC Paderborn on Sunday not to joke.

After comparing the Bundesliga relegated in 2019 and 2020, that successful streak looks a little more incredible. With 2-0 (1-0), the club prevailed after 90 hard-fought minutes and was able to improve to twelfth place in the table. Hack (8th), who had to be replaced injured in the first half, and the outstanding Lohkemper (49th) scored the goals, each with his head.

Third win of the season! The FCN fights for the Paderborn three

After the defeat in the derby, the goal for the club in Paderborn was not to get into a negative vortex (again). With Nikola Dovedan on the starting grid and a very thinned-out bench, Robert Klauss’s team started at the bottom of the table. Above all combative, which they missed something against Fürth, convinced the Nuremberg team in Oswestfalen. After a turbulent initial phase, they were not only able to maintain their leadership, but even expand it. Here are the best pictures from the Pader!

“We are able to create a lot of scoring opportunities against a top team,” said Robert Klauss afterwards Derby, on Sunday a handful was enough against the next top team. Above all, Klauss had rearranged his substitute bench; For Rhein, Krätschmer and the injured Behrens, young striker Shuranov, youngster Latteier and New Zealand returnees Singh sat on the bench. As expected, she was allowed to leave Dovedan, who slipped into the starting line-up for Nürnberger.

Already in the first few minutes it became clear that the guest was not willing to just stand in the back. In a promising counterattack, Hack missed both a good first contact and shortly afterwards the right moment to use the Schäffler who had run along with him. A little later he made up for his negligence: Lohkemper’s soulful cross from the left pushed the U21 national player over the line with his head, but had to pay dearly for his stake. Colleague Collins pushed him into the gang, Hack only held out until the 39th minute.
The residue seemed to rouse Paderborn; Srbeny hit the post (13th), Schäffler hit the lower edge of the crossbar on the other side just a minute later. Even so, the pressure gradually increased. The VAR conceded the supposed equalization by Vasiliadis due to a handball by Srbeny a good 20 seconds earlier, with luck and skill the guests survived the first real urge phase unscathed.

Only Lohkemper and Schäffler really good: The FCN in Paderborn in the individual review

Against strong Fürth, the Nürnberger often did not get into the duels in the derby. Robert Klauß and his team had apparently worked on that, because the Paderborn was full of fighting. And it was worth it, because the club went home on Sunday with a well-deserved victory. In terms of play, however, there was still something missing, only Lohkemper and Schäffler could really shine. NZ sports editor Uli Digmayer with the individual reviews!

Until the break, the Nuremberg team held the 4-3-3 and therefore extremely aggressive team from coach Baumgart either well away from their own penalty area or carefully defended in the last third of the place. They just didn’t provide enough relief – but did it at the beginning of the second half.

With the head to the second

After a counterattack, Lohkemper extended a Schäffler cross with his head into the far corner, making it 2-0 for the club, which, like in Osnabrück, performed remarkably efficiently in front of the goal. Baumgart had seen enough and reacted a little later with a triple change in order to possibly steer the game in a different direction.
The SC kept running and had the ball more often, but simply didn’t bring any structure to his actions. Nuremberg was compact and did not allow much, more precisely nothing. Someone still somehow got a foot or a head in the way when things got really tough.

Joy in a foreign country! The FCN followed the 4: 1 in Osnabrück on Sunday in Paderborn with the next away win. In a 2-0 win against a strong SCP, the club scores with commitment and efficiency. But how exactly did you see the Klauss protégés? Give your grades to the club boys now!

In terms of fighting, it was really strong, as the club presented itself a week after the lost derby, while a number of wishes remained unfulfilled on the deep floor. That was probably only marginally about on Sunday in Paderborn. Schleusener and Lohkemper (80th) left the 3-0 with a double chance. A pack and a lot of excitement later was over.
When 1. FC Nürnberg actually expanded their perfect record against Paderborn even further.

Samsung monitors: 10 new office screens have a higher resolution than...

Astronomers have made the best pictures of the cosmic network so...