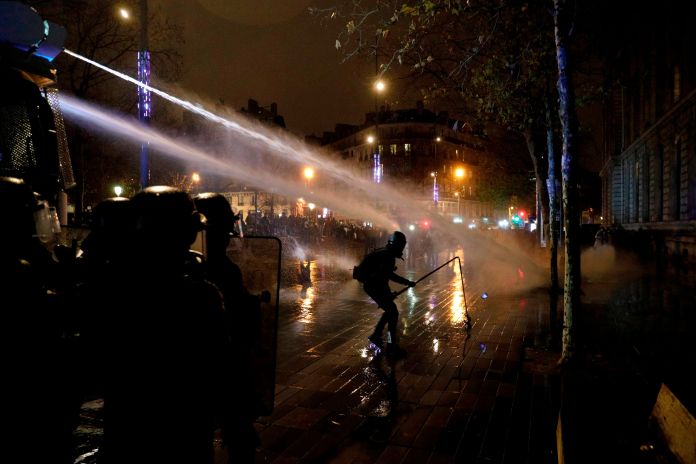 The demonstration continues in Paris. Cars were set on fire again. Several people had to be arrested.

During a demonstration against police violence and the planned security law, riots broke out again in Paris. Cars were set on fire on Saturday afternoon and several shop windows were damaged, as can be seen on TV images. Rioters threw bullets at the police, who used tear gas. According to the police prefecture, 42 people had been arrested in Paris by evening. There were numerous protests all over France – in Toulouse, Bordeaux and Lyon, for example, thousands of people took to the streets largely peacefully. However, it was significantly less than the week before.

The Paris demonstration had initially started peacefully at the Porte des Lilas in the east of the city and moved to the Place de la République. Numerous young people were out on the streets, and trade unions were also represented. The police secured the streets around the demonstration and checked some metro exits, as a dpa reporter reported. On the signs of the demonstrators, for example, addressed to Interior Minister Gérald Darmanin, “Darmanin resigned” or “France: land of police rights”, people chanted “Macron, enough!”.

“The rioters are smashing the country”

After about an hour and a half, riots broke out on the demonstration route on Avenue Gambetta in the 20th arrondissement. According to the media, hundreds of rioters mingled with the demonstrators. A small truck was set on fire, a deep black cloud of smoke hung over the street – numerous cars also went up in flames.

A bank branch was completely dismantled, the windows and the interior badly damaged. Numerous fires were started along the entire demonstration route. By the evening the situation had calmed down.

“The rioters are smashing the country,” criticized Interior Minister Darmanin.

Eight security guards were injured and 64 people were arrested across the country. According to reports, there were isolated clashes in Nantes and other cities. According to the Interior Ministry, more than 52,000 people took to the streets across the country, 5,000 of them in Paris. The organizers usually give significantly higher numbers. Nevertheless, this is far below the mobilization last weekend when, according to the authorities, 46,000 people took to the streets in Paris alone.

Controversial article is being revised

A collective of trade unions, journalist and victim protection associations and human rights organizations called for the nationwide protest against the harshly criticized security law. Cases of police violence had recently made headlines in France. Last week’s Paris demonstration also resulted in massive riots, while tens of thousands demonstrated peacefully.

The government majority announced a few days ago that it would revise the particularly controversial Article 24 of the Security Act, which is intended to restrict the distribution of recordings by police officers. However, the organizations are calling for this passage to be deleted completely. The law also provides for other harshly criticized measures. This includes, above all, the expansion of video surveillance by the police, for example during demonstrations and with the help of drones. According to the government, this is intended to protect the police.

French President Emmanuel Macron announced on Friday that he wanted to set up an online platform at the beginning of next year on which people can report discrimination, for example by the police. Some police unions criticized the plans sharply.

Postponing the Olympics will cost Japan an additional 2.3 billion euros

Corona in Germany: Poverty becomes a deadly danger in the pandemic

Red Bull exit from Formula 1 off the table

“Offer to RTL”: Michael Wendler makes a desperate proposal – and...

That is why Mercedes did not react immediately to Russell’s flat...