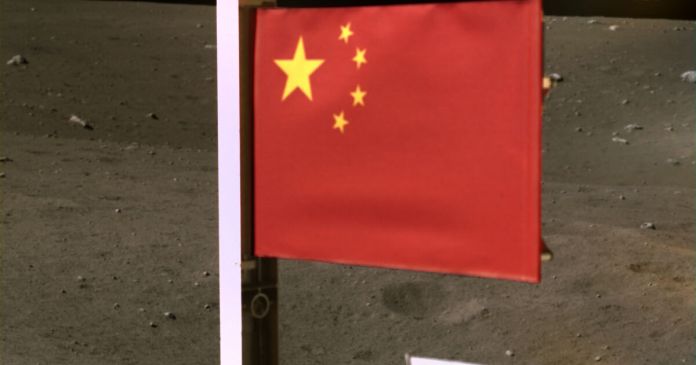 Around two kilograms of lunar rock that are to be returned to earth were then safely stowed in the return capsule.

The maneuver was considered to be one of the most difficult steps on the flight back to Earth. China has already made several rendezvous with its spaceships in orbit, but never before at a distance of 380,000 kilometers. After the manned moon landings in the USA in the 1960s and 1970s, it is also the first time that a docking maneuver without astronauts has been successful in the moon orbit.

China on a moon mission

The moon mission is considered another important step in China’s ambitious space program. The young space travel nation wants to gain experience with which a manned landing on the moon can also succeed in the future. It is the first time in 44 years that rock samples have been collected on the moon and are to be brought back to earth for examination. If the return were successful, China would be only the third nation after the USA and the Soviet Union to have succeeded in such a project.

Researchers are eagerly awaiting the lunar samples, which are younger than any other rock the US and Soviet Union had collected. The investigations could provide new insights into the volcanic activity of the moon. The US Apollo missions brought back around 380 kilograms of lunar rock. The Soviet Union collected around 300 grams with unmanned missions.

In the next step of the Chinese moon flight, the return capsule will separate from the ascent stage and wait for the right time to return to earth, as Xinhua reported. The landing is expected in Inner Mongolia in mid-December.

Legacy of the Apollo flights

China’s moon mission comes 51 years after the USA’s first manned moon landing on July 21, 1969, when Neil Armstrong and Edwin “Buzz” Aldrin were the first people to step on the surface of the satellite. The US has put astronauts on the moon six times. With “Apollo 17” in December 1972 the USA stopped their manned moon landings.

“Chang’e 5” was launched on November 23, Central European Time, from the space station in Wenchang on the southern Chinese island of Hainan. On December 1, the lander touched down in a volcanic area named after the German astronomer Karl Rümker (1788-1862). It lies in the “ocean of storms” in the upper, left-hand part of the earth-facing side of the moon.

IAEA and Iran find interim solution in the nuclear dispute –...

Doubts about China’s will to enlightenment remain

Police officers in Myanmar are stationed in clinics