At the end of the week, in which the EU was only able to come to an agreement with the billion-dollar Corona aid package after a long dispute about its new budget and Great Britain itself wanted to continue haggling over an exit agreement shortly before the epic Brexit final, Jörg Pilawa said on Saturday evening in the German, Austrian and Swiss television were thankfully reminded that Europe can actually be very cute and entertaining.

Or did you know that Finnish passports are particularly forgery-proof because they have a built-in moose flip book? That St. Nicholas in the Netherlands comes especially from Spain by steamboat? And that Switzerland, together with the Vatican, has the only square national flag in the world?

It doesn’t matter, some of Pilawa’s candidates at the premiere of the “Quiz without Borders” in the first one felt the same way. When designing this evening, nobody had to be creative in order to have eight celebrities, representing “their” countries, compete against each other in very uniform guessing rounds: DJ Bobo for Switzerland, Miroslav Nemec for Croatia, Samu Haber for Finland, Markus Lanz for South Tyrol, Kaya Yanar for Turkey, Emilia Schüle for Russia and “Günnipedia” for Germany (whose former production company not only produced the show, but was also allowed to fire the ex-boss afterwards as the winner).

Nevertheless, Pilawa’s umpteenth quiz attempt had pretty much everything that one can expect from such a Saturday evening in December of the exhaustive year 2020, if one does not want to see infection statistics, crowded pedestrian zones and lockdown speculations for three and a half hours: one round good Cheerful celebrities, very cute animals – and the certainty that you will not let yourself be strained by an overly action-packed TV program.

If the partners ARD, ORF and SRF have their way, “Quiz without Borders” could take on the legacy of the show’s forerunners “Spiel für dein Land” and “I know everything”, which should not be continued (in the latter case, because for it Studio audience would be needed, which currently has to concentrate on Advent shopping).

And, admittedly: During prime time there is rarely enough space on German television to recite original Hungarian proverbs, Finnish lullabies and Icelandic wisdom (“There are three things that help against winter depression: jokes, joie de vivre and alcohol”). Ideally, someone might think about such an evening for the continuation still could become a bit more diverse European, in order not to have to guess buildings beamed into the studio by lasers again afterwards.

Even as a sign of European cohesion, it is not wrong to put on the always festive Eurovision fanfare before such a show to convey to the audience that they are sharing their momentum with the European neighborhood.

Last week I asked the broadcasters what significance Eurovision shows still have for them in 2020, and the answer from ARD entertainment coordinator Thomas Schreiber sounds a bit as if he had just bathed in his pajamas in front of the TV set.

Schreiber says: “It is still a special moment when the three German-speaking countries broadcast a joint show program on Saturday evening. As a rule, these are programs that – regardless of whether through music or games and fun – not only connect countries , but also people. ” Through the Eurovision, the public in Germany gets to know special artists or candidates from Austria and Switzerland – and vice versa. “A good Eurovision show still has what it takes to build bridges in front of an audience of millions on Saturday evening.”

In 2020, Eurovision shows will have run a total of 14 evenings in the first – from the “Feste” shows with Florian Silbereisen to “Understand fun”, “Small versus large” and the new “Quiz without limits” to the “New Year’s Eve Show” on December 31st . December. Schreiber: “The number of Eurovision shows has been relatively constant over the years.”

Oliver Heidemann, head of entertainment at ZDF, confirms: “The importance of this collaboration [mit ORF und SRF] is still high, because developing programs for such a large broadcasting area is of course an attractive task. “As a rule, the broadcasters involved decide together what is to be produced. Their entertainment managers are in regular contact with them -” and not just about specific projects , but also about all other practical and strategic aspects of TV entertainment, “says Heidemann. When it comes to shows, ZDF cooperates primarily for the” Helene Fischer Show “(which is canceled this year due to Corona) Special edition of “Wetten, dass ..?”

In view of the increasing eurosceptic tendencies in some countries, the time might even be ripe to celebrate this type of cooperation a little more often than before. Or as Pilawa put it in the announcement for his new show with a mischievous Pilawal smile: “One will win on Saturday evening at the ‘Quiz without Limits’. Bet that?” 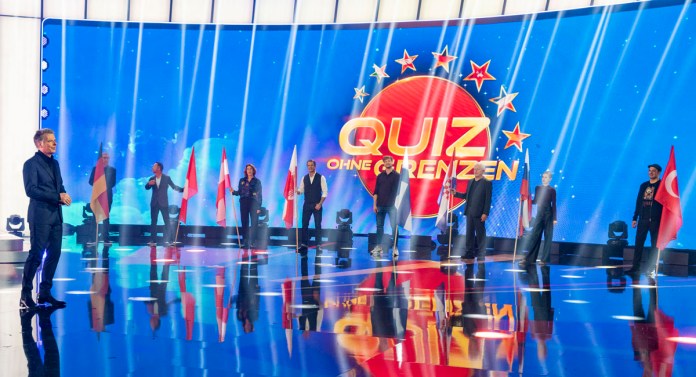 Bring on the entertainment quirks!

The latest quiz cooperation is, of course, first and foremost an allusion to the legendary “Games without Borders”, which ran on German television between 1965 and 1980 and where teams from different European countries competed against each other in slide, spin and balance games. The new edition with Michael Schanze was short-lived in 1989, and in the mid-noughties the European Broadcasting Union (EBU) announced a revival that never came.

Perhaps it is also okay that the classics of the past cannot be exhumed so easily, especially since there is a risk that their magic could be shattered by the habits of the present. (Just ask Jörg Pilawa about his experience with the “Germany Champions” in 2003.) But that doesn’t mean that you can’t try new approaches.

“Already some ideas” have been developed jointly by the broadcasters from Germany, Austria and Switzerland, confirms ARD entertainment coordinator Schreiber – like the “Quiz without borders” now. But let’s think that it would be much bigger and get a boost from other partners from the broadcasting union on board in order to celebrate at least once a year – and parallel to the Eurovision Song Contest – a kind of best of the most successful shows in Europe. (As soon as that is possible again.) An evening in several languages, with popular elements from Italian, Danish, Croatian and German television, in order to be able to sniff the entertainment peculiarities of the nations!

TV Council Presidency to be awarded

This public service evening could be organized in the best EBU tradition with annually changing country responsibilities (ideally, of course, without a broadcaster having to go completely into debt because of the effort involved).

If you like, we will take over the premium directly – with a German TV Council Presidency for the very first European “Show without borders”. In order not to overwhelm the audience completely, Günther Jauch can win again in the end, or for a change Markus Lanz, so that he doesn’t have to look so sad when he doesn’t think of the name of the well-known Belgian master detective shortly before the near-victory. (Hercule Poirot! – the Karl Lauterbach of crime literature, so to speak.) Then the other nations connected via Eurovision have something to wonder at how the strange Germans hide their Saturday evenings. What is not done for international understanding.

And with that: back to Cologne.

The first edition of “Quiz without Borders” can be viewed in the ARD media library.

Kiels Lee toying with transfer: “Son told me that HSV is...

More and more deaths in Germany – especially in Saxony