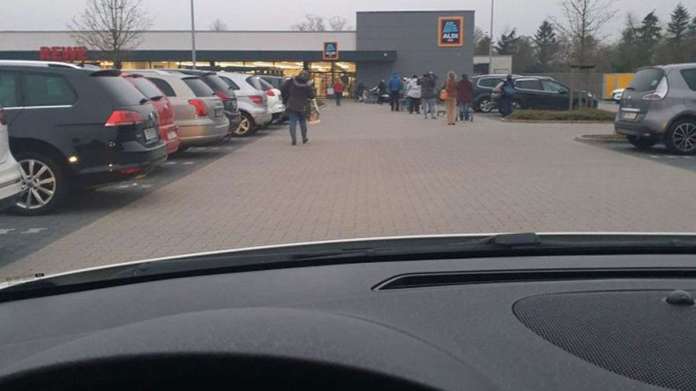 Do you remember?! At Aldi there was a phenomenon in the 00s that a customer now remembered.

Stuttgart – A long, long time ago a big one developed Hypewhenever it is at Aldi offered a PC or laptop. The result: long lines in front of the branches on the first day of sale. But at some point consumers will have discovered that there are good (or even better?) Devices to buy elsewhere. Of course, there are still smaller queues for special offers at discounters – but no longer the famous “PC queues”.

“I assumed the ‘PC queues’ at Aldi have been around since the 2000 nimma.”

But that’s exactly what a customer felt now remembered when she drove into an Aldi parking lot. And posted a photo Twitter. The user, who according to her information is in Baden-Wuerttemberg alive, saw a long line in front of an Aldi branch. And she got rid of what came directly to her mind: “I assumed the ‘PC snakes’ at Aldi have been around since the 2000 nimma.”

I assumed the “PC queues” at Aldi have been around since the 2000 nimma. pic.twitter.com/FK8u8FDXR9

Aldi: Classic offer queue? Or is it due to corona limits

Is it really a classic offer queue? Not every follower believes that: “Well! Only one customer on 20 square meters, ”says one. Sure, the Corona rules stipulate that only a limited number of customers are allowed in stores of any kind. This is of course also checked in many places by security guards or the employees (depending on the size of the shop) – and so it just builds up in front of the door of Aldi and other shops. If you want to avoid waiting, it is best to avoid the typical peak times.

Aldi: The customer is after Christmas decorations

Or was there a good offer that made the queue extra long? This is indicated by a conversation under the post. “Are the hamster purchases going on again?” Asks a Twitter user. “Christmas decorations“Replies the lady who took the photo. “Then I’d better not ask if you got anything else. The early bird catches the worm. ”By the way: Christmas decorations are also available elsewhere.

The photo itself – an Aldi line – is not all that spectacular. The Flashback to the legendary “PC queues” in front of discounters, however, should be for some cozy Nostalgia to care. A very ugly incident that was recorded in the video, however, occurred in another Aldi branch. (lin)