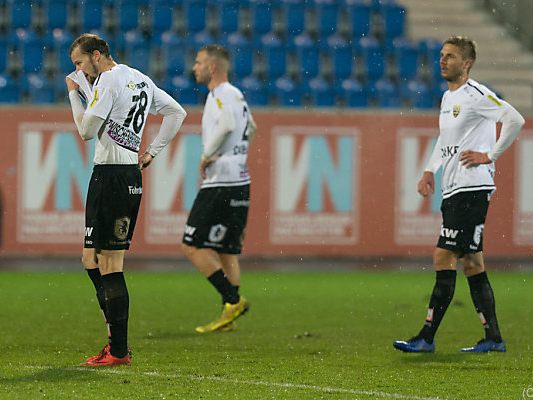 
Altach experienced a home debacle against St. Pölten
© WHAT

Altach coach Alex Pastoor seems to be at the end of his game. “A disappointment can hardly be greater,” emphasized the Dutchman on Saturday evening in an interview with Sky after the 4-0 home debacle against SKN St. Pölten, with which his team fell back to the relegation rank of the Bundesliga. He was now “fed up”, Pastoor stated several times afterwards, and would like to replace his entire team.

Six winless compulsory matches, in which, apart from the 0-0 four weeks ago, in the home game against the also ailing Vienna Austria, and 367 minutes without a goal in the league are clear proof of how weak Altach is currently. Even in the second round of the Cup, the SCR lost 2-1 at fourth division Vienna a week and a half ago. Even then, Pastoor counted mercilessly with his team and spoke of a “scandalous performance” with which his players would have let the whole club down. But now he went one step further.

“We ask ourselves a lot of questions, of course, but there are too few answers. If you start a game like this, it still works. But when I see how to deal with someone injured – that has happened before. And one too Yellow-red card has happened several times. That doesn’t mean we have to stop playing football. And I’m fed up with the fact that everyone simply plays for themselves. After the yellow-red card, St. Pölten has against ten individuals Player played and not against a team, “said the Altach coach with a view to the early injury of defender Anderson in the tenth minute and the exclusion of Nosa Edokpolor in the 36th minute.

“And I’m fed up with individual mistakes,” added Pastoor, who was only reasonably satisfied with his performance in the “last 10, 15 minutes before half-time”. His team would have “at least tried to play well with the ball. But these individual mistakes are not possible. You cannot defend yourself against this, you can train, you can discuss, have video analysis, but also have from meetings and video analysis I’m more than full of myself, “affirmed the 54-year-old.

He was of course aware that his team hadn’t gone into the game with too much self-confidence after the recent negative series. “But when it is clear how we play (…) that we have to be hot for the second ball – and that just doesn’t happen. And when we then have the second ball, we just hit it forward – then I think either my German is so bad during the week or it’s so bad from the assistant coach, but then we are on a different track, “said Pastoor, clearly at a loss.

The fact that after the deficit, “then the trust decreases, that is not illogical, is it? They are only human. But I do not understand that they go to battle like sheep,” annoyed him, as he did against Vienna lack of attitudes of his professionals.

When asked how much hope he still had for the last two games of the year – away next Saturday against newly promoted Ried and then a week later on December 19th in Hartberg – Pastoor’s answer was: “If a coach is looking for hope then he’d better stop because it doesn’t work that way. But we can’t replace a whole team, that’s nonsense, too. But let’s think again. It’s something you never really think about, but why Not.”

He knows that there is much more to his players, they have “shown it more often”. “But football is not just sun on your face and wind on your back, it’s like today – rain, cold, setbacks. And if you deal with it that way, then I also know how the last two games are going.” It will be interesting to see how the club management will react to this ruthless accounting by Pastoor.

“Earth Hour”: Lights out for the climate

Arizona and Wisconsin confirm Biden’s victory – and Trump is raging...

India: No Corona – but a mysterious disease has broken out

Corona variant is spreading: WHO: Already eleven cases outside of Great...

Only today: Media Markt is launching great deals on Treat yourself...