Great Britain, together with the EU, would have to extend the transition period for Brexit and thus concentrate entirely on the fight against the corona pandemic.

Now the worst-case scenario occurs, the worst possible case. Chaos not only because of the unregulated Brexit, but also because of the mutated corona virus. The British get a foretaste of what threatens if their country also leaves the internal market and the customs union at the end of the year after leaving the EU. Namely a travel and Transportchaos on both sides of the English Channel.

A few days before the end of the transition period for Brexit, it remains unclear how the UK and the EU could regulate their future economic relations. A Point of contention are still the future fishing rights of EU fishermen in UK waters. Another is the EU’s demand that competitors on their doorstep commit themselves to fair competition rules in return for free access to the internal market.

All deadlines to get a deal properly closed have passed. Even if an agreement is reached in the next few days, neither the British House of Commons nor the EU Parliament will have the time to examine the extensive treaty. Great Britain and the EU states are even considering putting a possible agreement provisionally into force with a view to the short time before ratification.

That would then be the opposite of democratic control, supposedly the driving force behind the Brexiteers. There is a comparatively simple way out. Boris Johnson would only have to apply for an extension of the transition period, which expires at the end of the year. That would be sensible and understandable.

Because he should now focus not on fishing quotas, but on the fight against the corona pandemic. But Brexit, a project of self-harm by Great Britain and all of Europe, has never been driven by reason.

But the double chaos in his cynical calculation may come in handy for Boris Johnson. The British prime minister can more easily blame the economic turmoil caused by Corona and the exit from the internal market on the EU.

News from Formula 1 – Alonso after a bike accident in... 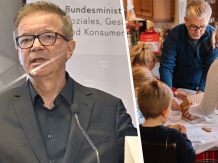 The CL competition helps a lot: Gladbach loses and celebrates it...

Anti-Semitism expert: “Something is growing in Germany that makes life more...