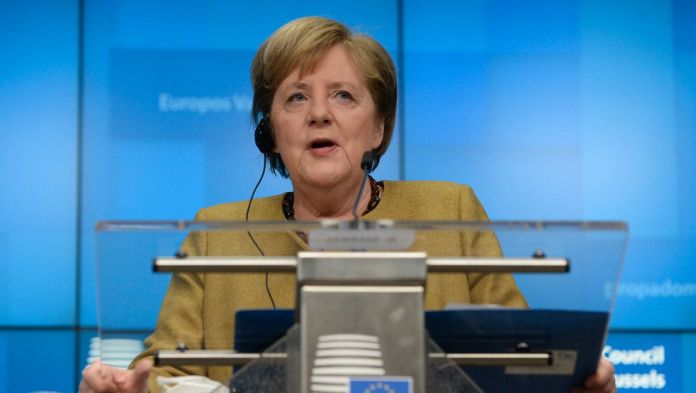 Angela Merkel recently appeared a bit more tired after every EU summit. That did not seem surprising: the corona crisis, the ongoing dispute over the EU budget, the capers of US President Donald Trump and 15 years as head of government had apparently consumed the Chancellor.
On Friday, however, Merkel looked downright fresh, although she negotiated practically the entire night. The debate on tightening the EU climate target was surprisingly controversial, and it was not until the early morning – after a total of 21 hours of negotiations – that the agreement was reached. “But it was worth it not to sleep one night,” says Merkel. She is also relieved about the agreement on the budget on Thursday: “A stone has fallen from my heart.”

Next to Merkel are EU Council President Charles Michel and Commission Head Ursula von der Leyen. You praise Merkel effusively. “I want to pay tribute to the Chancellor,” says Michel. “She has rolled up her sleeves.” In view of the agreement on major issues, one could rightly be satisfied, said von der Leyen. Budget, corona package, climate target – “what a triple!”

High price for the budget agreement

The Chancellor’s relief can be seen at this moment. The German government had been preparing for the EU Council Presidency in the second half of the year for months. Then the corona virus not only thwarted many of Germany’s plans, including the EU-China summit. It brought the EU a crisis of the century – on top of all other problems.

Some of them came together at the last summit of the year. The most important was the dispute over the budget. For four days in July, the heads of state and government struggled over the seven-year EU budget of 1,074 billion euros and the corona recovery package worth 750 billion euros. Hungary and Poland blocked the adoption of the package in order to prevent the disbursement of EU funds from being tied to compliance with the rule of law.
The other EU countries and the Commission threatened to launch the Corona package without Poland and Hungary and to drastically reduce structural funding next year. In the end, Warsaw and Budapest accepted the rule of law mechanism with a non-binding additional declaration – something that Hungary’s Prime Minister Viktor Orbán in particular had rejected shortly before.
But the price is high: Poland and Hungary have managed to water down the rule of law mechanism considerably in the months of tussle. After all, at the summit, the compromise that Merkel had previously negotiated with the two blockers was approved after just 20 minutes. This cleared the way for the € 1.8 trillion budget and corona package, which many participants are now praising as historic. On Friday, the ambassadors of the EU countries started the procedure for implementing the resolutions.
“That was primarily Merkel’s success,” says an EU diplomat. It was not until the afternoon before the summit that the ambassadors of the other states first saw the draft compromise. If another country had negotiated the compromise with Orbán and Poland’s Prime Minister Mateusz Morawiecki, “the other 24 governments would have looked at it very, very carefully,” said the diplomat.

But since the deal came from the Germans, there was a leap of faith – which was also due to Berlin’s permanent representative Michael Clauss. In recent months he has played an unusually prominent role for an ambassador in Brussels. Merkel publicly thanked Clauss after the summit – “even if that is perhaps a little unusual,” as the Chancellor said.

Criticism of the climate compromise

The settlement of the budget dispute was also central because it paved the way for the tightening of the climate target: by 2030, the EU now wants to reduce its greenhouse gas emissions by at least 55 percent compared to 1990 levels. Previously, a minus of 40 percent was aimed for. Without an agreement on the budget, the more ambitious climate target would hardly have been possible, if only because it would have been unclear how much EU money the individual countries would have had available for climate protection measures. (You can read an analysis of the climate agreement here.)

The climate debate began at dinner on Thursday evening. With tomato and zucchini soup, sea bass and citrus fruit salad with honey ice cream, the discussion about CO2 savings and their effect on the economy. The debate went on all night. France, for example, wanted nuclear power to be classified as a transition technology, while Poland, which was heavily dependent on coal-fired power, demanded more money for the energy transition. Prime Minister Morawiecki was satisfied in the end: his country would receive more than 50 billion euros for a “just, appropriate transformation.”

The next crisis is already waiting

Environmental groups criticized the compromise found in the end as inadequate: For the global climate target – limiting global warming to 1.5 degrees compared to pre-industrial times – that was not enough. Merkel was satisfied with the 55 percent. “I don’t want to imagine what would have happened if we hadn’t achieved this goal.”

Merkel will not be able to look forward to the agreement for long. Because the next crisis is already waiting. The expected final deadline for a trade deal with the UK ends on Sunday. The transition period ends on December 31, during which the country will still have free access to the EU’s internal market and customs union after Brexit. If there is no agreement by then, there is a risk of chaos at the borders in the new year and enormous damage to the economy on both sides.

You now have only “low expectations” that a deal will be completed in time, said Commission chief von der Leyen on Friday. A little later, the British Prime Minister Boris Johnson added: The negotiations had stalled, a no-deal was “very, very likely”.

Transfer plans allegedly at risk due to Tolisso injury

The iPhone 12 with MagSafe and the pacemaker: Apple makes its...

Free of charge today: anyone who works from their home office...