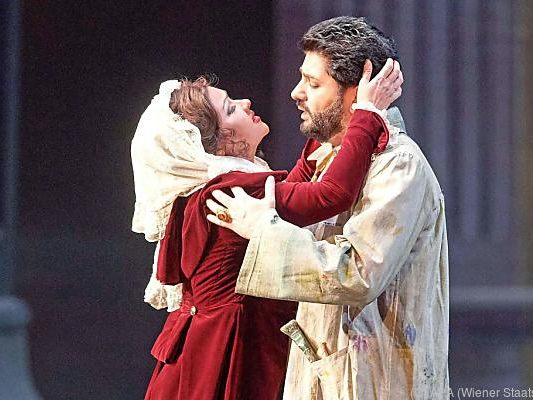 The Vienna State Opera could have sold out several times this evening. Would have. Because of the corona, the hallowed halls of the Haus am Ring remained largely empty on Sunday evening – despite Anna Netrebko’s Viennese role debut as “Tosca” in Puccini’s audience hit. Only a few professional observers were allowed to attend the TV broadcast under strict security precautions, which could be seen live-time-shifted on ORF III or heard on Ö1.

The monumentality of the acoustics of the publicly closed State Opera is reminiscent of that of the Church of Sant’Andrea della Valle in Rome, in which the first act of the opera takes place. It takes a conductor like Bertrand de Billy, who has returned from the State Opera, who always gives the notes the necessary space in the right places. With him Netrebko had already worked out the game for the New York Met in March – which, however, had to be canceled by the lockdown. This time the two parties involved were spared this fate.

Nevertheless, Anna Netrebko is known to be a double corona victim, as the singer even had to go to hospital in September because of pneumonia as a result of a Covid infection. The voice has not harmed the disease, as the 49-year-old has now demonstrated. The Russian soprano is still on its way to a darker timbre. Netrebko also acted calmer than one might have expected. Her Tosca is not the uninhibited diva, but an almost underplayed, calm figure with mistakes and fears.

At her side as lover Cavaradossi is her husband Yusif Eyvazov, who in the beaming party next to his wife sounds as if he is singing with a mask due to the pandemic. Here, however, the direct comparison also clouds the perception. The trio of state opera role debutants was completed by Wolfgang Koch, who offered a solid villain Scarpia who does not match the archaic force of colleagues like Bryn Terfel, but is undoubtedly scary enough.

Believe it or not, the 619th performance of Margarethe Wallmann’s directorial work does not have to hide in the canon of the history of the production. In 1958 NASA was founded, Charles de Gaulle President of France and Wallmann “Tosca” celebrated its premiere at the Ring. Manned lunar missions have not taken place for decades, De Gaulle died 47 years ago – but the “Tosca” continues to jump into death.

While director Wallmann has not been among the living for 28 years, her “Tosca” lives on. Since 1958, almost 1.3 million people have suffered the two hours of love, struggle and passion in Nicola Benois’ stage design, which is now more than amortized.

So the Wallmann “Tosca” is and remains the undisputed regent of the State Opera productions even under the new director Bogdan Roscic – and since he replaced Josef Gielen’s “Madama Butterfly” from 1957 with the newly purchased Minghella production at the beginning of his management she is also the oldest. “You can blaspheme the Wallmann ‘Tosca’, but it is still great,” Roscic once assured the APA: “In the last few years I have seen around ten new ‘Tosca’ productions that are not even in the Close to the quality of Wallmann. ”

Wallmann’s “Tosca” makes other works on the house look old – or rather young. Franco Zeffirelli’s “Boheme” from 1963 got 443 “ridiculous” performances. And Otto Schenk’s “Rosenkavalier”, which premiered in 1968 ten years younger than “Tosca”, currently has 395. December will bring a new musical production under neo-music director Philippe Jordan.

The singing couple Netrebko / Eyvazov, on the other hand, can be seen in their roles in Austria this summer – but not in the State Opera, but at the Salzburg Festival in the staging of Michael Sturminger, which was taken over from the Easter Festival. Shouldn’t Corona interfere again.

New version of the scooter presented